Loopholes in parliamentary system exploited around the world 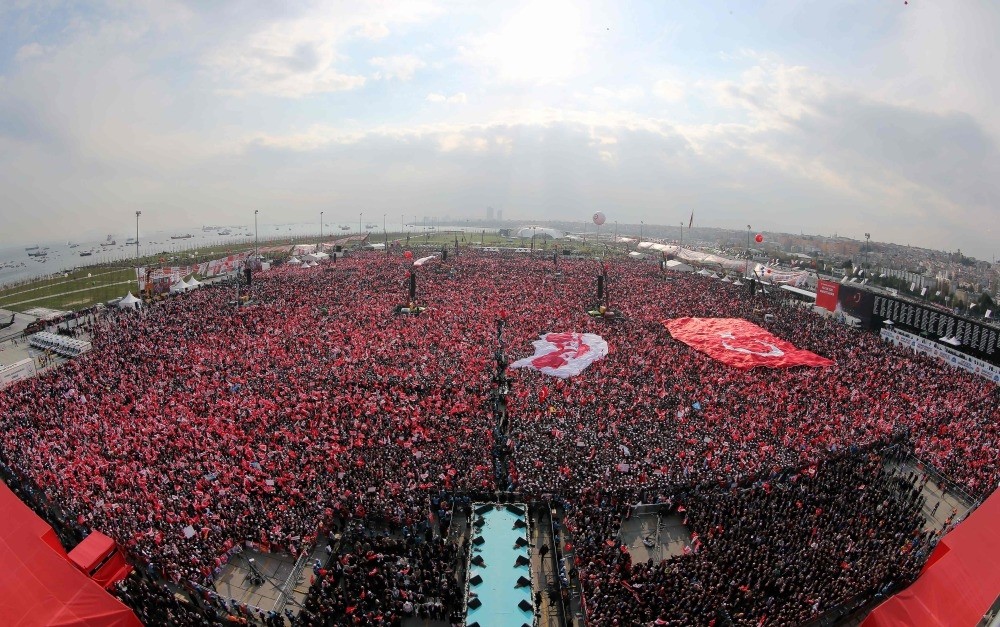 Turkish people waving the national flag and 'yes' banners as President Erdou011fan delivers a speech during a rally for the constitutional referendum at the Yenikapu0131 Square in Istanbul, April 8.
by Pervez Bilgrami Apr 10, 2017 12:00 am

The Western media coverage of the proposed referendum and almost all the news articles in India are publishing a flawed narrative, saying that with the system change, Turkey will drift towards authoritarianism and one-man rule. The fact is that the so-called authoritarianism is not the monopoly of a presidential system. There are numerous examples of authoritarianism in parliamentary systems, where prime ministers have ruled their countries in total disregard of democratic values. This has happened both in affluent European societies and poorer nations of South Asia.

In the last few decades, theorists and experts of democracy have found it quite natural to discuss what system suits a particular country. When a political party gets a super majority in the country's parliament, the leader of that party or the prime minister can use these extra powers to pass the laws in favor of his own political gains. All these unconstitutional and undemocratic acts can make the prime ministers in parliamentary democracies dangerous dictators.

India, the largest democracy in the world, has seen regular democratic transitions since its independence from British colonial rule in 1947. India witnessed the 21-month-long draconian rule in 1975 and 1976 when the then prime minister Indra Gandhi unilaterally declared a state of emergency in the country and suspended the citizens' basic civil rights.

In Bangladesh, Sheikh Hasina Wajed of the Awami League and Khaleda Zia of the Bangladesh Nationalist Party (BNP) abused the super majority of their parties in parliament to pass the laws that favored their own authoritarian power. Sheikh Hasina, the present prime minister, passed the law that annulled the earlier law necessitating the formation of a neutral caretaker government to conduct free and fair parliamentary elections in the country, thereby manipulating her win in the 2014 parliamentary elections, which were subsequently boycotted by Zia's BNP.

Similarly, those in Europe who oppose Turkey's referendum on political reforms must realize that in the EU itself many of their prime ministers in parliamentary systems behave like tin pot dictators.

In Poland, a parliamentary democracy, the electoral victory of the right-wing Law and Justice Party in October ushered in a number of troubling developments. The new government promptly pardoned the notorious head of the country's security services, who had received a prison sentence for various abuses of power. Significantly, prime minister Beta Syzdlo's government is the first full majority government in Poland since 1991. The most alarming measure occurred when the new government ignored several rulings of Poland's Constitutional Court. One of these rulings invalidated the government's attempt to replace five judges with five new appointees. Syzdlo defied the court and brought in the new justices anyway, to hold the positions supporting the government's actions at will.The situation is not much different in another EU parliamentary democracy, Hungary, where Prime Minister Viktor Orban, who won the 2014 parliamentary election with a two-thirds majority, has earned a reputation as a leader vehemently opposed to immigrants coming into his country. Now that kind of conduct violates basic human and democratic values. Orban's views on governance are so extremely authoritarian that critics within the European Union brand them "xenophobic."

It is a clear case of double standards of political evaluation when President Recep Tayyip Erdoğan haters link his long stint in power through successive democratic electoral victories as growing authoritarianism. They never raise questions about German Chancellor Angela Merkel's nearly 12-year reign. Furthermore, Merkel has already announced her candidacy for the fourth consecutive term in the upcoming election in September 2017. In fact, their continuity in power in the respective countries is absolutely lawful.

The above examples clearly suggest that the concerns regarding the executive powers of a president in the presidential form of democracy do not carry much weight, and even in the parliamentary model prime ministers can pass unconstitutional and undemocratic laws with the help of their super majority in their respective parliaments.

The ongoing Western media war of disinformation against Turkey is based on half-truths, ignorance and lies about the proposed executive presidency. With their obvious short memory, they forget that the Justice and Development Party (AK Party) has been running the full majority government in Turkey since 2002, and that in the 2007 elections then Prime Minister Erdoğan had a two-thirds super majority in Turkish Parliament.

With the emergence of right-wing racial and xenophobic political parties in Europe and elsewhere, their parliamentary democracies are turning authoritarian and undemocratic.

TIME TO CHANGE THE DAMAGED ONE

In a country like Turkey, which has been prone to both bloody military coups and soft coups due to its damaged governing system, the elected parliaments were abolished and prime ministers ousted in the past by abuse of legal provisions. The proposed presidential government in Turkey will cure some of those systemic diseases that have infected the nation's body politic for decades. It is time to overcome the problems created by the tutelage interests against Turkey's average citizens.

In view of the ominous events from past military dictatorial regimes, causing huge human suffering and colossal loss to Turkey's chances of development, the proposed presidential system in Turkey will, hopefully, not only strengthen the political stability that the country has achieved in the last one-and-a-half decades, but it will also substantially help in removing the remnants of deep-rooted military and bureaucratic tutelage.

The proposed changes in the Constitution reflect President Erdoğan's most genuine concerns for seeking Turkey's political stability while keeping up the ongoing process of its economic development. Undeniably, a politically stable Turkey with its basic human concerns can play a vital role in restoring peace and stability in the region. The Western media, instead of indulging in the acts of yellow journalism against Turkey's upcoming referendum, must come out of their bigotry and respect the people's will in Turkey.