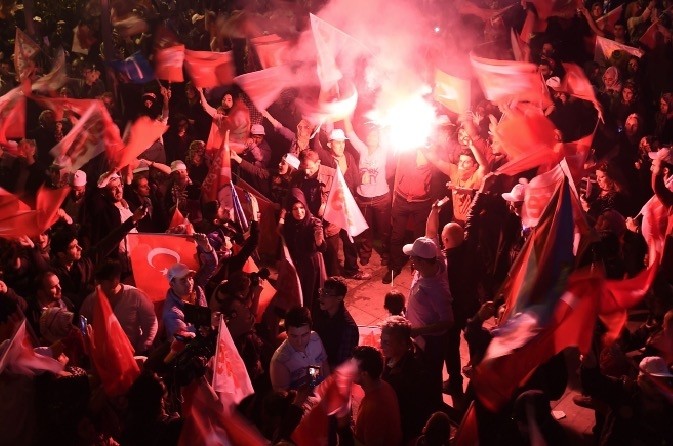 Turkish people waving their national flags as they celebrate the victory of the 'yes' campaign in Sunday's referendum, Istanbul, April 16.
by Adem İnce Apr 18, 2017 12:00 am

I wrote an op-ed for Daily Sabah on Nov. 5 in 2015 comparing the change in the Kurdish votes between the June 7 and Nov. 1 general elections. In the introduction section of my article, I stated that "the Kurdish people now seem to play a determining role in Turkey's elections, and they help to shape the political landscape of the country, which makes them a powerful actor in Turkish politics." The result of Turkey's recent referendum on the presidential system proved once again that the Kurds are indeed a major political force in Turkish politics.

THE RESULTS OF THE REFERENDUM

The "yes" camp claimed a narrow victory in Turkey's constitutional referendum with 51.4 percent of the vote, which was lower than the expectations of the ruling Justice and Development Party (AK Party) and the Nationalist Movement Party (MHP). People have already begun to discuss the reasons behind this outcome and how this happened. Who voted for "yes," and who voted for "no" in the referendum? There are, of course, several reasons and factors affecting the result, but one thing is crystal clear: In all the Kurdish majority provinces located in eastern and southeastern Turkey, the percentage of "yes" votes is significantly higher than that of the AK Party's vote in the Nov. 1 general elections held in 2015. Similarly, the percentage of "no" votes in the same provinces are significantly lower than that of the pro-PKK Peoples' Democratic Party's (HDP) vote in the 2015 general elections, given that the AK Party and the HDP are the only two "major" political parties in these provinces.

WHY DID KURDISH PEOPLE VOTE FOR 'YES'?

Before the referendum, I had a chance to have a chat with a lot of Kurdish constituents in both Siirt and Batman provinces. Based on the impression I got from their views, I actually expected that there would be an increase in the "yes" votes in comparison to the AK Party's votes in the Nov. 1 general elections, however, this was not something I expected. The Kurdish people that I spoke to about the referendum mentioned a number of reasons of why they would be voting for "yes" in the referendum. For example, some of them said that they were sickened by both the PKK's and the HDP's policies, especially their "digging ditches" policy, and therefore they would be voting against "no," which was defended by both the PKK and the HDP. This was even seen in the rallies held by the HDP in the region, as the number of people attending their rallies was way lower than before, which was a sign of the decrease in support for the HDP.

Furthermore, a number of others specifically mentioned the hostile treatment by certain European countries toward the Turkish officials including Family and Social Policies Minister Fatma Betül Sayan Kaya, all of whom tried to speak at "yes" rallies in European cities, but were ultimately prevented from doing so. Some told me that they would have normally voted for "no" in the referendum because the proposed changes did not convince them to vote "yes," nonetheless, they were convinced otherwise by the European countries. Indeed, some of the European countries' hostile actions during the propaganda period have greatly affected a group of voters both in and outside Turkey. It could be argued that even a lot of Turkish voters were actually motivated by these actions to vote for "yes." It seems some Kurds were also affected by these developments and they reacted to all of these.

Having said all of this, it is also worth mentioning here that the Kurds I have spoken to were not happy with the "AK Party-MHP alliance," either. They said they felt uncomfortable with the fact that the conservatives (AK Party) are acting together with the Turkish nationalists (MHP), who do not have sympathy for them. This is understandable, as it is obvious that the MHP has always denied the notion that there is a Kurdish problem in Turkey, and they have also criticized almost every reform implemented by the AK Party government in order to improve the Kurds' rights during the reconciliation process between 2009 and 2015.

WHAT SHOULD THESE RESULTS MEAN?

These results obviously indicate that there has been a continuous decrease in the support for both the HDP and the PKK in the region since 2015, and the recent results are even more important, as the "yes" camp in the constitutional change consisted of the AK Party and the MHP, which might well be considered as a "conservative-nationalist block." Thus, despite the conservative-nationalist characteristic of the "yes" camp, surprisingly, a considerable number of the Kurdish people voted for the "yes "campaign in the referendum. The Turkish government, therefore, should take this decision very seriously and keep improving the Kurds' rights. There are still a number of critical issues to be solved such as the mother tongue (Kurdish) instruction in public schools. I guess it is time we discussed all of these again, and the failure of the reconciliation process involving the HDP and the PKK should not discourage us from doing so.

* Ph.D. Candidate in Sociology at the University of Leeds, U.K.