New system needs to be well-adapted in Turkey 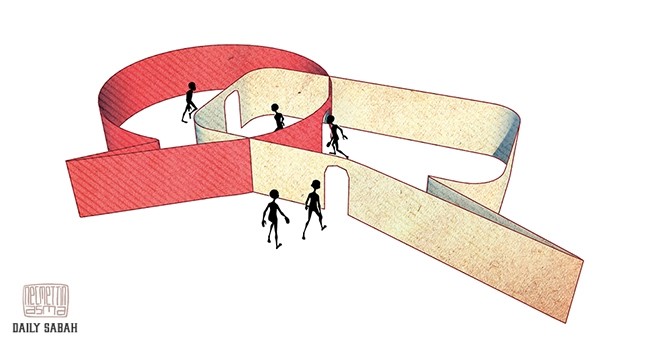 All actors in Turkey should now stop questioning the legitimacy of the polls, which is very hurtful to the country's democracy, and take steps to rationally adapt the new system

On April 16, Turkey voted in a referendum for the seventh time in its Republican history. The "yes" vote to change the governing system from the parliamentary system to a presidential one gained the majority with 51.4 percent. In addition, some 85.4 percent of the Turkish people voted in the referendum, a much higher participation rate compared to other democratic countries around the world.

The opposition bloc claimed that the referendum results were invalid because there was an undemocratic atmosphere in the country during the vote due to the state of emergency. It was an empty claim because both campaigns in the referendum could freely propagate on any platform during the referendum process.

Meanwhile, the state of emergency, which was declared after a deadly coup attempt on July 15, only concerned the country's national security. Despite this smear propaganda, which was carried out by the Kemalist elites and their Western "allies," the Turkish people gave the world a lesson in democracy with its high participation rate.

It should be briefly noted that the 2017 referendum was made in the name of a revision to the 1982 constitution, which was prepared following a military coup on Sept. 12, 1980. In the current Constitution, the president has a lot of responsibilities but is not allowed to administer in practice, making him/her a symbolic president.

Moreover, there was always the possibility of the double-headed crisis between the president and prime minister due to the governing system. The referendum was very important in eliminating these two big problems.

Also, the July 15 coup attempt, which was perpetrated by members of the Gülenist Terror Group (FETÖ) who had infiltrated state and military institutions, showed just how broken the system of government was. It made clear how important it was to renew the system and fight against the secretive Gülenists in the state.

President Recep Tayyip Erdoğan has, for years, championed the notion that a presidential system in Turkey would make it stronger and more democratic. Similarly, other prominent conservative leaders have always supported the idea of the presidential system to remove the current hegemonic bureaucracy and tutelary circles.

However, none of them had managed to change the governing system. It was not their failure but the strong resistance of the bureaucratic structure, the weakness of politics and the presence of a century-long parliamentary tradition.

The expected systematic change appeared on April 16 when the "yes" campaign won with 51.4 percent of the votes.

The "no" campaign's propaganda and discourse were very stereotypical, such as the one-man rule claim, and they were unable to focus enough on the content of the proposed changes. These empty claims were one of the reasons for their defeat.

While the vote resulted in a defeat for the "no" bloc, it was also a warning message to the Justice and Development Party (AK Party). The AK Party is an unprecedented successful political party in Turkey, beating its opponents in every election it has entered without a serious contender. But this time the "yes" votes were not much more than the "no" votes. It would be unfair to describe the current victory for the AK Party as a Pyrrhic victory but AK Party authorities should analyze the results in detail and find who or what is responsible for the loss of their popularity.

On the MHP front, the situation was complicated. While MHP Chairman Devlet Bahçeli supported the "yes" campaign, there were others in the party who supported the "no" bloc. His internal party opposition that cooperates with Western circles and other MHP-opposition party representatives tried to isolate Bahçeli, one of the founding elements of the new emerging system.

Meanwhile, the Kurds ended up being the decisive factor in the referendum. Compared to the results of the Nov. 1 elections in 2015, they put their weight behind the AK Party by voting "yes." It was very apparent that they stood with the ruling AK Party and reacted against the Kurdish nationalist Peoples' Democratic Party's (HDP) terror-supporting politics.

Kurds were free to vote as they wished this time around as opposed to the Nov. 1 elections when the outlawed PKK terrorist organization threatened them if they supported the AK Party. The PKK's pressure in the region was nearly eliminated by security forces through counterterror operations.

To sum up, the AK Party, the MHP and Kurdish voters shaped the outcome of the referendum.

CHP Charmain Kemal Kılıçdaroğlu was the main leader of the "no" campaign in the referendum process. The "no" bloc also contained the HDP, opposition in the MHP, minority oppositions, small leftist circles and terror groups such as the PKK and FETÖ. They failed to accept the reality that the referendum was beyond party politics but about the common state system and they just carried out anti-Erdoğan or anti-AK Party propaganda instead.

NEW ERA IN THE POLITICAL SYSTEM

The much-debated system found a legal response from the Turkish people on April 16. It will be a good opportunity for Turkey to experience a non-partisan atmosphere in the elections. From now on, the parties will have to call out to the masses at large rather than at their own bases, which will help more technical and concrete politics to emerge. As contemporary democracies work by the rationalist point of view, Turkish society showed its rational side on April 16. Democracy means the acceptance of the results from the polls regardless of the decisions. Thus, it is now necessary to adapt to the system instead of questioning its legitimacy.