Making the most of a post-Western world 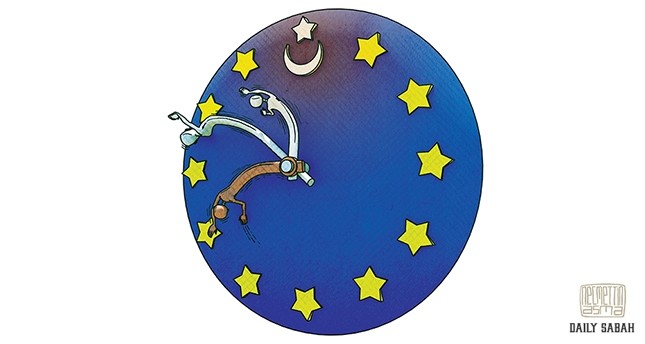 The term "post-Western world" was coined by a Brazilian social scientist, Oliver Stuenkel, who gave a presentation of his book of the same title to the Valdai Discussion Club - an international intellectual gathering hosted by Russia - in October of last year. The term was so popular among those who were trying to make sense of the global transition we are now witnessing that it found its way to this year's Munich Security Conference. Seeing the term utilized in Munich indicates that the "post-Western world" is a term that is now being acknowledged even by the West. However, the West is hardly prepared to understand or grasp the term; let alone embrace it. Why should the West embrace it, you may ask? The answer lies in this: Embracing something you cannot change is the only means to shape it. This starkly realist outlook is too disconcerting for those still clinging onto the glorious discourse of the Western civilization as it warns of the impending darkness that its alternatives may create. However, the post-Western world is not even an alternative to Western civilization; to the contrary, it is the reality that is now looming on the horizon, albeit having seemingly arrived already. Oliver Stuenkel discusses this state of denial as the refusal to see "the creation of a new phenomenon, which is the rise of institutions led by non-Western powers." Instead, those who still cling to the Western civilization discourse also talk of a darkness devoid of alternatives that is descending into post-Western chaos.

In a recent New York Times article, David Brooks rightfully points out the parameters of the discourse on Western civilization as a global standard setter: The values of discourse based on reason, a religiously informed public space that is "not dominated by theocracy" and, perhaps most significantly, setting a "standard for what great statesmanship looks like." The post-1945 order of the free world is based upon that same discourse, which was taken one step further to "what great statesmanship ought to look like." This mission of shaping the world through the skeletal framework of institutions led to an erroneous belief that all over the world this "gave diverse people a sense of a shared mission and a common vocabulary."

At the edge of a new road toward a post-Western world, we see that this has not always been the case, and will be less and less so. Is this the descent into chaos that has been foretold by those who cling to the discourse of Western civilization? Or, is there a brave new world in the making that we can all embrace and shape together? I emphasized the latter and warned of the dangers of insisting on the former, at the German Marshall Fund's Brussels Forum three years ago: I warned that "we" in the West only wanted to listen to what we wanted to hear and maybe 20 years from now, we will still be the same people talking within the frames of thought that have been built on the same concepts dating back to the post-1945 world order, while the world outside will have changed beyond our recognition and "we" will no longer be part of it. Needless to say, my points created a lot of discomfort among most of the participants in the forum. However, the danger of not wishing to see or hear of impending change and trying to save the status quo by clinging onto its beautiful ideals from yesteryear is summed up in the words of David Brooks:

"It is as if a prevailing wind, which powered all the ships at sea, had suddenly ceased to blow. Now, various scattered enemies of those Western values have emerged, and there is apparently no one to defend them."

This is the crux of the problem: those who are not devoted to saving a declining paradigm built on a Western civilization-based discourse are now, by default, its "enemies." Creating labels of "otherness" is a very dangerous practice because in doing so, one needs tangible examples to fix those labels. In today's world the easiest, most reckless label of "otherness" that nudges the protectors of the discourse of Western civilization into their comfort zone is Islamophobia. Anything that fails to impress upon itself the indignant defense of a declining liberal world order is immediately coined together with Western-derived notions such as "Islamist" and the infamous "Islamist terror." It is so easy to label and so neatly differentiated from "Islamic." Again, a Western differentiation. Muslims are not going to suddenly sigh with relief and say, "Oh, you meant Islamist and not Islamic? That's okay." For Muslims, the association of their religion with terrorism is equally offensive, whether you label terrorists as "Islamic" or "Islamist." When Western leaders insist on this differentiation so they can comfortably use the term "Islamist terror," to the Muslim world this is portrayed as foolish arrogance. The problem with those who cling to the discourse on Western civilization is that they have too many blind spots which are dangerous because, as history has shown us, blind spots are among the causes of war.

When did the defenders of the discourse of Western civilization develop these blind spots? It all happened when they lost the real meaning behind the discourse they so passionately defended; a discourse which eventually became an insipid repetition of rhymes nobody could remember the meaning of. If the free world order no longer sang this tune, it would be because they have lost the spirit of Kennan and Acheson. Men who built a post-war world order did so on the basis of a certain quality of ideas and values that were, at the end, humanistic and, therefore, essentially universal because deeply ingrained in that worldly outlook there was also humility.

After a while, their words as well as Wilson's points became etched into an oft-repeated rusty nameplate that they dusted off and put on the table wherever they went - whether it was the post-Communist space of eastern Europe or the mind-boggling topography and sociological transformation of the Euro-Atlantic's own "near abroad." In fact, placing this rusty nameplate on every table became such a commonplace, albeit lazy reflex that those who upheld the order of the free world forgot what those etched words were all about. Anything they could no longer grasp was left to the comfortable cruise of international institutions placed on auto pilot. But, institutions are not living things. They only breathe if their members believe in the reasons why they were created. After a while this lazy reflex of churning out the same old nameplate led to the dark comfort of making sense of change through the lens of prototypes. And this is where and how they have come to the brink of losing Turkey. By trying to read the transformation of the Turkish state through the lens of these prototypes. When a changing Turkey did not fit any of these prototypes, the institutions on auto pilot exerted knee-jerk reactions simply because they could understand what is unfolding before them. And, this is precisely why we are living in an age where the trust in international institutions is widely diminishing.

Turkey's transformation, politically and sociologically, is something that was bound to happen. At a certain juncture in history, this transformation spiraled at a dizzying pace via the propelling force of a strong leader. No transformation is smooth, effortless or painless. As Turkey's troubled past - riddled with intermittent military coups, unstable coalitions, social unrest and suppression of freedoms - turned into a new era of transformation, the West has neatly labelled the drivers of this change as "authoritarian" and "Islamist." Suddenly, Western alarm bells began to ring as Turkey began "drifting away" from the fold. None of the hysterical Erdoğan- bashing antics of some European states in the run up to Turkey's constitutional referendum took the following into consideration: Turkey suffered a bloody coup attempt only nine months ago by a clandestine group embedded in its state structures. The trials are just beginning against the perpetrators and members of this group. Confessions, documents, testimony, footage from security cameras and countless other forms of evidence are only now coming to light, with more layers of deceit being unearthed with every indictment. Meanwhile, Turkey faces a three-pronged war on terror: against Daesh, the PKK and its Syrian offshoot the Democratic Union Party (PYD) in Syria and the Gülenist Terror Group (FETÖ) - the group that carried out the coup attempt, which was designated as a terror organization by Turkey's National Security Council just months before the coup attempt. While Turkey is trying to maintain its freedom-security balance under very difficult circumstances, it held a referendum which saw remarkable voter turnout at 85 percent. This outcome will lead to the transformation of institutions long in need of a re-haul as the old system of governance which included two elected heads, no presidential accountability and a patchwork of amendments built on a constitution dated from the military coup of 1980 that was no longer efficient or workable. Turkey will do all it can to secure its border from the terrorist threat of both the PKK and Daesh and quell any separatists terror within its borders. It will be a pro-active player in the region and will continue its ties with its moral hinterland of peoples of the same faith and shared cultures. It will, at the same time, continue to be an invaluable partner and ally of the Trans-Atlantic partnership. Doing one does not cancel out the other. If anything, Turkey is just the friend the West needs to come to grips with a post- Western world. Those who cling to the discourse on Western civilization need to ask themselves: Are we going to shape the post-Western world together with partners who know the region like Turkey, or are we going to bring on that inevitable descent into chaos which we fear so much?

Share on Facebook Share on Twitter
Previous in Op-Ed President Erdoğan's official visit to India will strengthen Turkish-Indian... Next in Op-Ed Every year the global community pauses on April 29 to remember the...
DAILY SABAH RECOMMENDS