Turkey-Russia rapprochement: An energy alliance or a deeper friendship? 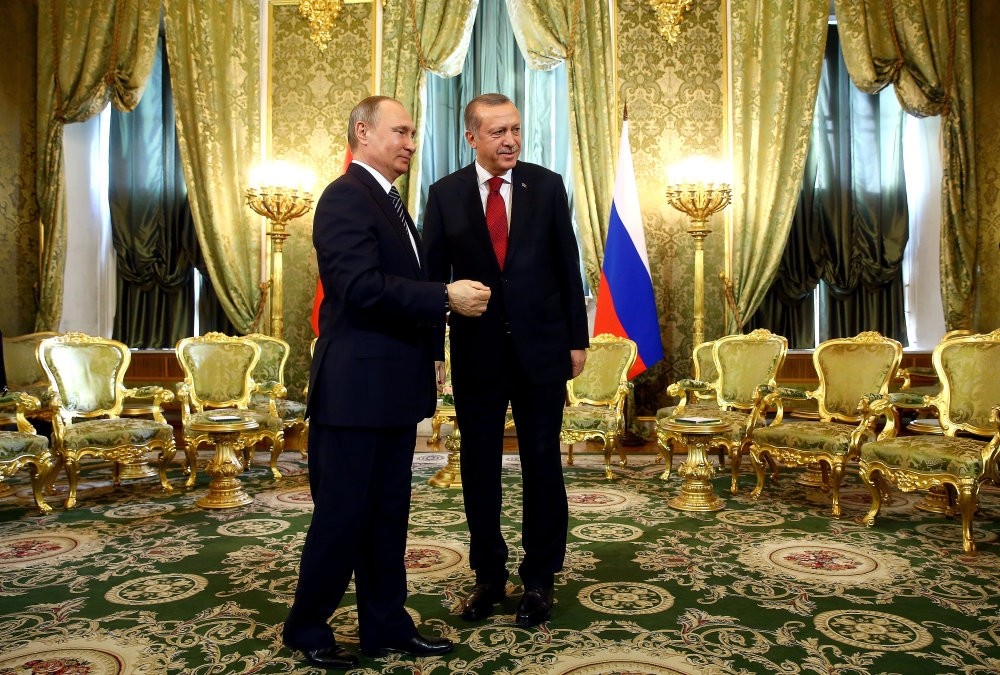 Turkish-Russian relations, which have experienced ups and downs since the jet crisis, are apparently now better than ever. But the upcoming meeting between Erdoğan and Putin may even further it

Politics and economy intertwine, and often they intertwine in a weird way. With global tensions sharply pronounced and the world dangerously polarized, economy, our breadwinner, increasingly succumbs to power politics.

Commercial benefits and economic prosperity, the core drivers of European integration in the 1950s and the founding fathers of the European Union, the bloc, today, has given way to diplomatic maneuvering and sophisticated scheming.

The EU, once a successful alliance of the European nations is now falling apart due to the short-sighted political decisions and ill-conceived policies ruining its economic foundations.

Power politics is the prime tool of the present U.S. administration that has won the White House under the guise of "Making America Great Again" and jumped to gunboat diplomacy as a way to accomplish it.

Economic prosperity is not a priority on the presidential agenda of the Donald Trump administration. It seems to be reluctant to give the American people the golden age of the 50s and 60s that made millions around the globe come to believe in America's greatness.

Turkey and Russia are not immune to global political trends either. With economic co-operation once a backbone, the present rapprochement is falling victim to politics.

Actually, in the context of the present realities it's just well expected: the regional security and peace in the Middle East are the core matters waiting for a solution, and by means of diplomacy and political compromise.

Both countries sincerely believe that peace in Syria is the only way to resolve the current conflict.

"Our goal is a fair and permanent peace deal as demanded by the Syrian people," Deputy Prime Minister Numan Kurtulmuş said.

Turkey and Russia unambiguously support a peaceful solution to the Syrian crisis. Their national leaders meeting on May 3 in the Russian seaside resort of Sochi is due to contribute to resolving this matter of high international priority.

According to the Russian side, the meeting agenda covers the overall complex of the bilateral relations and will touch upon the most important international and regional issues to include combatting terrorism.

BACK ON TRACK, BUT…

Nearly a year has passed since presidents Recep Tayyip Erdoğan and Vladimir Putin met in August 2016 in St. Petersburg to relaunch the relations that were badly damaged by the jet crisis of November 2015.

The co-operation in the field of energy is a success story. Development of the Turkish-Russian mega pipeline, TurkStream, is speedily gaining momentum.

The Russian state-owned energy giant Gazprom, the project front runner, has announced the start of construction this summer of a submerged section of the connector's first line. It's been announced as well that it's expected to be completed by the end of 2019 as has been originally planned.

The TurkStream is a replacement for the South Stream gas pipeline that was planned to carry 63 billion cubic meters (bcm) of Russian gas through Bulgaria to the EU, but never came into being and its plans were fully aborted by Russia in autumn 2014.

Following up on the project closure, Turkey and Russia instantly announced in December 2014 their plan to build a submerged Black Sea pipeline of a similar capacity and it was met by the international community as a surprise, though it is a promising development.

Nevertheless, progress with the TurkStream went slowly, its negotiations almost immediately ran into difficulties and were put on stand-by due to the jet crisis of November 2015.

The TurkStream project got a fresh start after the Turkey-Russia leaders' meeting in August 2016 in St. Petersburg and since then has increasingly gained momentum.

Though no clarity has been established yet on the Russian gas deliveries to Europe, the required agreements have been secured on construction of the TurkStream's first line to deliver 14.5 bcm of gas for Turkish consumption.

After the line is commissioned, the Russian natural gas will start coming to Turkey bypassing Moldova and Ukraine, replacing the capacities of the currently operational TransBalkan pipeline and making this transit route useless.

If Gazprom succeeds in making gas agreements with the EU, construction may soon start of TurkStream's second line across the Black Sea and passing through Turkey till the Greek border in order to supply the European countries with the Russian gas.

Progress has been achieved as well with the construction of the first nuclear power plant, the NPP, giving birth to the Turkish nuclear power sector. Turkey and Russia made an agreement on the NPP's construction in Akkuyu in 2010, but no meaningful progress was accomplished prior to October 2016 when things started moving, backed by the speedily recovering Turkish-Russian relations.

The project is to be undertaken by Russia's Rosatom at an estimated cost of $20 billion.

As recently announced, the required permits and licenses will be ready by next October to make it possible to proceed with the construction of the NPP.

Jointly with the reactor's foundation plate, they are the prime structures of the NPP and the announced start of their active construction is February 2018, which will mark the launch of the main project phase.

Regardless of the promising developments in the energy sector, certain issues between Turkey and Russia continue remaining unresolved. The Sochi meeting on May 3 is expected to contribute to removing the stumbling blocks.

According to Turkey's ambassador to Moscow, Hüseyin Diriöz, the "relations in the areas of economy, trade, energy, tourism and human relations will be assessed. Additionally, our efforts regarding work permits and restrictions in the business world continue."

The trade in agricultural products is a pressing issue on the agenda.

After the unfortunate jet incident, Moscow imposed a ban on the import of certain agricultural products exported from Turkey during the past 25 years.

The imposed restrictions were partially removed in March 2017, but fresh tomatoes and cucumbers, key export items that accounted for $300 million per year before the jet crisis, still remain banned.

In its turn, in March 2017 Turkey imposed a heavy import duty of 130 percent on Russian wheat and corn, and virtually closed the market for the import of these commodities.

Besides the intensive co-operation in the field of energy, Turkish-Russian relations have been boosted by the regular personal contact of the country leaders.

They contribute to building trust and mutual understanding in matters of high international priority and to enhancing Turkish-Russian interaction by co-operating on the battlefield and in weapons procurement.

Both sides confirmed that contract details for purchasing the C-400 anti-missile systems will be discussed by the presidents on May 3 in Sochi.

The newly acquired dynamics bring Turkish-Russian relations to the level of enhanced partnership. They have the potential to further shape the political road map of the countries' relations.

The upgraded level of interaction gives additional leverage to Turkey and Russia in the context of the present Middle East developments, when opposite, and often conflicting, interests of the two countries and the U.S. clash in the Syrian crisis.

Matters of regional peace and security are the prime issues on the Turkish-Russian priorities agenda.

Russia has been engaged in combat operations in Syria since September 2015 when it started delivering airstrikes on Daesh-held positions in Syria and virtually saved the Assad regime army from its complete defeat.

Thanks to success in Syria, Russia has won back its power position in the Middle Eastern affairs. As a follow-up, it masterminded a tripartite alliance of itself, Turkey and Iran that secured a cease-fire in Syria in the last days of December 2016, and launched in January 2017 the Astana process for the resolution of the Syrian crisis.

By succeeding with this effort, Russia made itself a mighty regional player.

For Turkey, Syria and Iraq are the immediate neighbors and an ongoing military confrontation is a direct concern to its national security.

Turkey has been fighting terror groups since the 1970s and knows all too well that diplomatic negotiations alone are not enough to address the national security threats mushrooming on its southeastern borders.

Turkey did this to prevent the terror group from sending terrorists, arms and munition into the country. Turkey is determined to clear Syria and Iraq from the PKK and its affiliate, the People's Protection Units (YPG), and will not let them make Sinjar a "second Qandil," as President Erdoğan recently put it.

It may further destabilize the situation in Syria and Iraq.

In the meantime, for Turkey matters of national security and eradicating the terror threat are of the utmost concern and may come to prevail over political compromise and sophisticated diplomacy.

After all, the recent Turkish airstrikes were launched prior to President Erdoğan's visit to Sochi, and later on to Washington, D.C.