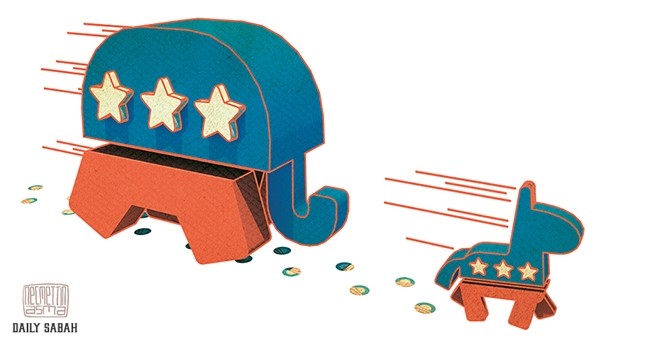 Imitating the Obama tactics in relations with Ankara can only help Trump to deepen the crisis between Turkey and the U.S. but nothing more or less

On April 17, the Associated Press published an article titled, "Trump's Syria plan starts coming into view." The article argues that though Donald Trump's plan for Syria is still evolving, it has come into clearer view particularly after the U.S. military launched a tomahawk cruise missile attack against a Syrian air base to punish Bashar Assad for a chemical weapons attack.

The article introduced the breakdown of the strategy into three basic phases: defeating Daesh, reestablishing stability in war-torn Syria and finally safeguarding a political transition period in which Assad eventually will be advised to step down.At first glance, the strategy seems genuinely promising and totally different than the utterly disastrous strategy of the Barack Obama administration. When Donald Trump entered the Oval Office, he found the Middle East in-tray bulging with urgent issues.

Whenever the opportunity arises, Trump releases his biting criticism of Obama's foreign policies. He has even labelled Obama the "most terrible president" and described his foreign policy a "total failure."

Obama's major failure stemmed from his shortsighted refusal to capitalize on Turkey as a major regional NATO ally and establish a more active role to stabilize the region and fight radical terrorists. Trump repeatedly reiterates his support for Turkey "as a strategic partner and NATO ally.'' He knows the strategic geopolitical significance of Turkey as a NATO member that borders Syria, Iraq and Iran.

Turkey has been frustrated by what it sees as Obama's disinclination to hand over Fetullah Gülen, the man who orchestrated the coup attempt in Turkey last year. Turkey has also been at odds over Obama's support for the Syrian terrorist group, the People's Protection Units (YPG), which is an offshoot of the outlawed PKK terrorist organization that has been killing Turkish and Kurdish people for years now.

Nonetheless, Trump's actions, which are louder than his words, definitely assert that his Middle East plan is self-contradictory and confusing.

For instance, he intends to swiftly crush the radical apocalyptic cult of Daesh and pompously declare a landslide triumph. He aims to prove to the American public that he will trump Obama not only on chemical red lines but also on the 'war on terror.' To achieve his ultimate goal, Trump has stated that an agreement with Russia is inevitable. Trump has offered the survival of the Assad regime for a mutual effort to defeat Daesh.

However, the American forces are inclined to continue using the same tactics as the Obama administration. That means training and counting on local Kurdish militant groups to lead the battle against Daesh.

Despite accusing his predecessor of being the "founder of Daesh," Trump's strategy to annihilate the group is blindingly analogous to that of the Obama administration. The strategy remains typically built on coalition bombings coupled with the use of Kurdish terrorist troops on the ground.

The only slight declared difference is that his administration will cut any help to the moderate opposition simply because Trump does not have any idea who those moderates are.

On April 25, Turkey announced its first concurrent, synchronized, main air operation against the terrorist PKK-linked targets in Iraq and Syria. The Chief of General Staff Hulusi Akar reiterated that operations will not halt as long as the threat prevails.

Seemingly, the attacks were not coordinated with the U.S.-led coalition. The unilateral move triggered unfathomable fury among the American military officials. As an outrageous response, the U.S. military deployed its troops along the border in an exceptional show of esprit de corps with the terrorist YPG affiliates.

Ankara's undeclared swift operations appeared to be measuring and probing the plans and seriousness of the new administration in Washington in liaising with banned PKK-affiliated Kurdish armed militias in northern Syria and Iraq.

President Recep Tayyip Erdoğan said he was "extremely upset" by the pictures of U.S. armed troops carrying the American flag and escorting members of terrorist organizations in Syria. Turkey reckons that the outlawed YPG aims to connect Afrin to the lands it grips east of Manbij, thus creating a contiguous strip of Kurdish militant-controlled land in north Syria.

Undoubtedly, the Trump administration recognizes that its support to Kurdish terrorist militias in Syria would lead to the deterioration of relations between the United States and Turkey. Furthermore, it may eventually expedite Turkey's possible departure from NATO's orbit.

Washington risks jeopardizing its relations with Turkey and should be advised to consider its orientations before it takes the plunge.

Turkey succeeded in intervening and thwarting those plans when its forces embarked on the cross border Operation Euphrates Shield in August 2016. The liberation of al-Bab in February after a long and bloody battle against Daesh boosted Turkey's chances to prevent the terrorist organization from achieving their goal of establishing a hostile statelet on the country's borders.

HOW IS THE RAQQA PLAN?

Ankara has not concealed its concerns over the U.S. military's partnership with the terrorist Kurdish paramilitaries in Syria. Recently, a senior adviser to President Erdoğan, İlnur Çevik, said U.S. forces might be in danger of being hit by Turkish fighters watching the instable border region with Syria.

Turkish troops are reportedly massing across the border town of Tal Abyad, but those military movements are related to Turkish readiness to take part in the battle to retake Raqqa. The easiest way for Turkish troops to get to Raqqa is through Tal Abyad.

Turkey's insistence to be part and parcel of the imminent operation should be rationally, strategically, militarily, ethically, and realistically understood. Just like what is going on in Mosul, there appears to be little planned in terms of who will control Raqqa after Daesh is defeated.

Will the Kurdish terrorists take control? Almost certainly not, the majority of the population of the city and the adjoining cities and towns are Arabs and Turkmens and they will not accept being managed by the Kurdish militias.

More importantly, Turkey demands the terrorist Kurdish groups to withdraw back to the areas east of the Euphrates.

Will the Assad regime take control? The same problem insists. Will the people of the city be willing to replace the existence terror of Daesh by the state terror of Assad and his sectarian proxies? The Syrians and the whole world are watching how brutal and sectarian those allies to Iran in Mosul and other parts of Iraq actually are.

The Turkish-American relations sit on the brink of a steep cliff and the potential for further conflict is clear, unless Turkey, the U.S. and Russia manage to achieve a compromise deal that alleviates the tension and satisfies each party's regional strategic aspirations.