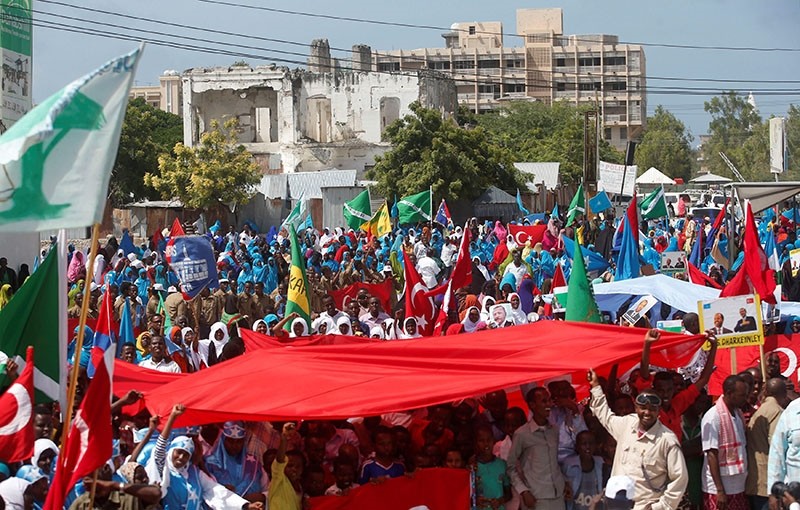 Somali people carry Turkish and Somali flags as they gather in support of Turkish President Recep Tayyip Erdou011fan and his government in Somalia's capital Mogadishu, July 16, 2016. (Reuters Photo)
by Mevlüt Çavuşoğlu May 11, 2017 12:00 am

The message of the Turkish government's enterprising and humanitarian foreign policy is that Turkey is a partner that sees beyond the current headlines and looks forward to a future when Africa, including most definitely Somalia, will attract international attention as a continent of peace, prosperity and opportunity

Much has happened since President Recep Tayyip Erdoğan, together with his spouse and six government ministers, landed in Mogadishu in 2011 to give the Somalian people and the world a historic message. At a time when Somalians had almost lost all hope in their future, the president had reassured them that Turkey believes in the future of Somalia and that Somalians will not walk alone. And, just when no world leader dared to visit Mogadishu in two decades and no country committed to help, President Erdoğan led the way.

In the intervening years, Turkey has pulled all levers to help bring Somalian development back on track. Turkey has built a vast network of infrastructure including roads, the Mogadishu airport and harbor. The Recep Tayyip Erdoğan Hospital provides healthcare at international standards to Somalians. A former president of Somalia, Mr. Hassan Sheik Mahmoud, was to describe the Turkish way of development partnership in vivid terms: "The Turkish model in Somalia is very, very clear… They said we want to do this thing in Somalia, and they do it." He added: "Today Mogadishu is cleaner because of the support of the Turks. They provided the garbage collection trucks and everything and the city is cleaner today." Turkish Airlines has remained as the sole non-African airline regularly connecting Mogadishu to the world. Turkey has embraced all of Somalia and all Somalians and has done this earnestly.

Since 2011, Somalia has come a long way. Somalia is now proceeding on the path of stability and development. It has instituted a federal state and successfully conducted presidential and parliamentary elections. Governance institutions are being built step by step. President Erdoğan's visit marked a turning point and we have come to the point when the London High Level Conference this week will bring together a large coalition in support of Somalia. I am grateful that the U.K. and U.N. have heeded Turkey's long-time call to engage in efforts to assist Somalia's normalization.

Notwithstanding significant progress, there is much more to be done. In the economic field, Turkey has already contributed over $600 million to Somalia's development projects. There is a Somalian National Development Plan with a set of concrete objectives. In order to facilitate the realization of this plan, the international community can erase the debt burden of Somalia and support a prioritized set of national objectives. We must also support President Muhammed's strong emphasis in tackling corruption and instituting good governance that would use resources to be made available to Somalia by the international community and of course its own resources effectively to the benefit of the whole of Somalia. Somalia is endowed with rich human and natural resources and a strategic geographical location. We need to support them tangibly and predictably in their development efforts.

As we know from experiences from around the world, peace and development go hand in hand. It is paramount that the Somalian government has a capable regular army under its command in order to address the threat of Al Shaabab terror organization. Military training in this regard is an important priority. Turkey will fully operationalize the Anadolu Military Training Center in September this year. We hope that officers and soldiers to be trained at this center and others will form the muscle of the Somalian government to defeat Al Shaabab terrorism.

As Somalia works hard to put the country on development track, it faces natural disasters as well. The repeat of the 2011 drought this year is a case in point. As we look at the predictable and committed long-term support of the international community, we must not forget the immediate needs of over 6 million Somalians for urgent food assistance. Under President Erdoğan's leadership, Turkey has again acted swiftly and launched an aid campaign this March. The Turkish Red Crescent is mobilizing to deliver significant food assistance before the approaching month of Ramadan. The drought impacts not only Somalia and the international community must act rapidly to provide similar assistance to all of Eastern Africa which is afflicted by the drought.

The message of the Turkish government's enterprising and humanitarian foreign policy is that Turkey is a partner that sees beyond the current headlines and looks forward to a future when Africa, including most definitely Somalia, will attract international attention as a continent of peace, prosperity and opportunity. This will need further joint effort but it can be achieved.