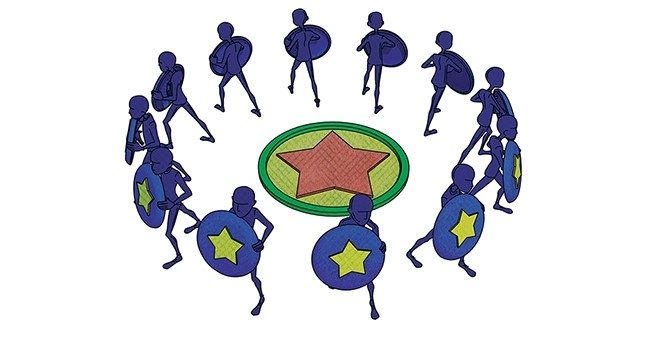 European countries have become haven for the PKK, allowing the elements of the terror group, which has been waging a war against Turkey for 40 years, to propagate freely

Even though the PKK is on the terrorist list of many countries and organizations, including the U.S., U.K. and the European Union (EU), some European countries still treat the group as if it were a nongovernmental organization. What is more disappointing, is that the PKK terror attack that took the lives of 44 and wounded 166 in Istanbul on Dec. 10, 2016, was not classified as an act of terror by some EU officials.

Over the years, Europe has held significance for the PKK in two ways. First, there are large numbers of Turkish citizens living in Europe, most of whom moved there in search of work since the 1960s. Secondly, Europe is a political center for the PKK and this has offered the group suitable conditions for development and activities.

As a result, for the PKK, Europe became an active area of operations, beginning roughly around the 1980s. Prior to that, it had established its links within the continent at a sympathizer level and decided to take many of its members and supporters out of Turkey to avoid extra casualties. Upon that decision, some of its key members fled to Syria and Europe. The PKK wanted to gather citizens of Kurdish origin and acquire financial resources as well as human capital. And, although unfortunate, the attitude of some European countries made its activities possible.

After 1990, the developments in Europe gained momentum for two different reasons. The first issue was the political uncertainty that arose from the collapse of the Soviet Union, while the second was the rising international interest in the "Kurdish question," pushed onto the world agenda by the Gulf Crisis.

In the meantime, the PKK considered Germany as a significant base and center, in terms of its organizational activities in Europe.

The PKK organizes its activities under the cover of the "German Democratic Kurdish People's Center," which used to be YEK-KOM (Kurdish Associations Federation in Germany). It collects money under the guise of donations and membership of different organizations and organizes meetings to conduct serious propaganda. The PKK also has its publications in Germany. Its first publication, Serxwebun, was published in Cologne back in 1982. Its Turkish language daily "Özgür Politika" (Free Politics) has also been published from Neu-Isenburg, Germany since August 1995.

After the Gülenist Terror Group's (FETÖ) failed coup attempt on July 15, 2016, the "Democracy Platform against the Coup" organized a meeting in support of democracy on July 31, 2016, in Cologne. President Recep Tayyip Erdoğan was scheduled to address the meeting via video conference. However, a German court order did not permit this to happen and the only way his message could be delivered was to be read by someone from a piece of paper.

Nevertheless, just five weeks later in September 2016, a Kurdish Culture Festival was organized in Cologne. Cemil Bayık, one of the PKK's top leaders, sent a video message from the PKK's headquarters in the Qandil Mountains.

During the festival, pictures of terrorist PKK's imprisoned leader Abdullah Öcalan's and some other dead terrorists were posted. The PKK's emblems were on display and toy guns were distributed among children. In addition, the PKK's Syrian offshoot the PYD's co-chairman, Salih Muslim, also gave a speech at the festival, where he praised Abdullah Öcalan and made false claims about Turkey.

Recently, Germany forbid the Turkish Minister of Justice and Minister of Economy to discuss the new presidential system with Turkish citizens living in Germany, allegedly because of insufficient parking space. It is indeed a contradiction how Germany does not allow high officials from Turkey, a NATO member, and its ally, to give speeches, yet gives a green signal to a terrorist organization leader's video messages.

Another interesting incident took place in Brussels last July. A photo exhibition featuring pictures of PKK and PYD terrorists was held at the European Parliament. The exhibition was hosted by the vice president of the parliament's progressive alliance of socialists and democrats, but it was condemned by Turkish officials.

It is also a known fact that the PKK and its affiliates control around 80 percent of the European drug cartel and since it is one of the most important regions in the global drug trade, the PKK is using this region for its benefits.

The PKK's involvement in narcotics trafficking through Turkey shows that the group uses the money extracted from narcotic traffickers and refiners in order to finance its operations and is directly involved in transporting and marketing narcotics in Europe.

The PKK's participation in the drug trade has been noted in a number of U.S. Congressional testimonies and hearings. The Annual Dayton Model United Nations Conference and the Counter-Terrorism Committee has also listed the PKK among other terrorist organizations involved in illegal drug trade.

Furthermore, it is also very important to clarify the situation regarding the PKK affiliates that are operating under different names, which can be used by some media organizations to confuse people, as they can say that an attack was not carried out by the PKK.

The responsibility for the Istanbul bombings last December was assumed by the Kurdistan Freedom Falcons (TAK). Accordingly, it begs the question of what is the TAK or who are the members of the TAK? It is, in fact, another terrorist group operating under the the PKK.

The TAK's main purpose is to organize and carry out terror attacks in bigger cities and city centers. Nevertheless, all in all, they are a subdivision of the same terror group.

The PKK has been using Europe as a fertile ground almost since its establishment. But, Turkey, a NATO member and EU member candidate, has been fighting this terrorist organization for over four decades.

It should never be overlooked that toleration for the PKK will definitely lead to undesirable outcomes for some European countries, because of terrorism's boomerang effect.