BSEC, a platform for boosting co-operation in the Black Sea region 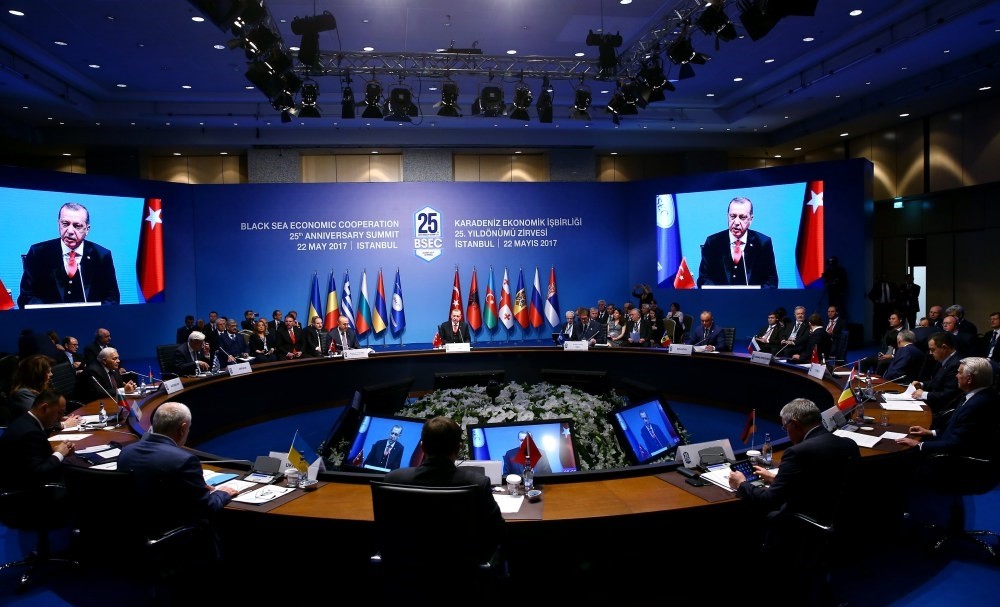 President Recep Tayyip Erdou011fan, center, speaking during the Black Sea Economic Cooperation (BSEC) Summit in Istanbul, May 22.
by Maria Beat May 23, 2017 12:00 am

By providing a base for multilateral co-operation to its member countries, the BSEC builds interaction with international agencies and initiatives in the Black Sea region

With the world in turmoil and its institutional architecture in shackles, international alliances and partnerships are experiencing a rapid change and sweeping reshuffle. Politics apply pressure on the economy, while the economy, the backbone of human development, rebuffs to safeguard its resilience. The ongoing processes trigger political conflicts and economic crises, while also having a tendency to progress.

The phenomenon inter alia brings into focus the regional co-operational organizations where matters of politics and economy intertwine closely together to become virtually inseparable.

AN ALLIANCE OF THE BLACK SEA NATIONS

With the Syrian crisis at the top of agenda, the focus of international attention has shifted from the wider Black Sea region to the Middle East. Still, the region enjoys a unique geographical location neighboring Western Europe in the west, stretching its eastern borders as far as Central Asia, while encompassing Russia in the north, and rubbing up against the Middle East in the south.

The area is the second-largest source of oil and natural gas after the Persian Gulf, not to mention its rich proven reserves of minerals and metals. As well, today it's in the process of becoming a major East-West transport and energy transfer corridor. As such, the Black Sea region enjoys tangible benefits and faces demanding challenges, while regional co-operation is a high priority.

The Black Sea Economic Co-operation Organization, BSEC, is the very international organization whose priorities agenda is topped by the matters of economic co-operation and regional integration.

In brief, the BSEC is an organization promoting cooperation between 12 countries, namely Albania, Armenia, Azerbaijan, Bulgaria, Georgia, Greece, Moldova, Romania, Russia, Serbia, Turkey and Ukraine. Its headquarters are located in Istanbul, Turkey and it is recognized as a full-fledged international economic organization since the coming into force of its charter on May 1, 1999.

The member countries established the BSEC in pursuit of a common desire to create a universal platform for multilateral co-operation to complement their bilateral ties. They've made multi-profile dialogue their prime tool of interaction and communication regardless of differences in the levels of economic development and geopolitical orientation.

BSEC emerged as a free-will alliance of the Black Sea nations in the early '90s when Turkey was the only regional country unaffected by the ongoing transformation of the post-Soviet world. This made Turkey a natural center of an emerging regional integration to replace the outdated practices of economic co-operation prevailing in the Black Sea region in the Soviet times.

In pursuit of it goals and within a span of its 25 years, the BSEC has developed an exclusive corporate culture to accommodate the goals of economic development with the means of sophisticated diplomacy in pursuit of their accomplishment.

The BSEC is celebrating its 25th anniversary. H.E. Ambassador Michael Christides, the secretary-general of BSEC's Permanent International Secretariat has shared with Daily Sabah his vision of the BSEC on the occasion of its anniversary summit on May 22.

By providing a platform for multilateral co-operation to its member countries, the BSEC builds interaction with international agencies and initiatives and is in a good position to organically supplement the ongoing integration processes in the Black Sea region.

"We are an international organization that wishes to establish working relations with other international organizations and of course with other states, besides our member states. The more relations, the more co-operation with other organizations we have, the better for us and for the region," believes Ambassador Christides, "We have close relationships with many U.N. organizations like the UNDP, UNESCO, FAO, the World Tourism Organization, etc. and we are promoting common projects with them. We are envisaging a much closer co-operation with the U.N. agencies in the sectors of training and education, and of course we would like to be more project-oriented in the fields of transport, trade facilitation and energy. We also value our relations with Brussels and have a very good relationship with the EU, because the EU is one of the greatest promoters of projects in the Black Sea region, so we are very much interested in either being part to these projects or having our projects partially funded by the EU."

A backbone of the BSEC's successful performance is good relations between its member countries. The ongoing Turkey-Russia rapprochement is of indisputable benefit for the BSEC.

"This improvement certainly does affect our performance," Christides pointed out. "Russia and Turkey are our two very important founding members with the biggest economies in our organization, so the better their relationship is, the closer their bilateral co-operation is, the better it'll be for all. There is no doubt that the better their bilateral relations will be, the more positively they will be influencing our activity. So, we would like very much to see this improvement continue and we also wish for an improvement in the bilateral relations between other member states."

Project development is the basic guiding principle of the BSEC. This line of activity has received a tangible support of the Russian Federation that signed in autumn 2016 a donor agreement to transfer $ 1 million to the recently established "Black Sea Project Promotion Facility."

"We are very grateful to the Russian Federation for this support and these funds will be used jointly by our organization and the Black Sea Trade and Development Bank for promoting projects that will have an effect on as many member states as possible. Russia's one-time voluntary contribution provides financial backing for projects in the most promising fields of interaction like energy efficiency and green technologies, small and medium business, infrastructure development and trade facilitation," Christides said.

"This mechanism will certainly operate within the BSEC's fundamental principle, under which mutually beneficial joint projects must not be subject to politicization and must not create any problems for any BSEC member," stated Russian Foreign Minister Lavrov in December 2016, who pointed out that "any BSEC country can use the Black Sea Project Promotion Facility to receive funding for projects to promote economic co-operation in the Black Sea region."

Energy and transport have been the sectors of the BSEC's successful integration of the elements of regional co-operation since the very start of its activity. As an established institutionalized infrastructure for regional development, the BSEC has instantly become a natural framework for the successful development of an emerging alliance between Turkey, Azerbaijan and Georgia in the field of energy.

Regional integration gained its first success with the Baku-Supsa oil pipeline establishing a route for Azeri crude to the Black Sea coast by passing through Georgia. That accomplishment took away the doubts about the feasibility of construction to Turkey of the Baku-Tbilisi-Ceyhan, (BTC) oil pipeline and later on the Baku-Tbilisi-Erzurum (BTE) gas connector. Further on and in line with this development, an agreement was made on the construction of a new rail road connecting Baku with Kars in Turkey via Tbilisi that is due to become operational within the next couple of months.

The wider BSEC region geographic location is its natural asset. With the East-West ties growing in importance due to the powerful economic development of China, the BSEC's transit potential has every chance of receiving an additional boost. China's announcement of its ambitious financial initiative, the One Belt One Road project, is of major importance for the BSEC.

"This initiative spearheaded by China will enhance connectivity in every sense between Asia and Europe," Christides said. "As the most representative regional organization in the area, we aim to be involved in every aspect of these efforts, in the sense that we would like to be able to attract financial support for infrastructure projects that we are promoting in our member countries concerning transport, trade facilitation, etc."

He continued, "We are very much interested and involved in promoting tourism co-operation related to the Silk Road, which is one of the strongest brand names today and which is very attractive. We would very much like to be present, to take part and be involved in educational or – if you want – civilizational aspects of the Silk Road project, something that is being promoted by UNESCO and other similar international organizations. We have been to China, we have been talking to interlocutors and of course there is nothing that can be achieved within the framework of this project that will not pass through the BSEC territory, be it a railway or a road, or the optical fibers and tourism routes, and so on."