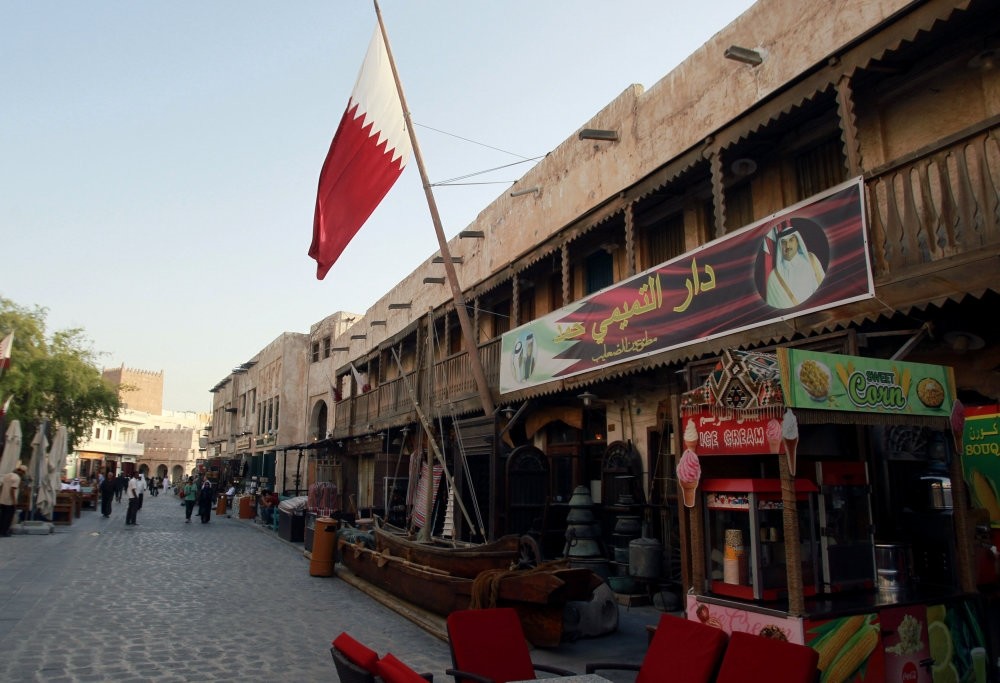 A shop in Doha with a picture of Qatar Emiri Sheikh Tamim al-Thani seen a day after the Qatar blockade by Gulf states, June 6.
by Mohammad Pervez Bilgrami Jun 15, 2017 12:00 am

A list containing the names of 59 Qatar-based or -funded individuals and 12 organizations labelled "terrorist" was released on Thursday in a joint statement by Saudi Arabia, the United Arab Emirates (UAE), Bahrain and Egypt. The new terrorist list includes the Muslim Brotherhood's spiritual leader and head of the International Union of Muslim Scholars (IUMS), Shiekh Yousuf al-Qaradawi and Abdullah bin Khalid, a former interior minister of Qatar.

The new terrorist list jointly issued by these countries is an addition to the 2015 terrorist list separately issued by Saudi Arabia and the UAE, listing the names of many European and American Muslim organizations known for their social and charitable work and interfaith dialogue programs. Similarly, Thursday's comical list also includes a government body that works under Qatar's Social Affairs Ministry that looks at all charities and monitors the collection and spending of these charities, most of which cooperate with international aid agencies, including the United States Agency for International Development (USAID) and U.K.-based Oxfam, in conflict zones such as Syria and Iraq.

The latest move in the Qatar fiasco surfaced just after U.S. President Donald Trump's visit to Saudi Arabia and a day after the declaration of the embargo on Qatar. Trump tweeted in favor of the Saudi move. The new, joint terrorist list was prepared by status quo forces with the clear motive to further punish Qatar after blockading the small Gulf Arab state from land, sea and air.

The Saudi and UAE-led block, which includes their coup protégé, President Abdel-Fattah el-Sissi of Egypt and a few other Gulf minions, has been fighting to maintain the status quo in the region since the beginning of the Arab Spring protests in many countries of the region. This counterrevolutionary bloc, which also includes the two other non-Gulf monarchies of Jordan and Morocco, which are not blocking Qatar, has been at odds with the Turkey and Qatar-led bloc, which includes the Muslim Brotherhood, Hamas and the Nahda Movement in Tunisia, which openly supported democratic change during and after the protest period in the region.

THE UAE'S ROLE IN DEVELOPMENTS

Many people both in and outside the region who hoped that after the death of King Abdullah and the accession of King Salman that the new Saudi administration might bring positive change to Saudi foreign policy are now frustrated and disillusioned. The new decrees clearly demonstrate that the UAE is still the key driver of Saudi foreign policy and nothing positive can be expected from the blunt and unthinking officials in Riyadh. The little value that the Saudis regained after enthroning King Salman is now fast vanishing.

Ironically, Sissi's Egypt, a notable signatory of this despicable decree, is not only supporting the ruthless regime of Basher Assad in Syria, but is also harming Saudi interests in Yemen and Libya. By gaining support from minions like the Maldives, Mauritius and Senegal, all difficult to locate on a world map, the effete Gulf despots do not realize that they are turning most of the Muslim world against them.

After silencing the Muslim Brotherhood in Egypt, subduing the Nahda Movement in Tunisia, the status quo bloc silently trimmed Muslim Brotherhood affiliates in Jordan and Morocco. They have also used every ploy to cripple Hamas in Gaza and Palestine. They actually had hoped that the coup attempt in Turkey would succeed on July 15, and that would have completed their counterrevolution in the Sunni Muslim world. If the coup attempt in Turkey had succeeded as they anticipated, Qatar would have already been forced to surrender and fall in line with their policies.

There is a long history of Qatari-Saudi disputes. Saudi Arabia is extremely annoyed with Qatar's independent foreign policy outside the Gulf Cooperation Council (GCC). Saudi detestation of Al-Jazeera first came to light in 2002, when Saudi Arabia withdrew its ambassador from Doha in reaction to controversial comments that were made on the Al-Jazeera satellite channel by Saudi dissidents critical of the Saudi royal family. Since 2011, Saudi Arabia and Qatar have been backing different sides in the unrest that gripped the Arab world, and tensions began to resurface. Al-Jazeera's coverage of the Arab Spring events is also a bone of contention between the two countries. Castigating Iran and blaming Qatar for discreetly cozying up to Iran is a ploy. With these decrees and the blame game they are playing, they are forcing Qatar to close down Al-Jazeera's news network and expel all Muslim Brotherhood figures from Qatar.

The aim of the joint embargo and later, the bizarre decree, is to force Qatar into complete submission. However, until now, Qatar has displayed defiance and refused to change its foreign policy. Turkey, Qatar's only longstanding ally in the region, came out openly in its support and expedited the troop deployment to its military base in Qatar. A few hundred Turkish troops are already stationed at the base from last year, and the speeding up of the scheduled deployment of extra troops sends a clear signal to the Gulf states not to think about the possible extreme step of a military invasion. This Turkish support for Qatar will compel the Gulf boycotters to solve their problems through dialogue.

Unlike previous standoffs between Qatar and Saudi Arabia, this time Turkey is playing a key role in solving the row through diplomacy. Shortly after the announcement of sanctions on Qatar, President Recep Tayyip Erdoğan spoke to the emir of Qatar, the Saudi king, and the emir of Kuwait who is shuttling between Doha and Riyadh, and other world leaders. The Iranian foreign minister visited Ankara, followed by the foreign minister of Bahrain. So Ankara is playing a vital role in solving this crisis, and that is definitely annoying some Gulf rulers and their Western masters.

With this new round of diplomatic fallout, the Saudis are wittingly or unwittingly providing space to Iran to directly indulge in the affairs of the GCC. Despite the magnitude of the calamity, Qatar has shown the utmost restraint and is avoiding further escalation. Qatar has some retaliatory cards in its procession, as 40 percent of the UAE's electricity is generated from natural gas from Qatar. Qatar would also not want to be seen as an Iranian launch pad in the Gulf. Saudi Arabia and the GCC's acts will only raise the viability of the very existence of the GCC as a unified bloc. Since they could not muster support from any significant country for their blockade of Qatar, now is the time for them to find an honorable exit strategy.

The decrepit Gulf rulers and their Arab and Muslim protégées must realize that they will not be able to carry on with the status quo for long and it will have to fall apart sooner or later. We are already witnessing the U.S.-backed and -installed governing systems gradually collapsing in Afghanistan, Pakistan, Iraq and Egypt. The sooner good sense and cool minds are allowed to prevail in GCC capitals, the better it will be for the entire region. Their ridiculous despotism is getting more comical with their latest thoughtless and malicious acts, and it must end for the sake of stability in the region.