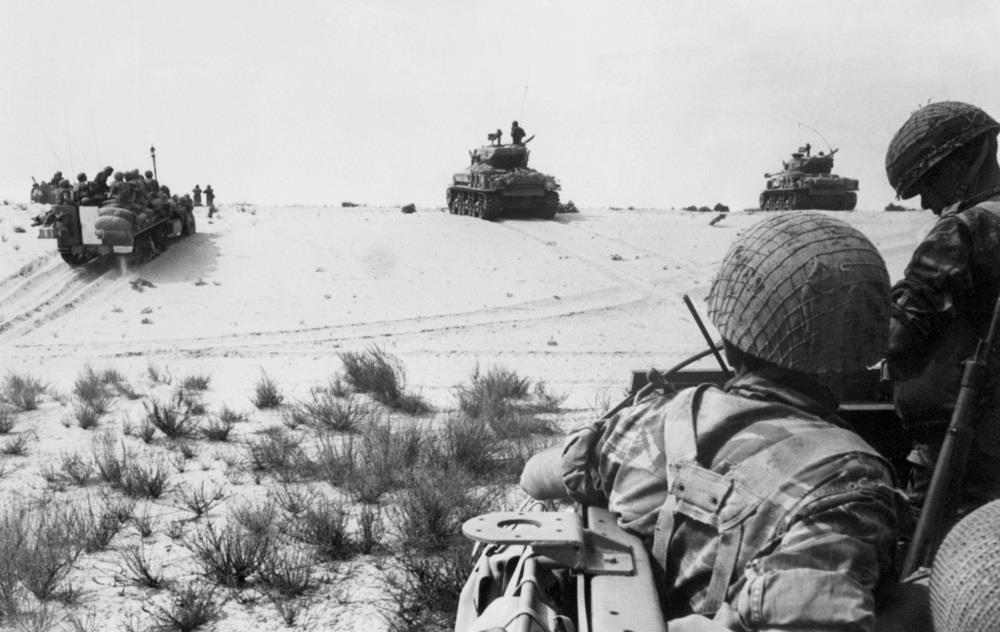 This file photo taken on June 5, 1967 during the beginning of Six-Day War or the third of the Arab-Israeli wars, shows Israeli armed forces in action in the Sinai Desert during clashes with Egyptian forces.
by Eren Egehan Bağış Jun 20, 2017 12:00 am

50 years ago this month, the world witnessed a war between Arab and Israeli forces, called the Six-Day War, when Israel tripled its territory and Arab nations failed to unite

Fifty years ago, the newly minted state of Israel launched an attack on two fronts, simultaneously crippling the air capabilities of Egypt to its south and Syria to its north. What ensued was six days of Arab armies being utterly disgraced and Israel gaining control over Egypt's Gaza Strip and the Sinai Peninsula, Syria's Golan Heights and Jordan's West Bank. This led to Israel tripling its total territory and foregoing the U.N. Partition Plan through an unprecedentedly belligerent land grab.It is only Arab historiography, however, that would even suggest that this was a sporadic and spontaneous show of Israeli belligerence. Rather, Israeli and even mainstream historiographies strongly contend that this attack was triggered by a perceived threat toward Israelis from the Arab nations due to their increasingly belligerent brinkmanship and competition to secure superiority over the Arab world, fighting for their individual interests as opposed to the collective protection from Israel.

The reason behind Israel's victory, despite being greatly outnumbered by the collective military power of the surrounding Arab countries, was their unity and their dedication for a single cause: securing a Zionist homeland. Israel was, by all accounts, fighting for its very survival. This is in sharp juxtaposition to the Arab mentality, as individual Arab states that supposedly were striving to protect the Palestinian people, masses of whom were refugees due to communal conflict since 1948, wanted to secure their own interests.

WHAT DOES THIS WAR MEAN?

Inter-Arab competition is what is said to have caused the Six-Day War, as increasing belligerence made Israel, which had only just secured its borders, feel at risk from enemies that surrounded it on all sides. Egyptian President Gamal Abdel Nasser's unyielding and selfish desire to crown himself as the hegemon of pan-Arabism is undoubtedly evidence of this. Nasser chose to involve himself in Yemen in 1962 to put one over, for lack of a better term, on the Saudis, as opposed to addressing the threat to the Palestinians he claimed to stand so resiliently by in his establishment of the Palestinian Liberation Organization (PLO) in 1964.

British historian Malcolm Yapp argued that the 1967 war marked the beginning of superpowers' unfettered interest in the region, as Israel's swift victory made it seem a dependable ally to the U.S. However, it was Nasser's attempts to seize aid from the Soviet Union that led to the War of Attrition along the Suez Canal that lasted from the end of the Six-Day War to 1970. There was no feasible intent other than to cause sufficient instability to attract Soviet interest with which Nasser would have pursued this strategy. And this is yet another example of unilateral Arab action that only forced Israel into an increasingly defensive position and into further subjugating Palestinians under occupation due to the perceived Arab threat.

The Khartoum Summit, during which the famous "three nos" of: no negotiation, no peace, no recognition were proclaimed, marked the newborn Arab attitude to the conflict – a sense of unconditional and perpetual belligerence and a sharp u-turn on Nasser's initial decision to reject armed struggle. Israel, too, had only followed a course of self-interest that enraged Arab attitudes by deliberately misinterpreting, in light of their own desires, the clause of U.N. Security Council Resolution 242 on the "withdrawal from the territories occupied."

Arab leaders' unyielding attitude and their one-upmanship was reinvigorated when Egypt, under President Anwar Sadat, attempted to make peace with Israel after the 1973 Yom Kippur War. Both Egypt and Israel had made mutual concessions in the 1975 Sinai II agreement and were both willing to continue the unwinding of tensions at Camp David in 1978. The other Arab states, however, did not welcome the potential for peace and prosperity.

The response from the Arab world was one that could only be described as an attempt to pursue further instability for personal gain driven by a sense of bitterness masked in glorified self-righteousness. The Arab League moved its headquarters from Cairo and the entire Arab region boycotted Egyptian oil. As opposed to making mutual concessions with Israel, the greater Arab world decided to pursue perpetual conflict and the facilitation of further bloodshed.

This was reflected in Israel with the emergence of groups such as Eretz Israel and Gush Emunim, and the later assassination of Israeli Prime Minister Yitzhak Rabin, not by a Palestinian extremist, but by a Jewish ultranationalist terrorist, in response to the 1995 Oslo Peace Accords and the lifting of the ban on the PLO to facilitate peaceful negotiations. This bears striking resemblance to the assassination of Sadat in 1981 by a member of the al-Jihad extremist group as a direct result of his peace attempts. The assassination of Rabin, triggered due to peace attempts, only furthered the unattainability of peace because of the response among the Israeli people, electing the far-right Likud Party in 1996 under Benjamin Netanyahu – the same Likud that was founded by Menachem Begin, a former commander of Irgun, the militant group behind the 1948 massacre in the village of Deir Yassin that killed 107 innocent civilians.

Looking to the present, the issue is brinkmanship that constantly foregoes the brink on both sides of the negotiating/fighting table because Arab factions, as well as Israel, still seem convinced that this is a dispute that can be settled through the use of force and/or other illegitimate means such as settlement building. The universally acknowledged necessity for peace, which is clearly required here because of splintering factions, in such conflicts is, unfortunately, not brought on by the recognition of mutual interest, but rather, more conflict. Yes, only when both sides are at a mutually hurting stalemate do both sides acknowledge that peace is the only way to save their own skins, as state actors almost always operate on realist principles and rarely have genuine concern for the greater good.

U.S. President Donald Trump now holds a potent bargaining chip, as the election of new leaders typically seems to yield new opportunities due to the lack of political baggage attached to a newly elected leader. This ability for Trump to use to mediate for a positive peace, being trusted by both sides, however, is fading away. As Trump has already relinquished his legitimacy as a mediator by starting his trip to Israel with a highly publicized visit to the Western Wall, and provided the previous paragraph, the prospects of positive peace, as opposed to the simple cessation of violence, with regard to the Palestinian question, seem to be in danger.