The missing piece of the puzzle: Afrin 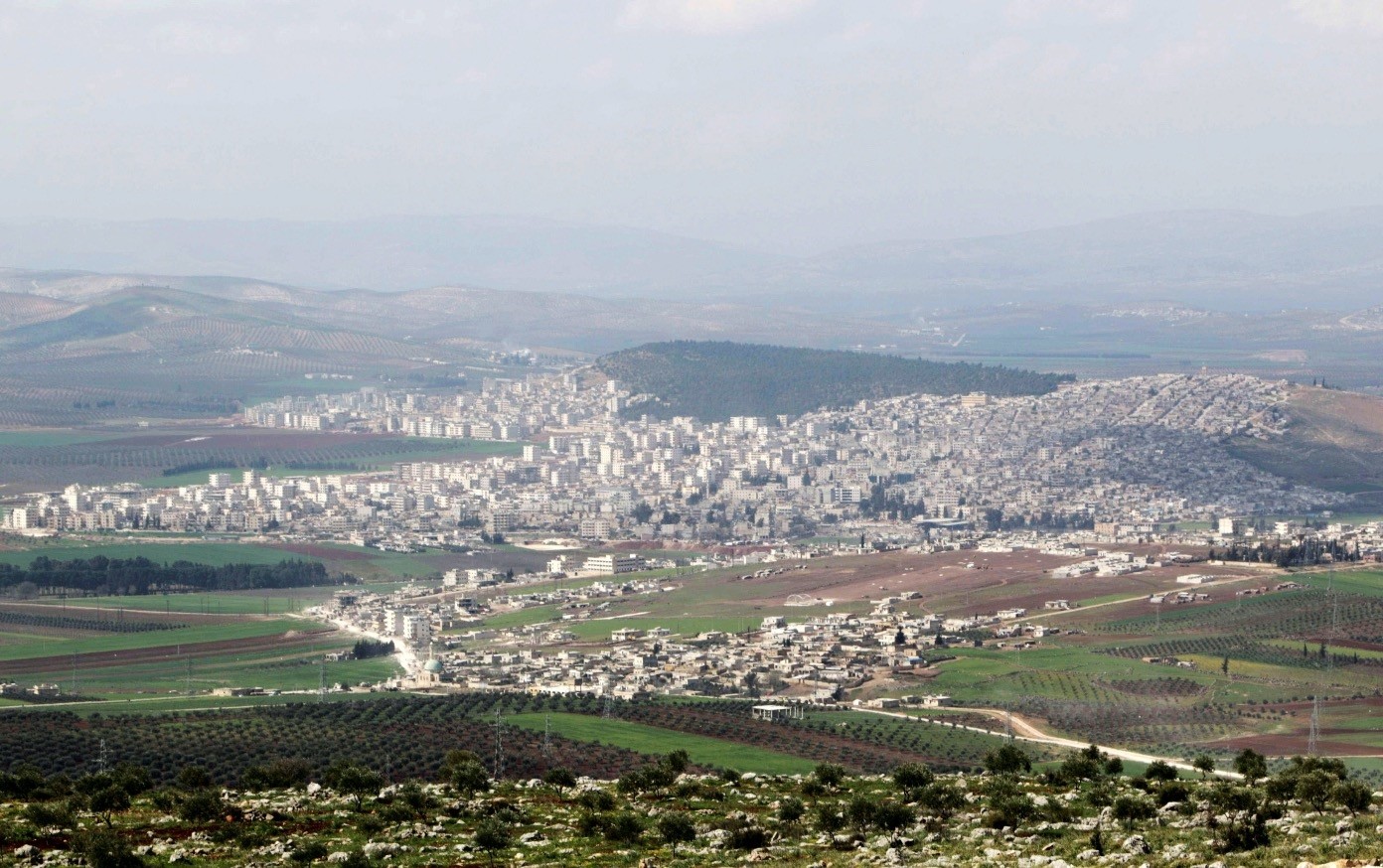 A general view shows the Syrian city of Afrin, near the Turkish border, where the outlawed PKK's Syrian branches, the YPG and PYD, have been recently stationed to continue their terrorist attacks against the Turkish national security, March 18, 2015.
by Bora Bayraktar Jul 10, 2017 12:00 am

The Syrian theater has turned into a puzzle of sorts. Each day, TV stations, newspapers and news sites post color maps showing who controls what in Syria. These maps show the areas controlled by the Bashar Assad regime, the moderate opposition and Daesh in different colors. Analyses and predictions about political and military situation based on the maps follow each other.

When looking at these maps, two big pieces of opposition-controlled territory in northwestern Syria stand out: Idlib and the Jarablus-Azaz-al-Bab line. In the middle of these two opposition-held areas of influence, located south of the Turkish border along Hatay and Kilis provinces and extending to Karkamış, lies Afrin.

Shown in a separate color, Afrin simply stands out as the missing piece of the puzzle in Turkey's security conundrum regarding the Syrian opposition's struggle to check the regime. And it seems that nowadays both Turkey and the Syrian opposition have decided to fit that missing piece into its place. But several conditions must be met for this to occur. For Turkey, clearing Afrin of the Democratic Union Party (PYD), which it regards as the Syrian wing of the PKK terrorist organization, depends more on a diplomatic solution and, in particular, an agreement with Moscow than military challenges.

A possible operation in Afrin would be the final thrust of Operation Euphrates Shield, which was launched by Turkey on Aug. 24, 2016, to thwart a project designed to create a PYD corridor along its southern border that would physically cut off Turkey from the Arab world. Located in the middle of a triangle formed by Hatay, Gaziantep and Kilis, Afrin separates Idlib from the Jarablus-Azaz-al-Bab line, which was secured through Operation Euphrates Shield.

Afrin has become a base for the terrorist group PYD to send militants and suicide bombers into Turkey and to train its recruits. The continuation of the PKK/People's Protection Units (YPG) presence and activities there represents an ongoing security threat for Turkey. With five suicide bombers caught in Hatay near the Syrian border only 10 days ago and eight terrorists arrested in Gaziantep with explosives, this clearly demonstrate what the group can do.

For Turkey, which was shaken by repeated attacks of the said group in Ankara and Istanbul in 2016, this is a problem that needs to be solved.

Clearing Afrin of the PYD and barring people there from providing support to the group would mean eliminating a terror base and normalizing the area. Thus, Turkey would secure an approximately 120 kilometer borderline extending from Reyhanlı to Kilis. Together with the borderline extending to Karkamış, which was cleared of Daesh through Operation Euphrates Shield, a nearly 240-km line along the border would be cleared of terrorist groups.

This is of utmost importance for the security of Turkey, for thwarting the operational capability of the PKK/PYD and inhibiting the motivations of terrorists. Preventing Afrin from being used as a base for military training and propaganda activities and the locals from serving as recruitment and supply source can be cited among other expectations from Turkey's possible operation in Afrin.

The Afrin issue has cross-border aspects as well. Foremost among them is the formation of an atmosphere of peace and stability along the Euphrates Shield line. Azaz, which is located near the Kilis border, is frequently bombed by the YPG. Free Syrian Army (FSA) positions around Azaz are being harried. That conflict environment on the borderline discourages Syrian refugees from returning to their homes and hinders their return. Suppressing the activities of the PKK/PYD in Afrin is crucial for Turkey, which wants to establish a safe zone there. There arises a need for securing not only points of contact, but also the entire Afrin province and stopping it from being a safe haven for the terrorist group. In this sense, the success of a possible Afrin operation may relieve Turkey and allow it to focus its attention east of the Euphrates.

From the perspective of long-term regional strategies, taking control of Afrin would certainly make a great contribution to Turkey's policies. Turkish Armed Forces (TSK), which started the decline of Daesh first by successfully carrying out Operation Euphrates Shield and which imparted confidence to its friends and struck terror on its enemies by capturing the allegedly impregnable al-Bab, would further strengthen its deterrence.

Secondly, as mentioned above, that would mean the total collapse of the project to establish a PYD corridor extending from the Iraqi border to the Mediterranean coast, which was kept on the agenda throughout 2015 and 2016. Facing efforts to confine it within its borders geopolitically, Turkey would thus break the siege. That, in turn, would enable Operation Euphrates Shield to precisely reach its objectives. As a result, Turkey will maintain its land connection with the Arab world and its active role in Syria. When stability is restored one day in Syria, interaction and commerce between Gaziantep and Aleppo will begin anew. Turkey will not be cut off from energy transit corridors.

The Afrin issue is also important with respect to the reshaping of the balance of power within Syria, the course of negotiations held in Geneva and Astana and to efforts to form a new government in Syria.

Linking the Jarablus-Azaz-al-Bab line with Idlib through the capture of Afrin would mean ensuring the territorial integrity of these three regions and establishing logistic lines. Again, normalization and demilitarization of everyday life and the formation of a political bloc there would also enhance the bargaining power of the Syrian opposition. That would strengthen their hand against the Assad regime. And Turkey will have a stronger hand in negotiations with Russia and Iran after acquiring greater self-confidence. This, in turn, would perhaps end the seven-year conflict in Syria and help to bring about a political solution. Turkey, Russia and Iran, the three guarantors, would be able to discuss a meaningful political solution.

Restoring peace and stability in the northwest would also allow Russia and Iran to direct their attention to the Iraqi border, to central Syria, to the east of the country and the Iraqi and Jordanian borders. Russia and the regime, which launched a rapid operation in the summer months with this objective, would thus have greater maneuvering room. As Turkey establishes a buffer zone on its southern border, Damascus and Moscow would be able to stem the advance of the U.S.-backed and PYD-dominated Syrian Democratic Forces (SDF) further into the south. So, they would secure the Iraqi and Jordanian borders. Since that would also serve the interests of Iran, which aims to keep the Tehran-Baghdad-Damascus-Beirut line open, from a diplomatic perspective the likelihood of an operation in Afrin exists.

How is the timing?

The downing of a regime warplane south of Tabqa on June 18 by a U.S. fighter jet to protect the PYD/YPG has forced Moscow to reassess its relations with the PYD. It seems that Russians will not trouble Turkey regarding Afrin to make the PYD pay for its increasing collaboration with the U.S. To some extent, Turkey taking control of the region would relieve Russia as well. It would add a new burden on the U.S., perhaps driving a wedge between it and the PYD.

One doesn't need to be an expert to predict that the U.S. administration, which has portrayed the PYD as a savior in Raqqa and its militants as "the most effective ground force against Daesh," will not be happy with a possible operation in Afrin and hence try to prevent it. But the course of the Syrian conflict indicates that it will be very difficult for the PYD to hold Afrin from now on.

The operation's chance of success

Still, the operation's chance of success depends rather on the continuation of Russian-Turkish agreement and setting relevant targets than the attitude of the U.S. It seems that the primary target in the Afrin operation will be the town of Tal Rifat. Nearly eight months ago, it was reported that three-pronged lines of defense with 30 kilometers of trenches and barriers were built around the town. Under normal conditions, the operation would begin first with Turkish Fırtına howitzers and tanks softening targets there and then clearing the way for ground forces through aerial bombardment. Controlling Highway 214, which passes west of Tal Rifat and runs through Aleppo to the north, turning from Azaz to Afrin, would completely cut the PYD/YPG's logistic line. Turkish troops and the FSA taking control of the highway linking the town of Deir el Jamal to the Minaq military airbase seems to be the minimum target of the operation.

If this is done, seizing the town center of Afrin and nearby settlements can be achieved over an extended period of time just like in the al-Bab operation. The TSK has extensive experience due to both its counterterrorism operations at home and its successful urban warfare performance in Dabiq and al-Bab. The most important issue here is to win the hearts and minds of local people and distinguish them from terrorists. That would be the most difficult and critical part of the operation.

Keeping the expectations of the public about a possible operation in Afrin within reason, not tying it to a schedule and combatting the propaganda of sympathizers of the terrorist group on social media come to the fore as the points that require the most attention. If Moscow and Ankara reach a definitive agreement on Afrin and stick to it until its objectives are attained, it will be easy for the Turkish army and its ally FSA to succeed.