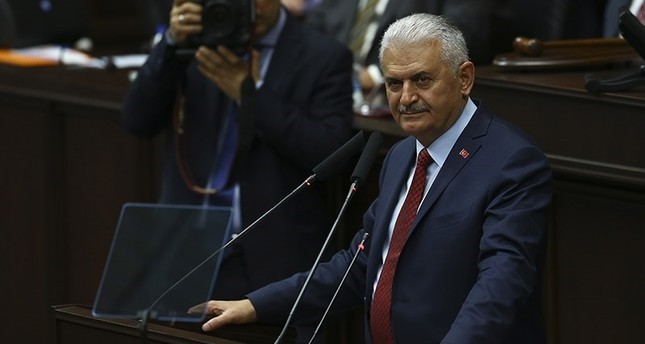 It has been a year since we thwarted the bloodiest terrorist attack in the history of the Republic of Turkey. Turkey has proven its resilience, ability to recover and take strength in the course of the last year. It is essential to make an evaluation of the past year and look forward.

First of all, we should remember what we have been through. What happened that night was an attack on the Turkish state by traitors who infiltrated the Turkish military, who are loyal to a deranged man who sees himself as the "imam of the universe." We were confronted with murderers who bombed their own national Parliament, destroyed the headquarters of police special forces that fight at the forefront against terrorist organizations, drove tanks over unarmed civilians, and fired from fighter jets and attack helicopters. We have never before been through such brutality in our history. This terrorist network killed 250 of our citizens and left more than 2,000 injured.

Going back, two sources of pride emerged from this bitter experience. The first one is the courage and determination of the Turkish people. Our citizens from all backgrounds and political views took to the streets against the putschists. Our television channels continued broadcasting despite the threats and raids by coup plotters. The Turkish nation became one.

Second, the Turkish nation showed the entire world that it defended democracy and will continue to do so. My people demonstrated that only the governments taking office through democratic processes and the will of the people would rule Turkey, not the armed groups. The strongest legitimacy is the democratic one. We passed this tough democracy test as a country.

But the question that my grandchild asked me with all her naivety that night will never fade away from my mind or anyone else's: "Grandpa, aren't these our soldiers?" Indeed, what kind of mindset would drive a person to attack his own people, institutions, symbols and leaders in such a brutal manner?

The answer underlies the nature of the treacherous network we are facing. That night, we were confronted with a crime network, blindly following the orders of ringleader Fetullah Gülen via a professor of theology. We are talking about a treacherous gang that failed to grasp the notion of the glorious millennial history of Turkish soldiers, saluting the manager of a company owned by the Gülenist Terror Group (FETÖ) and the ostensible owner of a school operated by the same organization, at the military base they used as their headquarters.

As a matter of fact, my government had actually unmasked Fetullah Gülen and taken action accordingly. We had already been exerting efforts to unveil the existence of this structure inside the state and had made significant progress to this end. However, the July 15 coup attempt bitterly revealed that the threat we are facing is beyond our estimation, that it is much deeper and more vital. The magnitude of the plot masterminded by Fetullah Gülen for the past 40 years to seize control of the Turkish state was exposed. FETÖ members, following the orders of Fetullah Gülen, had acted unnoticed inside the capillaries of the system and reached almost all power centers like an infection caused by a virus that gradually takes over the vital organs of a body. Comprehensive administrative, criminal and legal investigations have been conducted throughout the year since July 15, 2016. Extensive evidence has been reached on this structure that masterminded and implemented the coup attempt.

The evidence has demonstrated that we are facing a heretical, esoteric belief system built by Fetullah Gülen. The schools and dorms of the organization operated as brainwashing and recruitment centers. Members of the organization indoctrinated in these intuitions and loyal to their mastermind, whom they believe to be "the Messiah," were enabled to infiltrate the state apparatus. This way, the followers, ready to resort to all sorts of illegal and immoral acts without any questioning, were promoted to key positions. These people hatched plots such as cheating in public service entrance tests, illegal wiretappings, blackmailing and sham trials. The organization had been financed through so-called charities and foundations. Billions of dollars worth of money transactions have been laundered via large companies and banks. The organization's media branch functioned as a propaganda tool. Is it conceivable for an "education movement" to operate in cell structures, recognize members with code names, develop encrypted applications to communicate among themselves, teach its members techniques of counter-intelligence and tactics to mask their affiliation? This new generation of terrorist organization has resorted to every possible method to eliminate those who are not with them and tried to control not only the political power but also the state of the Republic of Turkey in line with their own heretical ambitions. It is this heretical and dangerous ambition the Turkish nation thwarted on July 15.

I can say that we have destroyed the backbone of the organization in Turkey with the measures we have taken. However, the threat is not limited to Turkey. The organization has similar structures in many countries. Currently, they continue to plant treacherous seeds in other states. This time, they are more actively seeking global economic and political influence for their survival. I hereby would like to alert our friends once again.

The Turkish nation proved to the world that democracy is not a cheap victory but is precious enough to die for its sake. Our primary duty is to take necessary measures to prevent it from happening again. We are making efforts to manage this challenging process within the constitutional order. Eventually, Turkish democracy was targeted and it won. So our aim and endeavors will be to take the necessary steps in time to crown our democracy.