Remembering Srebrenica and the Bosnian War 22 years on 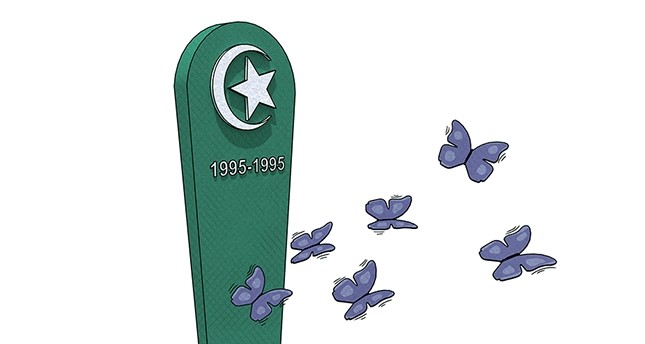 If no decisive action is taken by the world on what now seems to be a peaceful country, one can only expect more ethnic strife and the potential of another devastating war in the future

The Bosnian War (1992-95) was effectively a conflict over politically engineered ethnic differences. The only real difference between ethnic Serbs and ethnic Bosniaks was their names. There were no definitive racial differences, and religion was negligible as it was very loosely followed by the Muslim Bosniaks and the Orthodox Christian Serbs. At a simple glance, ethnic tensions seemed as calm as any other peaceful country, and the possibility of an ethnically fuelled conflict was nowhere near the table.

The catalyst for the ignition of essentially non-existent ethnic differences is partially found in the referendum of 1991. The Bosniaks of the previously united Yugoslavia voted in favor of independence, to form their own sovereign state. This, many argue, fueled the already ongoing reinvigoration of age-old ethno-religious disputes by Serb leaders who felt a threat to their own power and ethnic identity. This was the trigger for invoking religion into the matter, as the idea of God, the absolute, would solidify now competing identities that seemed to many to have sprung out of nothing. This was the point at which tension would morph into a religiously fueled conflict.

On July 11, 1995, Serb forces under General Ratko Mladic took control of the town of Srebrenica in Bosnia as they proceeded to commit the – widely unacknowledged – second biggest war crime on European soil since the Holocaust. In this one gut-wrenching instance of ethnic cleansing, of which there were many during the Bosnian War, Serb forces killed over 8,000 Bosniak men in one of the bloodiest weeks in modern history. The men were bussed from an abandoned battery factory in the village of Potocari where the residents of Srebrenica had decided to seek protection under Dutch peacekeepers.

GETTING REVENGE ON TURKS

History was also strongly invoked, used as the justification for the genocide at Srebrenica. Mladic, the mastermind of the unthinkable atrocity, was famously captured on camera saying that he "must get revenge on the Turks." The historical grudge finds its roots in the early 19th century when a group of Ottoman janissaries who had turned against the sultan feared that the Serbs would be used against them and resorted to killing multiple Serb chiefs. This single event, which had taken place nearly two centuries before, was sufficient to justify the inhuman act.

This is what is so concerning about the current state of Bosnia's so-called peace. If such a minor act from two centuries ago can be used to justify an act like Srebrenica and other ethnic cleansings, just imagine the atrocities that Srebrenica could one day justify in the eyes of some.

To settle the conflict, the administration of then U.S. President Bill Clinton and other third parties under renowned diplomat Richard Holbrooke engineered an agreement. The accords stated that Bosnia would be split into the Federation of Bosnia-Herzegovina as the homeland of Bosniaks, and the Republica Srpska for Serbs and Croats. What is more, the new federal system as brokered in Dayton, Ohio, predicated that citizens must register as either Serb, Bosniak or Croat to vote in elections and that there would be three presidents, one for each ethnic group. These arrangements were of course suitable and necessary for a time when wounds were fresh, but it is not hard for one to understand how permanently separating ethnic groups would, in the words of renowned peace builder Desmond Tutu, "let the wounds fester." Highlighting and emphasizing the very differences that allowed such a costly war to take place surely is not sufficient to address the actual roots of the original conflict and can only lay the foundations for another one.

THE BIGGEST FAILURE IN SREBRENICA

At the root of Srebrenica is what many people believe to be the biggest failure of the United Nations Security Council (UNSC), whose very mandate is to ensure global peace and security. With passing of UNSC Resolution 819 in 1993, Srebrenica was among the first group of sites to be marked as "safe areas" in an effort to avert potential genocides.

From the very outset there was a lack of will from the United Nations and countries to actually protect the people of Srebrenica. Despite the fact that two permanent members of the UNSC had known that other ethnic cleansings were taking place, no decisive effort to prevent the genocide at Srebrenica was ever enacted. Clinton was far too concerned with his re-election, and there was no real interest for control over Bosnia.

This is of course unfortunately typical of the U.N., an organization that claims to protect those who cannot protect themselves, while in reality the U.N. has no real executive body and is made up of countries that undoubtedly have realist interests in mind. All this does is give the world a dangerously false sense of security vis-à-vis the Security Council, which has no real teeth.

The town was defended by only 300 lightly armed Dutch U.N. peacekeepers that were mandated by a Security Council resolution that is international law to protect the civilian population of the town. Assigning a small army of lightly armed peacekeepers to a town under the well documented Serb threat is a clear indication of a lack of will to uphold the purpose for which the U.N. was created after the most devastating war in human history. There are many reports of the peacekeepers failing to uphold the mandate by abandoning their posts. The commander even agreed eventually to release the would-be victims under coercion from Mladic, and during the assault, the global community decided not to respond with airstrikes for the simplistic reason that the mandate was not to engage in the conflict, but to protect civilians.

If anything, the paralysis of the international community as humanity's greatest mistakes were repeated is a sign of how half-hearted the global community is, and how the idea of ever closer union and interdependence are theoretically robust in a lecture hall, but feeble when put to the test. Putting the duty of mutual protection into the hands of those who cannot be accountable to those whom they claim to protect simply undermines such an unprecedentedly weighty responsibility. This highlights the key issue with the current global order; the lives of those who cannot defend themselves are (supposedly) protected by individuals who have absolutely no accountability or real incentive to do so and are often distracted from what should be their most important duties of all.

Due to the lack of political space and the preoccupation with the war on terror, the Dayton Accords were never renewed as they were intended to be, and ethnic division is still politicized and exaggerated in Bosnia to this day. The trials at the International Criminal Tribunal for the former Yugoslavia being dragged out to this day also aggravates trauma, and this is not conducive to genuine, positive peace, which is more than just the cessation of physical violence. If no decisive action is taken by the world on what now seems to be a peaceful country, one can only expect more ethnic strife and potentiality of another devastating war in the future.