'I revolt, therefore I am' in the personality of Muhammad Ali 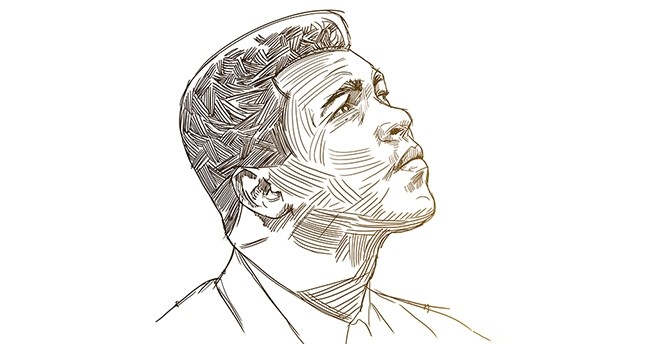 When Ali refused to serve in the military in the Vietnam War, he proved man's ability to revolt against injustice, in other words, to choose what one's conscience says to do rather than the social and political order does

The statements of "I think, therefore I am," "I feel, therefore I am" and "I revolt, therefore I am" by Descartes, Gide and Camus, respectively, show their efforts to define man. Instead of Gide and Camus's assertions, Descartes statement is the one that has become most renowned due to the attribution it makes to thinking in explaining man's uniqueness. However, according to the late Iranian sociologist, Ali Shariati, Camus's assertion: "I revolt, therefore I am," is the most peculiar to man. Pondering Shariati's view simply at face value of Camus's statement does bring up questions about the prudence of such a view. However, when read from his thoughts on the three distinctive qualities that man has, which he describes as self-consciousness, making a choice and creating, Camus's statement gains more meaning and context.

To Shariati, in man's ability to revolt lies his ability to make a choice, i.e., his ability to exert his consciousness. Explaining the relevance of revolt, Shariati stresses that "it is only man who can revolt, contrary to the demands of his nature." As such, the only being that can choose is man. He goes further by saying that "man's disobedience is indicative of the fact that he can choose."

Therefore, man's ability to choose is on its own a significant phenomenon that requires man to reflect on its whys, hows and ends. On the other hand, there are a number of factors that have impacted man's ability to choose throughout the history of human existence. In the case of Adam and Eve, the main issue was self. To Shariati, the self remains the worst of all prisons that gets in the way of man getting liberated. He explains that although man has gained his ability to free himself from the prisons of nature, history and society, his struggle with the self has become ever more complex. He explains this complexity in that prison and prisoner have merged and that is why he says that getting rid of the fourth prison is the hardest of all. He advises that although man has benefited from science to break out from the prisons of history, nature and society, he says "man cannot extricate himself from the prison of his self by seeking help from science, since the latter is the possession of the prisoner. This is why the 'self' does not feel that it has buried a free 'I' in it."Throughout history there have been people who have used their ability to revolt in that to choose what their conscience tells them to do rather than what the social and political order does. The late legend Muhammad Ali is one of these people who remains an example for those who would like see the power of man simply through his ability to revolt, in other words, to choose. In 1967, he refused to serve in the Vietnam War, and as a result, he was stripped of his heavyweight title. However, for him, his conscience came before his title, fame or other consequences he might experience due to making a conscious choice. He later explained his position:

"My conscience won't let me go shoot my brother, or some darker people, or some poor hungry people in the mud for big powerful America. And shoot them for what? They never called me nigger, they never lynched me, they didn't put no dogs on me, they didn't rob me of my nationality, rape and kill my mother and father. Shoot them for what? How am I going to shoot them? Poor little black people, little babies, and children, women. How can I shoot them poor people? Just take me to jail."

Ali was eventually convicted for refusing to serve in Vietnam War, sentenced to five years in prison and banned from boxing for three years. However, the man who refused one injustice did not bow to another, and he appealed the decision and said the below on his refusal to serve in Vietnam:

"Why should they ask me to put on a uniform and go 10,000 miles from home and drop bombs and bullets on brown people in Vietnam while so-called negro people in Louisville are treated like dogs and denied simple human rights? No I'm not going 10,000 miles from home to help murder and burn another poor nation simply to continue the domination of white slave masters of the darker people the world over. This is the day when such evils must come to an end. I have been warned that to take such a stand would cost me millions of dollars. But I have said it once and I will say it again. The real enemy of my people is here. I will not disgrace my religion, my people or myself by becoming a tool to enslave those who are fighting for their own justice, freedom and equality. If I thought the war was going to bring freedom and equality to 22 million of my people they wouldn't have to draft me, I'd join tomorrow. I have nothing to lose by standing up for my beliefs. So I'll go to jail, so what? We've been in jail for 400 years."

In his final statement of why he was refusing to serve in the military in the Vietnam War, Ali not only refuted the illegitimacy of the Vietnam War, but the violence that certain groups such as Daesh, Boko Haram are currently claiming to be carrying out in Islam's name.

All this signifies how both powerful and weak man is depending on his ability to revolt or choose correctly. And in order for man to have the faculty to make the right choices there is a need to be liberated from all the phenomena that imprison man. As Shariat mentioned, science cannot help man liberate himself from the prison of self because science itself is the prisoner of self, which is imprisoned. Through feeding man's arrogance, science has fortified man's imprisonment in the self. This all leads to the notion that there is a need for a source that can equip man to rebel against the self, control the self and guide the self. Achieving this could only happen through the liberation from the prison of the self or from the enhanced belief around the absolute power and centrality of the self.

This requires a quest for the absolute truth, which seems to be largely ignored by modern man. The great 14th century Muslim scholar Ibn Khaldun explains the cause for humans' ignorance of truth as the weakness of the human soul for worldly acceptance at the expense of truth. The number of people who prefer wealth and position over virtue or truth has always outnumbered those longing for virtue and truth, which is why the level of ignorance of those destitute has always been a significant issue for humanity. Ibn Khaldun summarizes this issue: "Human souls long for praise and people pay great attention to this world and the position that wealth offers. As a rule, they feel no desire for virtue and have no special interest in virtuous people." He goes on further that "if the soul is impartial in receiving information, it devotes to that information the share of critical investigation the information deserves, its truth and untruth thus becomes clear." Ibn Khaldun's emphasis on critical faculty, impartiality and the desire for virtue are probably some of the key components in achieving self-liberation, and these were the values that Ali paid attention to when he revolted.

Share on Facebook Share on Twitter
Previous in Op-Ed One year after the bloody coup attempt on July 15, all the concrete... Next in Op-Ed Although it is presented as a symbol of civilized urban life and modernity,...
DAILY SABAH RECOMMENDS