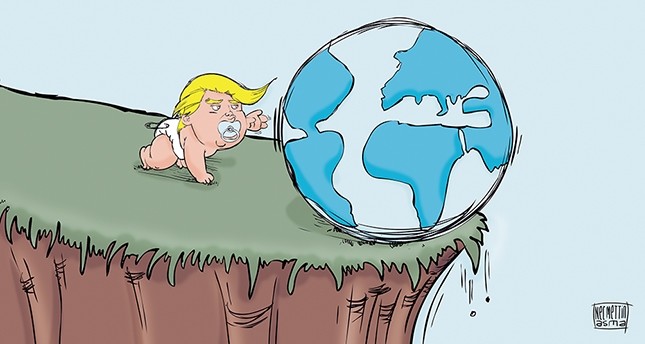 U.S. President Donald Trump has completed his first six months in office. One of the unknowns of this unusual president is his foreign policy. Would it be more like a continuation of his predecessor Barack Obama's foreign policy or would there be a significant departure from it? We have had a chance to listen to the Trump administration's foreign policy rhetoric and see its actual foreign policy in action now.

Before his inauguration in January, Trump wanted to bring a change, and many Americans voted for the promise of that change. However, both in domestic politics and in foreign policy, the changes he brought have been quite limited. Trump is still working to put his men in key bureaucratic positions. In the meantime, he is facing strong criticism related to the Russia probe about his key aids' contacts with Russian officials during the election campaign and to his firing of the former FBI director. He has not been able to get favorable coverage from major media outlets. He wanted to quickly change a few things, such as U.S. immigration policy, but has been constrained by court decisions. He has also been facing congressional opposition in other policy areas that he wants to change, such as Obamacare. The president's views are at odds with not only Democrats, but also many Republicans. Thus, he is politically constrained in bringing the changes he wants.

Regarding foreign policy, he seemed to be bringing a more friendly and collaborative approach to U.S.-Russia relations. Today, however, he is in the opposite place of where he wanted to be. Even though his latest meeting with Russian President Vladimir Putin at the G20 Summit in Hamburg was significant, the U.S. is in fact continuing Obama's sanction policies on Russia, fortification of U.S. and NATO troops and deployment of U.S. fighter jets in Eastern Europe along the Russian border. Currently, Congress is imposing a new set of sanctions on Russia for meddling in the U.S. elections through the Trump campaign's links and for its aggression toward Ukraine. The president is being asked to approve the measures. Only in Syria is there intermittent cooperation between the U.S. and Russia, but tensions emerge from time to time.

Trump's anti-Muslim rhetoric, criticism of Saudi Arabia, denunciation of the nuclear deal with Iran, demand for oil money for the American provision of security in the Gulf and promise to move the U.S. Embassy from Tel Aviv to Jerusalem during his election campaign created an expectation of a significant change in U.S. foreign policy on the Middle East. In many ways, however, Trump's policies are a continuation of Obama's policies in the Middle East. The U.S. has long-term strategic plans that bring continuity to U.S. foreign policy from one administration to the other. There was a lot of continuity from President George W. Bush and Obama's administrations. There is considerable continuity in Trump's foreign policy and Obama's foreign policy as well. Despite Trump's rhetoric, the U.S. has not moved its embassy to Jerusalem. Trump himself seemed to back off from the U.S. policy of a two-state solution in Palestine, but his administration is still engaged in seeking a peace deal between Israel and Palestine. Nonetheless, Trump's strong pro-Israeli stance empowers Israel's one-sided actions toward Palestinians and prevents any possible peace deal in the near future.

U.S.-Saudi relations also show continuity. Despite his negative talk about Saudi Arabia during the election campaign, Trump's first foreign country visit was to Saudi Arabia. Thus, the U.S. and Saudi Arabia, along with Abdel-Fattah el-Sissi's Egypt and countries that follow the Saudis in the Gulf, reaffirmed their alliance. The U.S. still backs Saudi Arabia and its proxies in Yemen. In Afghanistan too, U.S. involvement continues with a higher level of military engagement.After the nuclear deal with Iran, U.S.-Iranian relations seemed to be softening during the Obama administration, similar to the softening of relations between the U.S. and Cuba. The Trump administration somewhat reversed this, with a declared intention of renegotiating a "better deal." But it is not clear to what extent the U.S. can change the nuclear deal, which is under the auspices of the U.N. Security Council. Saudi Arabia and the Trump administration have a common desire to push Iran back from the places where Iran is heavily involved in the Middle East, especially in Yemen, Syria, Lebanon via Hezbollah and Iraq. To what extent the U.S. can move against Iran while Russia and Iran collaborate is an open question. Also, a crisis with Iran as a result of reckless actions could endanger the security of the whole Gulf region. Is this desirable for any party? Obama's administration had a strategy of engaging and improving the relationship with Iran with an idea of giving a vision of where Iran can go. Trump has been expressing his skepticism of Obama's approach, but he lacks a sound policy alternative.

Americans are fatigued with U.S. involvement in the Middle East. During the election campaign, Trump also said that Middle Eastern countries should deal with their own extremism and with their own issues themselves, implying U.S. disengagement from the region. He also believes that the U.S. occupation of Iraq in 2003 was a terrible mistake. But at this time, the U.S. cannot leave Iraq or Syria without the current security situation improving. The U.S. cannot leave the Gulf either. Hence, its involvement in the Middle East continues, as well as the fight against Daesh.

The Trump administration has been continuing Obama's tactics in the fight against Daesh both in Iraq and Syria. Despite long-time U.S. ally Turkey's objections, the U.S. has continued to back the PKK's Syrian affiliate Democratic Union Party's (PYD) People's Protection Units (YPG) militia in Syria in the fight against Daesh. Thus, there has not been any significant departure in Trump's Syria policy either. There is somewhat stronger cooperation between Russia and the U.S. over the Syrian crisis. Currently, Daesh is on the run, but there is no apparent political strategy to deal with the situation after Daesh in Iraq and Syria. It seems that Trump's administration is unclear about what will happen after Daesh. However, without a political strategy, long-term stability will not come to these countries, as it did not come to Iraq since the U.S. occupation in 2003 due to lack of a sound political strategy.

Turning to Asia, which is a region that increasingly carries a larger role in U.S. foreign policy, there is continuity in Obama and Trump's policies as well. The U.S. alliance structure and its policies on China continue in Asia. Trump has been acting tougher against North Korea than Obama did, but the main approach to deal with the North Korean crisis remains the same. In the meantime, Trump, with his "America First" approach in the name of protecting American jobs, announced the U.S. withdrawal from the Paris Climate Agreement of 2015, pulled the U.S. out of the Trans-Pacific Partnership (TPP) that Obama signed and declared his intention to renegotiate U.S. trade agreements, namely NAFTA and the U.S. trade deal with South Korea. How all these fit into the U.S.'s global strategy seems to be a mystery. Trump's presidential and foreign policy style is unique, and there is no precedent to compare him to. Sometimes he acts like the reality show star he used to be. He seems to have some notions about what he wants to achieve, but we have yet to see a coherent foreign policy strategy.

It is clear that he is acting based on pragmatism rather than on strongly held principles. With his America First approach, he is doing what was expected of him by his supporters. He wants to be a winning president and continues to act like a businessman rather than a statesman. As a businessman, he wants to magnify his profits and limit his costs. As president, he is constantly trying to achieve a better bargaining position for America with various tactics. Sometimes he shows a big stick and acts combative, and sometimes he uses tensions from a crisis to get as much as he can. I think that this policy approach was exemplified with the latest massive weapons deal with Saudi Arabia and Qatar during the ongoing Qatar crisis. Trump wants to pass the cost of U.S. involvement in the Middle East to the region's oil-rich countries. He wants to turn a manageable crisis into an opportunity for the U.S. Through the crisis, he gains better bargaining power and shows his electorate that he is tough.

It is doubtful that Trump's foreign policy rhetoric and actions are part of well-informed and coherent policies. If he continues this foreign policy approach, we are likely to see more inflammatory, incoherent and rhetoric-driven polices. He also acts impulsively from time to time, as exemplified by his travel ban that was turned down by U.S. courts. Such policies could harm American leadership under Trump and make it harder to deal with global problems without effective leadership. His approach could benefit corporate America, as the military equipment deals with Saudi Arabia and Qatar benefit the producers, but it is not clear whether corporate gains would trickle down to the American people. Trump's policies are still being tested, and we will see their real outcomes in the coming months and years.

Share on Facebook Share on Twitter
Previous in Op-Ed The stories of the two significant and occupied places, the Moroccan... Next in Op-Ed Turkey could bring its Operation Euphrates Shield to a successful...
DAILY SABAH RECOMMENDS