The impending battle for Idlib and Turkey's Euphrates Sword 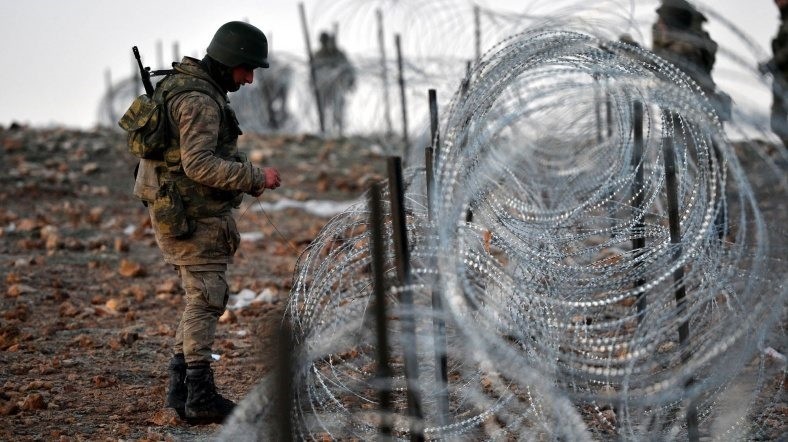 A Turkish soldier standing near wire fence as Operation Euphrates Shield, a counter-terror offensive starting on August 2016 by Turkish-backed Free Syrian Army to clear the Syrian towns from Daesh and PKK-affiliated terrorist groups, is continuing.
by Ahmed Al-Burai Aug 01, 2017 12:00 am

Turkey could bring its Operation Euphrates Shield to a successful conclusion, driving terrorists away from its borders to provide national security, but, the YPG danger is still ongoing, which means another counterterror offensive is required in the near future

It started after the tragic fall of Aleppo when the message to the revolutionists was either accept the coming abhorrent status quo or the spillover will be grim and Idlib will share the same fate as Aleppo.

The non-monolithic opposition groups were repositioned to Idlib province so that Bashar Assad and his backers could easily eliminate them. Strategically, neither Russia nor Assad could allow the displaced opposition to take a breath and gather their strength. Corralling the opposition into one area was a vicious tactic.

Those opposition groups are basically heterogeneous with opposing allegiances and their divergences outweigh their convergences. They range from groups such as the Free Syrian Army (FSA), which is backed by Turkey and Qatar, to the Salafist armed groups such as Hayaat Tahrir al-Sham, a new umbrella organization that includes Jabhat Fatah al-Sham (formerly Jabhat al-Nusra), and other strong movements like Ahrar al-Sham, which has been going through an internal conflict among its hawks and doves. Their internal fight ended with 16 local factions uniting and forming a new sub-faction called Jaish al-Ahrar under the leadership of Ahrar al-Sham's former chief, Hashim al-Sheikh.

Will these groups accept the agreements that have been brewing between international players? Do they have the leverage to challenge the inevitable scenarios of partition? And most importantly, are the regional and international players on the same page, or is every one singing their own tune?

To reinstate stability, a plan for de-escalation zones is being promoted as a successful strategy at the southern front. Assad's future, too, is still negotiable, but most probably will be part of the political process, mainly after French President Emmanuel Macron said that he saw no legitimate successor to Assad and France does not consider Assad's departure a prerequisite to embark on a political process to end the six-year conflict.

Recently, Washington has sent unequivocal messages to Assad, Russia, Iran and even to Ankara that U.S. President Donald Trump may not like to draw red lines, but he does not dither to make them effective.

Tensions have erupted between Moscow and Washington when the U.S. military downed a Syrian regime warplane. The Russian Defense Ministry called the downing of the plane "a cynical violation of the sovereignty of the Syrian Arab Republic" and "military aggression." And as a result, de-confliction channels, which have been set up to avoid conflict between U.S. and Russian forces in Syria, have been suspended. Moscow even threatened to target American aircraft west of the Euphrates.

Downing the regime aircraft came days after U.S. forces in southern Syria shot down an Iranian-made armed drone in the second such incident in 12 days.

Trump's latest attacks on Russia's regional allies of Iran and the Assad regime do not resemble his military strike on a regime airbase in response to the chemical weapons attack that killed dozens of civilians last April. It is the first time the U.S. has shot down a regime aircraft since it began fighting Daesh in the country in 2014.

The repetition of such incidents shakes Russia's image as a colossal power standing helpless to protect its regional allies. Trump's policy of flexing his military muscles could result in a collision between the two powers due to the reason that Trump does not see Russia as an equal partner in decision making on Syria.

Almost two weeks ago, President Recep Tayyip Erdoğan reiterated in a fiery statement: "I say to the international community that whatever price must be paid, we will never allow the establishment of a new state on our southern frontier in the north of Syria."

There are reports speaking about Turkey moving troops and weapons to the southern city of Kilis, which is very close to the Syrian city of Afrin controlled by the terrorist PKK-affiliated Democratic Union Party's (PYD) People's Protection Units (YPG) forces.

Is Turkey preparing for another counterterror operation against the YPG in the city? There are unconfirmed leaks in local media outlets that Russian forces have left the city of Afrin.

Erdoğan vehemently said that a "terrorist" statelet in the north of Syria is not just a national security threat, it is rather an existential threat to the integrity of his country and he will not hesitate to embark on another operation similar to Operation Euphrates Shield to impede such a hostile state to be created on his southern border.

Turkey has ended Operation Euphrates Shield, which it launched in Syria on Aug. 24, 2016. However, Prime Minister Binali Yıldırım suggested that there might be more cross-border campaigns to come.

In the Turkish media, there are talks about an imminent operation codenamed Euphrates Sword. The connotations of "sword" versus "shield" indicate that the pending Turkish operation in Syria will be offensive as opposed to defensive.

Such an operation cannot happen unless both Ankara and Moscow reach an agreement in which Ankara can act independently and freely in northern Syria, provided that it offers Moscow something valuable in return. Was there an agreement? And what will Ankara give up in return?

In Astana, there were talks that Kazakhstan and Kyrgyzstan were reportedly asked to send troops to monitor de-escalation zones in northern Syria. So, the plan is to enforce de-escalation on the northern front where Turkey and Russia would guarantee its sustainability.

The challenge for Russia is whether the different opposition groups in Idlib would manage to agree to the negotiated deal. The opposition groups have to either accept the de-escalation mandate or face an imminent battle similar to that in Aleppo.

Ankara is expected to use its leverage and convince the moderate opposition in Idlib to accept the conditions of de-escalation. However, Turkey does not have the power to pressure groups such as Hayat Tahrir al-Sham, which has recently taken over the whole city after a fierce fight with Ahrar al-Sham. Hayat Tahrir al-Sham is expected to scrap the entire plan, and that may lead to an unavoidable military confrontation.

In case a confrontation occurs, a similar scenario to Aleppo is inevitable. There will be hundreds of thousands of civilians evacuating the city, and their destination will be either Turkey or northern Syria. Either Afrin will be a shelter for the displaced or a base for Turkish troops in charge of guaranteeing de-escalation conditions.

Turkey's looming operation has a possibility to succeed depending on the maintenance of the Russian-Turkish agreement and setting pertinent objectives away from the tentative attitudes of Washington. However, whether the plan succeeds or fails, all roads lead to the partition of Syria simply because the success of a de-escalation plan literally means a de facto division of responsibility among the powers involved in which they would agree on which power is responsible for which part of the country.