US's grand strategy: Say one thing, do another 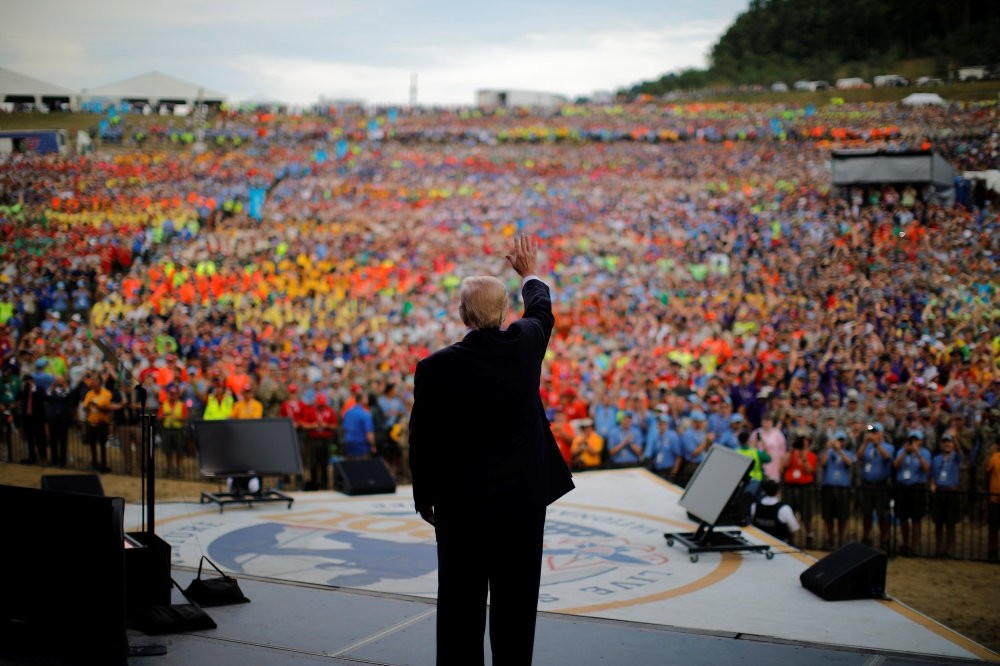 The inconsistent foreign policies of the Trump administration, which have been clearly observed in the Syrian civil war, Turkey's coup attempt and recently in the Gulf rift, reveal that the U.S. is no longer trustworthy

When Donald Trump was elected U.S. president to replace former President Barack Obama, there were concerns about the presidential and leadership styles he would employ to lead the country and more specifically, how it would shape U.S. foreign policy on globally critical issues.

Some concerns stemmed from Trump's not having a political background, as he is a celebrity real estate businessman, has hardcore anti-immigrant and anti-Muslim stance and talks bluntly about sensitive issues. Such concerns were alarming for analysts and, of course, policymakers, as he was emerging as an unpredictable politician.

Now, his unpredictability, while not always negative (it could at times be a strategy) is mostly because he seems disconnected from political realities or simply not aware of circumstances and at other times due to personal clashes with other power mechanisms in U.S. governing bodies. Ultimately, due to Trump's unpredictability, inconsistency in U.S. foreign policy has intensified, leading to a chain of contradictions, mainly seen in dealing with the Syrian crisis in relation to Turkey and the handling of the most recent crisis between the Saudi-led bloc and Qatar. While these issues did not particularly emerge after Trump was elected, we cannot turn a blind eye to Trump's weakness in dealing with these issues and opening a new page in U.S. foreign policy by replacing the mechanism established during the Obama administration. In other words, due to domestic political challenges, the superpower's president has fallen into the trap of old dogs.

Let's examine some of these contradictions.

With Syria, first of all, the Trump administration has failed to reconstruct an agenda, which was a clear failure during the Obama administration. Obama's failure in having leverage opened the arena for Russia and Iran and ultimately the maintenance of the Bashar Assad regime. The Obama administration, while it initially supported moderate opposition groups and was against keeping Assad in power, eventually shifted its total focus to Daesh by limiting support for the moderate opposition and arming the Syrian Democratic Forces (SDF), which is predominantly led by the PKK terror organization's Syria affiliate Democratic Union Party's (PYD) armed People's Protection Units (YPG). Clearly, the U.S. recognizes the PKK as a terror organization, but it has contradicted this position by arming a group that has organizational links with it. Although there have been attempts to deny PKK and YPG links by Washington, U.S. officials previously recognized the connection between the two groups. For example, former U.S. Secretary of Defense Ashton Carter confirmed the link between the YPG, PYD and PKK while testifying before a Senate panel in April 2016. In addition, a U.S. Army Training and Doctrine Command's (TRADOC) Tactical Action Report (TAR) confirmed the affiliation between the two terrorist groups. In the unclassified report published in March, TRADOC described the PKK as "an armed separatist group" and further noted that the YPG had formed an alliance with the PKK in Syria. Examples confirming such contradictions with regard to supporting a group directly linked to a terrorist group can be easily multiplied and enriched.

While such inconsistency can be analyzed through the Syria crisis, it doesn't just affect U.S. foreign policy on Syria, but also American relations with its strategic NATO ally Turkey, as the PKK is a direct national security threat to Turkey, its citizens and its sovereignty. Even if analyzed within the perimeters of foreign policy on Syria, it is illogical to support a group for U.S. interests with direct links to another group recognized as a terrorist group, which is against U.S. interests.

Formed in 1978, the PKK has separatist aims and been in direct, armed conflict with the Turkish state. Since the beginning, more than 30,000 people have been killed. The PKK, which bases its ideology on the writings of Marx and Lenin, also functions in Iraq, Syria and Iran under the umbrella of the Kurdish Communities Union (KCK). In Syria, it emerges as the PYD and its YPG, in Iraq as the PKK, in Iran as the Party of Free Life of Kurdistan (PJAK). The KCK was created by its leader Abdullah Öcalan to increase his outreach across the region.

"I founded the PYD as I did PJAK. We did not use the word 'Kurdistan' in the party's title because we did not want to provoke the Assad regime. The PYD is connected to the PKK and acts on the PKK's orders," Öcalan said in an interview with Iraqi television Zelal in 2013.

The YPG factor in relations with Turkey

U.S. military support to the YPG, which ultimately supports the PKK, created tensions during the Obama administration and has brought Turkish-U.S. ties to all-time lows with the Trump administration. Recently, the U.S. administration said that arms support to the SDF and YPG will not get into in the hands of other parties that could pose a threat to Turkey, but many security analysts have suggested that this is impossible to monitor when there is strong fluidity between the YPG and the PKK, particularly when coupled with the lack of trust between the two NATO allies.

If the already existing lack of trust was not enough, last week, a senior U.S. general said that the YPG was convinced to change its name so that the U.S. could provide them military aid and a seat at the negotiating table. Gen. Raymond Thomas, commander of the U.S. Special Forces Command, said Turkey was equating the YPG with the PKK, so a solution was needed. Thomas's solution was for the YPG to be called the SDF. Now, while this could be classified as a grand U.S. strategy in ties with Turkey, at the same time, it assumes that Turkey would be blind or simply ignorant of the organizational ties between the PKK and YPG. Let's say this was a smart, secret move to trick Turkey, but the fact that it was done in front of recording devices and hoping that Turkey would not see or hear it is at its most kind definition either naive or thinking the other side is naïve.

The second inconsistency in ties with Turkey is the U.S. stance on the Gülenist Terror Group (FETÖ), which carried out the bloody, failed coup attempt on July 15 of last year against the Turkish government, state, its institutions, democracy and the future of its citizens. Turkey demanded the extradition of FETÖ leader Fetullah Gülen from the U.S. while Obama was still in the White House, but no concrete steps were taken. Gülen has been in the U.S. since 1999 in self-imposed exile in Pennsylvania. Ankara's hoped that Trump would be able to take concrete steps against Gülen, but despite boxes of concrete evidence and repeated demands from Ankara, Trump has also been slow to act against the cult leader who targeted Turkey's democracy. The failure to act against a cult that used F-16 jets, tanks and other weapons to kill 249 people and injure more than 2,000 in the coup attempt contradicts U.S. political rhetoric on being the protector of democracy.

While Trump was expected to be drastically different than Obama, his unpredictability failed analysts, as he does not seem to be much different than Obama concerning establishing and maintaining strong ties with its strategic ally Turkey, the only secular, Muslim democracy in the region.

Same contradiction in the Gulf row

Aside from issues concerning Syria and Turkey, Trump also exposed a series of inconsistencies, while dealing with events and developments in the Gulf-Qatar crisis.

When the crisis started on June 5 between Qatar and the Saudi-led bloc of mainly the United Arab Emirates (UAE), Bahrain and Egypt, Trump sent a series of tweets that backed the anti-Qatar bloc's decision to impose a blockade on Qatar. Saudi Arabia and others claimed that Qatar funds terrorism and demanded Qatar meet a series of demands, which are said to breach Qatar's sovereignty.

"I made a speech in Saudi. I said we got to stop funding terrorism. They [Qatar] were known as funders of terrorism. We can't have wealthy countries funding terrorism," Trump said. However, U.S. diplomats, including U.S. Secretary of State Rex Tillerson, who backed resolution of the crisis through diplomacy, did not back Trump's stark rhetoric against Doha. While Trump was accusing Doha of funding terrorism, Tillerson visited Doha and signed an agreement to help combat terrorism financing, as the U.S. has its largest air base in the Middle East in al-Udeid, which hosts around 10,000 U.S. soldiers. In addition, around the same time, U.S. Secretary of Defense Jim Mattis and Qatari Defense Minister Khalid al-Attiyah signed a letter of agreement for a $12 billion sale of 36 U.S.-manufactured F-15 fighter jets. It is also no secret that the U.S. and Qatar have carried out joint military drills. The Gulf crisis emerged right after Trump's visit to Saudi Arabia where he signed an arms agreement with the Saudis worth almost $110 billion "to support Saudi Arabia's defense needs," according to a White House statement.

Eventually, the White House toned down its statements against Qatar and called for dialogue to end the crisis. Now, a series of questions can expose inconsistency on the Qatar issue: Is Qatar a state that funds terrorism or is it a strategic U.S. ally in the Middle East? If the answer is yes, then how does the U.S. sign an arms deal with a state that funds terrorism? If no, are Trump's claims about Qatar a result of misinformation or were the claims made to sell more arms to Qatar and now that a military deal is signed, Trump urges the use of diplomacy to overcome the crisis?

These questions and inconsistencies reveal that U.S. policymakers say one thing and do another. They want Assad to go, but they will not take steps to remove him; they list the PKK as a terrorist organization but support its Syrian wing, the YPG, which poses a threat to NATO ally Turkey. They say they are pro-democracy, but allow the leader of FETÖ, which attacked Turkey's democracy, to live in the country; they say Qatar funds terrorism, which now seems to have been a ploy, yet sign military deals worth billions. Do U.S. policymakers really think the whole world is blind or naive?