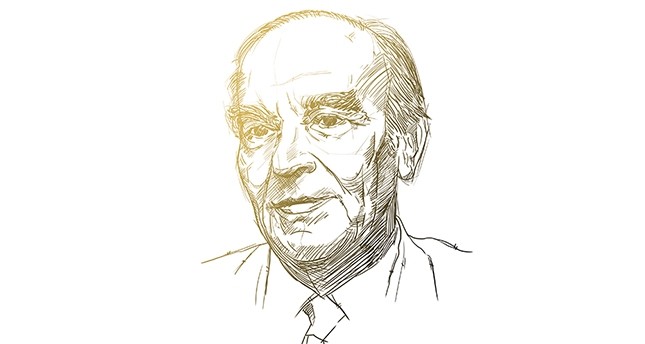 Alija, the leader of the Bosnian people's fight for independence and one of the most prominent thinkers of the 20th century, fully deserves his epithet ‘Wise King', leaving behind a timeless ethical struggle

The 20th century was an era of genocides. The most notorious of them, the Holocaust in Germany during World War II, was not a singular example unfortunately. The world witnessed a similar genocide in the 1990s in the middle of Europe, where the modern concept of human rights was born.

An unarmed and defenseless civilian population was massacred just because of their religious faith, before the eyes of the international community.

Despite the grim facts of the history of colonialism, attention is paid to not mention modernity and Westernness at a discursive level together with violence and its ultimate form, the concept of genocide. Though violence is associated with the East and non-modern and particularly with Islamic and Muslim communities, as the late sociologist Zygmunt Bauman notes, genocide is a phenomenon compatible with modernity. "Modernity is not only about producing more, traveling faster, becoming richer and moving about more freely. At the same time, it is about killing faster in a more efficient way, about scientifically designed and conducted massacre" (Life in Fragments, p. 253). Moreover, Bauman asserts that not only had modern rationalization and bureaucratization enabled the Holocaust in Europe, the growing gap between action and ethics has effectively removed mechanisms that could prevent future genocides. Just as the failure to stop the tragic events in Bosnia demonstrated.

One of the most brutal genocides of the 20th century was perpetrated against Bosnian Muslims. There was an effort to literally exterminate a community whose towns were besieged by Serbians, who were tortured and left to starve in concentration camps, whose men were killed while women were systemically raped to mix their blood. Mostar Bridge, a symbol of multiculturalism in Bosnia, which has special importance as the point where Europe comes into contact with Islam, was bombed by the Croats at a time when debates on multiculturalism were going on. Thus the idea of peaceful cohabitation in Bosnia, which had lasted for centuries during Ottoman rule, was destroyed.

Alija Izetbegovic, the leader of the Bosnian people's struggle for independence and one of the most prominent thinkers of the 20th century, was among the leading figures among Muslims in Yugoslavia, who were underrepresented in a country going through dramatic changes. Izetbegovic had paid a price for his Islam-inspired convictions by serving a total of nine years in prison in two separate terms, one in his youth and the other in his later years. Cherishing an ideal image of Bosnia, Alija attributed his respect for the coexistence of differences more to his Muslim identity than to his Europeanness. In 1994, when the war was raging, he told a German magazine, "My tolerance takes its source not from Europe but Islam. Yes, if I am tolerant it is mainly because I am a Muslim first and a European only after that.

Despite glaring facts, Europe is susceptible to some illusions that it is definitely unable to save itself from. For example, during this war in Bosnia, hundreds of churches and mosques were destroyed. Not a single one of them was destroyed by Bosnians. All of them were ruined by Europeans. Turkish rulers may not have been the most tolerant administrators in the world, but all Christian communities and their most important monuments from the Middle Ages survived 500 years of Turkish rule. This is a fact. Famous mountain monasteries in Fruska Gora, not far from Belgrade, had stood intact during 300 years of Turkish rule. But they could not survive three years of European rule. They were burnt and destroyed during World War II. Fascism and communism were born not in Asia but in Europe. And even today, Europe has not reacted much against the rise of fascism in the Balkans. I value Europe and appreciate it. Yet I believe that it thinks more highly of itself than it should" (Inescapable Questions: Autobiographical Notes, p. 196). That pithy answer, which contains great wisdom, draws attention to how the centuries-old culture of cohabitation was wasted by Europeans themselves and invites them to humbly face the facts. However, Alija expressed this not as an outsider but an insider, who is himself a European. The European and Muslim dimensions of his identity do not rule each other out.

Saying that he belongs to the West in terms of mind and thought and to the East in terms of sprit and sentiment, the thinker has posited his European Muslim identity as a synthesis, in line with the views he expressed in his book "Islam between East and West." According to him, everything in the universe exists in pairs; the being exists in dualities like body-soul, matter-meaning, and culture-civilization.

Only Islam could have reconciled these dualities. Alija argued that we can talk about only three types of worldview. The first is materialism as represented by socialism, which focuses exclusively on the outer world. The second is faith, which is defined as religion in the West and focuses exclusively on the inner world. And finally there is Islam, which synthesizes and transcends the positive aspects of these two and establishes a balance between the dualities, thus forming a third way. With that book he penned during the Cold War, Alija offered a very brave approach in terms of exploring the place and potentials of Islam in a bipolar world and accommodated Islam and the European identity in his character simultaneously, as compatible with the nature of Islam, which overcomes all contradictions.

But that approach employed by Alija and the Bosnian community he represented was not embraced by Europeans. Even in many instances when there is no difference with regard to ethnic origins, the religious identity of the Bosnians was always viewed by Serbians, Croats and those Europeans that remained silent to massacres as the "other" and even as an Ottoman dagger driven into the heart of Europe. Indeed, it's no coincidence that when preparing for the genocide in Srebrenica, Serbian commander Ratko Mladic said, "The time has come to take revenge on the Turks."

Beyond a statesman and a leader

Alija, who fully deserves the epithet "Wise King," has made a lot of contributions as a thinker and these should be dealt with in other works. His contributions as a statesman and a leader, which is the subject of this piece, must be analyzed with reference to his insistence that any political and military struggle must be based first and foremost on a moral and legal basis. The source of ethics and the ethicalness of man is an indispensable part of his philosophy. In his books "Islam between East and West," "Notes from Prison: Escape to Freedom" and "Inescapable Questions: Autobiographical Notes" and in various speeches, he has delved deeper into this topic.

Before his identity as a statesman materialized, his ethics stood out as a fundamental concept that defines his whole thinking, religious and political stance, and worldview. With observations on everyday life as a thinker, he supported his view that what gives meaning to life is ethics and that it's impossible to separate oneself from ethics, arguing that this ethicalness necessarily leads to God. It wouldn't be wrong to say that Alija's strong emphasis on ethics and ethicalness has defined the nature and course of the struggle he and thousands of Bosnians put up. Because despite all the war crimes, aggression and massacres by Serbians and Croats during the war, Alija took great pains to keep his soldiers and people on a moral ground and stated the righteousness and necessity of this principle in almost every speech. Saying, "We will win because we are morally superior," Alija addressed his soldiers on a winter day during the most critical stage of the war with the following words: "You see, Allah put us through a painful ordeal. We were slaughtered, our women and children were killed, our mosques were burnt down, but we will not kill women and children or burn churches. We won't do this because, though such things happened in some individual cases, this is not our way. We will win, because we respect other people's religion, ethnicity and different political convictions, because we are trying to remain honest even in this difficult situation. And it's definitely forbidden for us to destroy other people's temples" (Inescapable Questions: Autobiographical Notes, p. 194).

Ethical Stance in the Face of Evil

Alija's extensive contemplation on ethics bore fruits during the war, helping to contribute to the morale of both his people and his soldiers and maintain their moral superiority. But it was a bitter fruit for it emphasized forgiveness, not revenge. As a leader, Alija advised his people to not retaliate against the pains their enemies had inflicted on them, while keeping them in mind. He asked them to be patient and to cherish the idea of Bosnia despite all the attacks and destruction. He invited the Croats, Jews and other ethnic and religious groups, who had left their towns while the war was going on, to protect the multicultural Bosnia and oppose the aggressors' desire to separate the population along rigid lines.

Alija handled the issue of existence of evil in the world, which incites fundamental theological and philosophical debates, in relation to adding meaning to life. He asserted that good cannot exist without evil and that everything will be rendered mechanic and meaningless if good and its counterpart evil don't exist (Notes from Prison: Escape To Freedom, p. 14). That horizontal perspective urged people to respect even the existence of evil in universe. After all, he firmly believed that both good and evil come from Allah. That's why he insisted on ethicalness in the fight against evil. He has never welcomed destructive ideologies and movements and even had those soldiers, who had gone to extremes during the war and succumbed to the desire for revenge, brought before court.

Today, the concept of jihad is viewed from a rather narrow perspective. Being associated almost entirely with war, it has become an alibi for resorting to extremely brutal methods, due to terrorist groups claiming to wage jihad and organizations and groups using them to strengthen Islamophobia. One of the struggles that really deserved to be described as jihad was Aliya's fight along with his people, but even he regarded that fight as a "lesser jihad" remembering the Prophet's emphasis on "moving from the lesser to greater jihad." In his opinion, greater jihad meant making peace. For fighting at a time of huge destruction is easier than making peace and what is difficult and arduous is to restore peace.

Alija was a world-forming leader, who believed, "You cannot win the world through rejection, but only through affirmation. In fact, affirmation of the world is a prerequisite for changing and conquering it" (Notes from Prison: Escape To Freedom, p. 39). He viewed the vicissitudes of life as a fact, evaluated them and struggled on a legitimate ground to change them. And with that attitude, he has left behind a timeless struggle of ethics.