Maybe the EU is moving away from Turkey 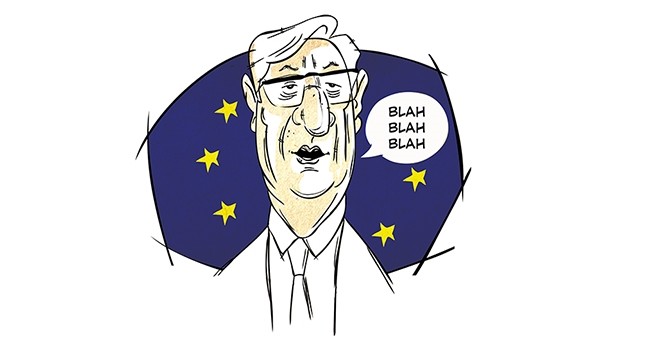 With a pragmatic approach, Juncker essentially wants Turkey to be relegated to a weaker position, the accession process to go on amid uncertainty and the EU to evade political responsibility if relations collapse

European Parliament on Nov. 16, 2016, voted on a recommendation calling for a temporary freeze on EU accession talks with Ankara. That recommendation has apparently had an impact since European Parliament approved an advisory report, voting 477 to 64 in favor, this time on July 6, calling for the suspension of accession negotiations with Ankara "without delay." That call was a first in the history of the EU. Already, everything about Turkey, including the fact that it has been nearly 60 years since Turkey's accession process began, somehow represents a first.

It was understood from the advisory report prepared by European Parliament Turkey rapporteur Kati Piri that the reason behind this radical call was Turkey's shift to a presidential government system after popular approval of the constitutional referendum on April 16. Moreover, the report called on EU member states to "formally suspend accession negotiations with Turkey if the constitutional amendment package is implemented and unchanged."

In other words, the confrontation was between European Parliament and the Turkish people who approved that change in the April 16 referendum, not the Ankara government. The Venice Commission, the Council of Europe's advisory body on constitutional law, has issued a report on the constitutional amendments, but it can also be regarded as an example of a double standard. Prime Minister Binali Yıldırım called the report biased, wrong and politically motivated.

That report was important. Indeed, it was full of factual errors and political arguments of the opposition bloc, intended solely to influence public opinion during the referendum process. As a deputy and a member of the Parliamentary Constitution Committee involved in the preparation of the constitutional amendment package, I would like to point out some of these errors.

For example, the report claims that the constitutional amendments package was not voted on in Parliament by secret ballot. However, deputies cast their votes in cabins. It was the cameras brought by main opposition Republican People's Party (CHP) deputies that violated the secret ballot rule. In addition, there is no stipulation in internal regulations that votes should be cast in cabins. It only stipulates that ballots must be placed in envelopes and put in the box. The report says that tensions surged in Parliament over a debate on the violation of secrecy. But tensions erupted due to the aggression of CHP deputies. Aylin Nazlıaka, an independent deputy and a former CHP deputy, handcuffed herself to the speaker's podium, and during the ensuing scuffle CHP and Peoples' Democracy Party (HDP) deputies destroyed the podium. CHP Antalya Deputy Niyazi Nefi Kara approached Justice and Development Party (AK Party) Deputy Chairman Fatih Şahin from behind in front of everyone and broke his nose. The report makes no mention of these incidents.

Again, the report claims that the constitutional amendments package was adopted in Parliament through a fait accompli. However, all the articles of the proposed bill were debated individually at the parliamentary committee, of which I am also a member, for 11 days and in the plenary session for nine days. During the plenary session only, 91 CHP deputies took the floor 325 times and 12 HDP deputies did 44 times.

It is argued that Parliament choosing seven members of the Supreme Board of Judges and Prosecutors (HSYK) will violate judicial independence. In many advanced democracies around the world, members of constitutional courts and higher judicial bodies are appointed by presidents and parliaments whose legitimacy comes from the will of people. For instance, in the Netherlands the queen appoints them. In Turkey, members of these critical bodies used to be appointed by incumbent members. Thus, an ideologically motivated judiciary that backed military coups was created. It is interesting that the Venice Commission criticized such a democratic change to this model. In a previous report in 2010, the commission recommended the selection of HSYK members by Parliament. Finally, the report alleges that there is no judicial control over presidential decrees. However, one of the reforms introduced in the constitutional reform package envisions the review of presidential decrees by both the Constitutional Court and the Council of State. These decrees can be overridden by Parliament, as well.

In short, reports from both the Venice Commission and European Parliament contain lots of factual errors. And what is worse, these two bodies fashion themselves as powers above the democratic preferences of the citizens of Turkey. They expressed their desire to suspend accession negotiations with Ankara, even if through non-binding resolutions. That approach itself is a completely political stance. But nobody mentioned this anomaly.

Speaking to German public broadcaster ARD in an interview aired on Aug. 3, European Commission President Jean-Claude Juncker said EU accession talks with Ankara should not be suspended. Responding to a question about whether or not accession talks between the EU and Turkey should be ended honestly, Juncker said: "I don't think so." If only he thought so, since it would be more consistent.

At a time when overly irrational attitudes on Turkey, factual errors, biases and a pervasive fear of President Recep Tayyip Erdoğan stand out, Juncker's remarks can be viewed as a positive divergence from the mainstream. At least they represent a more judicious evaluation among the Eurocrats who are convinced that Turkey's membership process should be ended. As you know, it turned out that the German government, via Foreign Minister Sigmar Gabriel, had sent a letter to the EU calling for the reduction of its financial support for Turkey for the promotion of democracy and the rule of law. Hence, we learned that Chancellor Angela Merkel's administration called on the European Commission to study the question of the full termination of financial assistance allocated within the framework of accession negotiations, and to freeze talks on the EU-Turkey customs union agreement update. Gabriel said in mid-July that the limit of tolerance has been reached in relations with Turkey and that Germany will take different steps on three separate issues at the first stage.

Remarks from the EU on this letter were largely responsible. European Commission spokeswoman Mina Andreeva said she would not comment on speculation, pointing out that the EU-Turkey High Level Political Dialogue meeting was held recently, adding: "Modernization of the customs union agreement was proposed by us to member states." Again, European Commission spokesman for Humanitarian Aid and Crises Management Carlos Martin Ruiz De Gordejuela said that maintaining the EU's relations with Turkey is necessary in light of the latest developments and that pre-accession assistance focuses on areas like reforms, fundamental rights and rule of law.

In fact, the European Central Bank has recently cut credit to Turkey by one-fourth. Besides that, the EU has not fulfilled its promise to provide financial support to Ankara for refugees.

Juncker has also contradicted the German government on financial assistance, for which Andreeva preferred the word "speculation." Juncker criticized the media for exaggerated claims about the EU's pre-accession funding for Ankara, saying that the EU is meticulous about this financial assistance. Juncker added that out of 3 billion to 4 billion euros made available for pre-accession funding only 189 million euros have been delivered so far.

How glaring the contradictions are.

But Juncker says that the EU faces a dilemma over the customs union upgrade and claims that "Turkey is slowly, and sometimes with big steps, moving away from Europe." However, what separates him from the others is that he argues for the continuation of talks between the EU and Turkey without emphasizing the issue of full membership, because he thinks that it would not be wise to shift the burden of responsibility, which must be on Ankara's shoulders, onto the EU.

Indeed, while Juncker sounds more coolheaded, he fails to offer a constructive critique of the EU's approach toward Turkey. Nobody finds it strange that one country is singled out as faulty and guilty. Although we know that it is impossible to accuse a single party even in the most legitimate, critical and difficult circumstance, the EU is faced with an eclipse of reason. Perhaps it is specific to this period, but it is unpleasant in any case.

What Juncker really says is: Let Turkey remain within the EU's lopsided sphere of influence in a much weaker position than it has been during the last 60 years, in an ambiguous situation in which full membership is not even mentioned. Let us not keep even a promise to extend such a small amount as 3 billion to 4 billion intended to protect Europe from a huge catastrophe, to be spent under the EU's control on refugees. Let us institute a new form of tutelage over the democratic preferences of Turkish citizens through political reports that are full of errors and biases and let's design politics to the liking of the EU.

Juncker's remark that "[i]t wouldn't be wise to shift the burden of responsibility, which must be on Ankara's shoulders, onto the EU" is an allusion to Erdoğan's previous calls on the EU, urging it to make a decision with regard to its double standards and stalling Turkey's membership process. Erdoğan had said: "This relationship cannot go on as it is. Chapters should be opened, the process should proceed and have a definite timeline. It is not the end of the world though if it doesn't happen. But the EU should make a decision about Turkey now."

With a pragmatic approach, Juncker essentially wants Turkey to be relegated to a weaker position than it has been at for the last 60 years, the accession process to go on amid uncertainty that does not even mention membership and the EU to evade political responsibility if relations collapse.

This is a very problematic proposal that Turkey would never accept, especially after that point.

Who has a problem with whom?

Turkey is not at odds with European values. Nor does it oppose the EU. It only demands an honest, open and equal relationship with the EU. I think that that is what comes as a surprise and is rejected. On the other hand, Germany appears to us to exert serious control over European institutions in its political rift with Turkey. Germany's attitude results from dynamics other than Turkey's EU membership process, but it seems to be rather influential.

Turkey will not waste another 60 years in the face of such double standards and low-profile attitudes loaded with one-sided pragmatism.

In order for a serious conversation to take place, the EU should face the facts about Turkey. As Erdoğan said, it is not the end of the world for Turkey if ascension fails.

Turkey will not let the EU evade its responsibility.