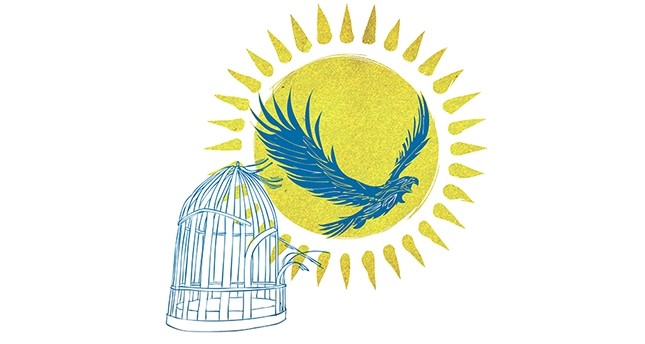 Kazakhstan's decision to switch to the Latin alphabet will serve President Nazarbayev's identity politics, which aim to create a secular Kazakh nation in the wreckage of the Soviet legacy

Decades of Soviet rule institutionalized formal and informal Russian culture and mentality in state and society levels in Central Asia and the Caucasus. Hence, the post-Soviet Central Asian Turkic republics have been striving for nation building and state formation over their 25 years of independence. Accordingly, some elements of Russian influence that have been cemented since the Russian Empire's invasion of Turkestan in the 19th century have diminished one way or another in all these countries.

The process of their post-Soviet transformations from the communist state apparatus and the planned command economy have been consistently shaped by history, culture and religion, as well as Westernization and Turkification to some extent.Kazakhstan is one of the Turkic countries in Central Asia that started an assertive and massive modernization process under the auspices of President Nursultan Nazarbayev, who has been ruling the country since the fall of the Soviet Union. No doubt, Nazarbayev is the most assertive leader in comparison with Central Asia's other autocrats, and he has succeeded in creating an economically prosperous and politically stable country during a turbulent era in a tumultuous region.

Located at the heartland of the Eurasian steppe, Kazakhstan has a vast territory and unique geopolitical position stretching from east to west, and mainly landlocked between Russia and China. It is the only country that borders all the other Turkic republics of Uzbekistan, Kyrgyzstan and Turkmenistan in Central Asia and is across the Caspian Sea from Azerbaijan. It has more than 17 million people, nearly 65 percent of whom are ethnic Kazakhs. Some 4.5 million Russians constitute the second-largest ethnic group, which proportion fell roughly from 40 percent to 23 percent of the population since Kazakhstan became independent in December 1991.

Nazarbayev has so far maintained well-balanced diplomacy between Russia, China, Turkey and the West in his foreign affairs while building a new Kazakh state at home thanks to the country's rapid economic modernization. In doing so, Nazarbayev and his ruling elites have transformed Kazakhstan from a Soviet patrimonial model to a quasi-authoritarian, but open democratic transition with the help of Western external underpinnings such as the EU's neighborhood policy. In a recent move, he devolved some of his executive powers to Kazakh parliament and the cabinet, signaling a political transition in the not-too-distant future.

Alphabet as tool of identity politics in post-Soviet Kazakhstan

Starting from scratch, Central Asia's omnipotent leaders have continued to ossify titular identities, which were constructed by Stalin under the Soviet Nationality Policies during the interwar era. The Soviets were inspired by Ilminsky's methods of Russification of Muslim communities, which could be described as national in form, Orthodox in content, in early 20th century imperial Russia. As a state response to the Basmachi movement, which was a Turkic-Muslim uprising against Soviet rule in Turkestan, Stalin further continued divide and rule policies by creating titular republics under nomadic and tribal names of the Turkic peoples in the region. In addition, the top Soviet leadership first replaced the Arabic script used in the region with the Latin alphabet to detach them from the Islamic past. This was then changed to the Cyrillic alphabet in a continuation of Soviet identity politics.

Since then, the Russian language has become a lingua franca in Central Asia where the overwhelming majority of people have been speaking Turkic languages for centuries. Speaking these languages had differentiated the ethnic identities of Central Asia's Turkic peoples in the course of time, but the use of Russian became the main driving force in the construction of Homo Sovieticus under the flagship of communist internationalism throughout the 20th century.

Although Russian has remained as the language of inter-ethnic communication among former Soviet peoples, some of Central Asia's Turkic republics started to change their writing systems from the Cyrillic alphabet to the Latin alphabet by the new millennium. Azerbaijan, Uzbekistan and Turkmenistan have already switched to a modified Latin writing system of their own, but Russian is still kept as an official language side by side the respective Turkic languages in these countries. In Kyrgyzstan, changing from Cyrillic is considered an additional onus for the country's fragile economy. As such, it is neither feasible nor affordable for the time being for the Kyrgyz government.

As for Kazakhstan, the alphabet change has also been hotly debated since Nazarbayev publicized the issue more than a decade ago following neighboring countries' switch to Latin letters. Given the large size of its ethnic Russian minority, the Kazakh leadership has deferred the issue to the present at a time when all political, economic and cultural conditions are met to make such an immense socio-cultural transformation by a deliberate political action. Thus, Nazarbayev has called for an alphabet change in an article last April in the state-run, Kazakh-language newspaper, Egemen (Sovereign) Qazaqstan.

He has ordered that Latin letters be used in all official documents, books, newspapers, media and other areas by 2025. Kazakh authorities will start reforming cultural and education materials by the end of this year to switch to 31 Latin letters instead of its 42 Cyrillic letters. Nazarbayev and his governing circle believe that the Soviet decision to impose the Cyrillic alphabet on Kazakhs in 1940 was a politically motivated act to impair historical Kazakh national identity. Therefore, abolishing Cyrillic means reversing the past in accordance with cultural and sociological needs of the new Kazakh identity, which its emphasis on a nomadic tribal past and linguistic boundaries of the country.

As a reaction to Nazarbayev's efforts to disarticulate Kazakhstan and Kazakh identity from the Russian and Sovietpast, Russian President Vladimir Putin told the media in 2014 that Nazarbayev has "created a state on a territory that never had a state." On the one hand, Putin's statement was a confession of Soviet Nationalities Policy, which constructed and produced subaltern identities and states, including Kazakhstan, in Central Asia. On the other, it was a distortion of historical realities that indicate the hitherto existence of Kazakhs in Kipchak tribes in the region. Nazarbayev resumed the war of words with Putin as he claimed that Kazakhs are the true and direct descendants of Huns, Göktürks, the Golden Horde and the Kazakh Khanate in Turkestan before the Russian conquest in the 19th century.

In brief, changing the alphabet will serve Nazarbayev's identity politics, which aim to create a secular Kazakh nation in the wreckage of the Soviet legacy. In this vein, Nazarbayev traces the path of Atatürk, who implemented the language revolution, which also included the adoption of the Latin alphabet, in early republican Turkey to form the new Republic of Turkey after the fall of the Ottoman Empire. Kazakhstan has so far increased economic, political and security ties with Russia in the region through Russian-led organizations like the Commonwealth of Independent States, Eurasian Economic Union and Collective Security Treaty Organization. Yet, the Kazakh leadership believes that full-fledged independence lies in the preservation of a solid Kazakh identity, which requires standing aloof from Russia in cultural spheres.

Latin alphabet as a means of Turkic globalization

While he was diminishing Russian influence in Kazakhstan, Nazarbayev, who is considered a wise man in the Turkic world, has become a dauntless advocator of Turkic integration since the Soviet collapse in the region. He pioneered several gatherings of Turkic states, such as the Turkic-Speaking Countries Summits in the 1990s. The summits could not yield the intended results for the participant countries at the time, but they precipitated the formation of the Turkic Council in 2009. Founded by initiatives by Kazakhstan, Azerbaijan, Kyrgyzstan and Turkey, the Turkic Council has become a symbol of the long-anticipated Turkic unity.Rather than being a political and economic unit, the Turkic Council has started to promote cultural, educational and communicational channels between member states. In this context, the Latinization of Turkic languages will facilitate the council's envisaged work, which at the end aims to accelerate integration, interaction and cooperation in a wider region between Turkey, Central Asia and the Caucasus. Uzbekistan and Turkmenistan are seen as potential members in the future, whose participation will definitely transform the council from a regional organization to an international body for the Turkic world.

However, Kazakhstan's decision to switch to the Latin alphabet will positively contribute to the council's function. The Kazakh capital, Astana, hosts the International Turkic Academy, a sub-branch of the Turkic Council, which is dedicated to scientific research, educational exchange, and the language, literature and cultural features of Turkic history and civilization. Nazarbayev wrote in his article in Egemen Qazaqstan that the alphabet change would pave the way for his country's opening up to the world since the overwhelming majority, approximately 70 percent, of the world's population uses Latin letters.

Given the importance of Kazakhstan in Central Asia, the approximation of Turkic languages via the Latinization of formal and informal culture and institutions will lead to a process that could be called as "Turkic globalization." The term properly refers to setting up a common language and ground by eliminating the alphabet obstacle among Turkic peoples. In the current situation, Kazakhs and Kyrgyz speak somewhat similar languages, both in the South Kipchak branch of the Turkic language family, and Tatars in Russia speak a language in the North Kipchak branch. Most people in Uzbekistan and the restive northwestern Chinese province of Xinjiang, also known as East Turkestan, speak the Uyghur and Chagatai dialects, while Turks in Turkey and Azerbaijan as well as Turkmen in Turkmenistan use the Oghuz dialect of the Turkic language.

The early Turks in history had their own writing system, known as Göktürk in a runic alphabet, but the Islamic conquest of Turkestan after the eighth and ninth centuries brought the Arabic alphabet to the region. Since then, Arabic letters were in use for centuries and united the Turkic region under an Islamic identity. Now, the Latin alphabet takes this mission as post-Soviet Central Asian republics dismiss the Cyrillic alphabet one by one. Such an unprecedented socio-cultural transformation opens new gates for Turkey, whose political leadership, academic circles and business world have been very keen to integrate with the region since the fall of the Soviet Union.