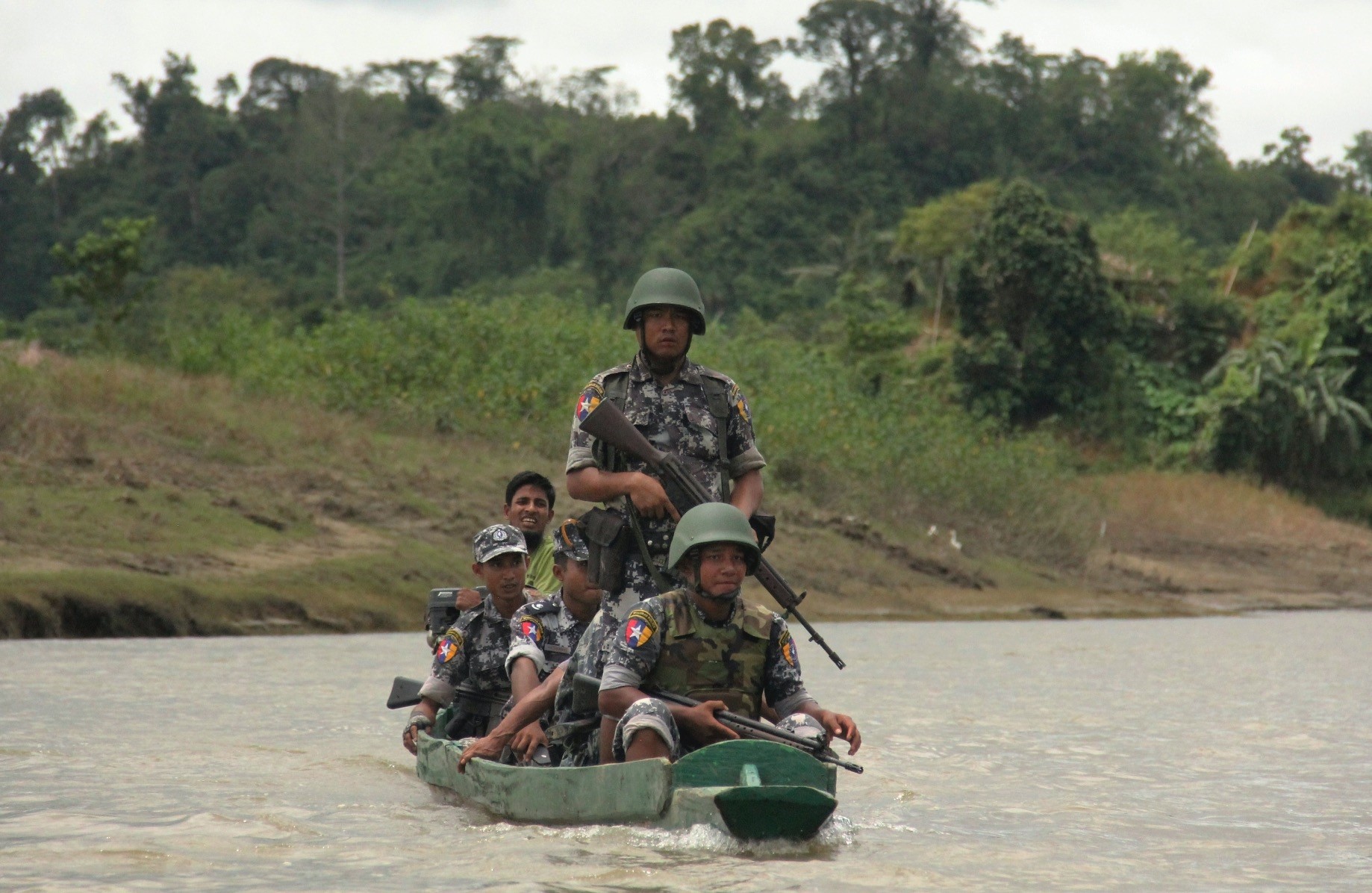 Myanmar Border Guard Police officers travel in a wooden boat at the Tin May village, Myanmar, July 14.
by Mustafa Fatih Yavuz Sep 11, 2017 12:00 am

While witnessing hundreds of innocent Rohingyan Muslims being killed by the Myanmar military, it is really hard to tolerate the Israeli state selling arms to the Myanmar government

Rohingyas, who are known as the Palestinians of Asia due to the statelessness they suffer, which was first created by the laws enforced by a military junta regime in 1982, are the subject of ethnic cleansing by Myanmar and Buddhist gangs supported by Israeli arms exports.

Most Rohingyas reside in Rakhine state, which is located next to the border with Bangladesh, and are not considered to be citizens of Myanmar. Their basic rights have been denied by the regime for years on the basis of the 1982 Citizenship Law, according to which there are three types of citizenship: Full, associate, and naturalized. Full citizenship is primarily based on membership of nations that have settled in Myanmar prior to 1824 the date of the first occupation by the British that lasted until 1948. However, the Rohingyas are not considered to be among them and are excluded from full citizenship. Myanmar considers them immigrants from Bangladesh and prefers to use the term "Bengali" or "Muslims in Rakhine State" instead of Rohingya.

Even though Myanmar's latest atrocities toward its Muslim minorities started with attacks from an insurgent group called the Arakan Rohingya Salvation Army (ARSA), it was not the first time that Myanmar has come to the fore with cases of ethnic cleansing. In 2013, Human Rights Watch said that the regime was conducting an ethnic cleansing campaign against Rohingya. In 2016, the head of UNHCR in Bangladesh, John McKissick, declared that Myanmar was ethnically cleansing Rohingya Muslims. Also, Amnesty international in its report published in June 2017 mentions displacements and human rights violations conducted by the Myanmar Army. Also recently, 87,000 Rohingya fled from their villages due to increasing violence, extrajudicial killings and the destruction of villages seen by satellite images and corroborated by the testimonies of the Rohingyas who fled to Bangladesh.

Since Myanmar's acts are well known to the world, a number of countries and the EU laid an arms embargo on the regime. Even though most sanctions were lifted in 2012, the EU has operated an arms embargo since 1996, which comprises arms, munitions and military equipment. However, contrary to public opinion on Myanmar and arms embargos, Israel has kept arming Myanmar's military regime for years.

The relationship between Israel and Myanmar goes back to 1949. Myanmar is one of the first countries in Asia that recognized Israel as a state and established its diplomatic ties in 1955. From that date on, Israel kept good ties with Myanmar even after the military coup in 1963 that brought Myanmar under the military junta. Although the information provided by the official website of Myanmar on ties with Israel points to cooperation on agriculture and education, they refrain from giving information about military cooperation and the arms trade.

In 2015, Myanmar's military chief of staff, Senior General Min Aung Hlaing, made an unusual official visit to Israel with the aim of developing better military relations. During his four-day visit, he visited members from important Israeli military industry companies, such as Israel Aerospace Industries, Elbit Systems Limited and Alta and also the Israel Air Force base, Ashdod naval base and the Gaza Division base, in line with the visit's aim to strengthen military cooperation.

After the visit, Myanmar purchased Super Dvora patrol boats from Israel. Hlaing published on his Facebook page that he and his delegation rode and examined a Super Dvora 3 patrol boat, which was the same type of speed coastguard vessel Myanmar Navy ordered. It is not the first time that Israel has sold weapons to Myanmar. According to the report published by Amnesty 12 years ago, Israel exported weapons such as air-to-air missiles to Myanmar. In the 1990's, Myanmar bought 155 mm cannons made by an Israeli firm. Israeli firms also provided help to upgrade part of Myanmar's arsenal.

Israeli Minister of Defence SIBAT (Israeli MOD International Defense Cooperation Directorate) paid a visit to Myanmar with the head of the branch Brigadier General (Ret.) Michel Ben Baruch with the aim of promoting cooperation between each regime's armed forces. This visit came about while the U.N. Human Rights Commissioner published a report in June 2016; pointing to crimes against the Muslim minority in Rohingya and Israeli defense companies are part of these crimes that Myanmar has been committing for years. In addition to state level security cooperation, private Israeli firm TAR Ideal Concepts, which was established in 1980, has been helping provide field training for Myanmar's army.

Following the visit of the Myanmar chief of staff to Israel, a number of human right activists and attorneys in Israel submitted an urgent petition to the Israeli Supreme Court demanding an end to Israeli military exports to Myanmar. However, right after the petition, the Defense Ministry intervened in the judicial process and said that the court has no jurisdiction over the decision of selling weapons to Myanmar and saw the arms sale as clearly diplomatic. Nevertheless, it is expected that the Supreme Court will see the case on Sept. 25.

Israel is not only selling weapons to Myanmar. Actually, the country has sold weapons to countries in which even a small rifle can trigger a civil war.

According to reports of the international human rights organizations, Israel violated another embargo on South Sudan and sold weapons to the area during the civil war. Israel also trained South Sudan forces as they did in Myanmar.

During the Rwanda Genocide, where 1 million men lost their lives according to U.N. estimates, it was Israel supplying weapons to the Hutu militias. That controversial arms deal to the Hutus was scrutinized by the Tel Aviv court with a petition prepared by Attorney Eitay Mack to reveal documentation of the genocide. However, the court rejected the petition. Israel also supplied weapons to Serbs during the Srebrenica massacre that was the first mass killing of in Europe after the Holocaust. Israeli defense exports included ammunition and rifles and also training that has been proven with the personal journal of General Ratko Mladic showing Israeli arms ties with Israel at that time. That scandal lead to requests to the Israeli courts Attorney Mack and Professor Yair Oron to reveal the relevant documentation. However, the court rejected the petition, this time on political basis, and declared that exposing Israeli involvement in genocide would damage the country's foreign relations and would dominate public interest.

* Researcher at TRT World Research Centre, a graduate student in the Department of Conflict Resolution and Mediation at Tel Aviv University