How effective is Turkey's Africa initiative? 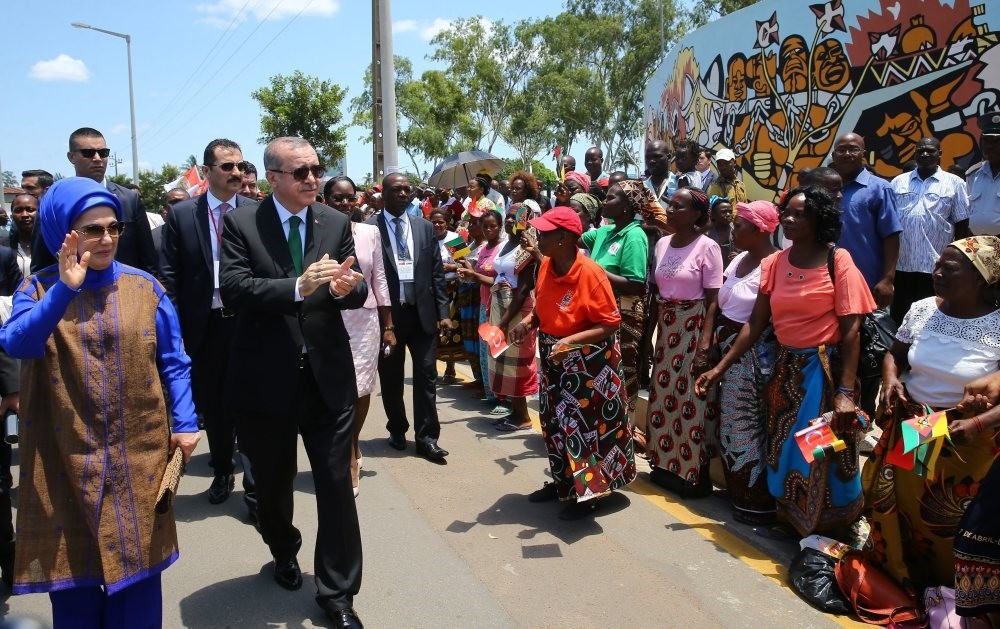 President Erdou011fan, accompanied by his wife First Lady Emine Erdou011fan, applauds the crowd during his visit to Mozambique to discuss on boosting the relations between Turkey and African countries, Jan. 24
by Abdinor Hassan Dahir Sep 19, 2017 12:00 am

Turkey's engagement policy in Africa is effective and fruitful, paving the way for a new era in bilateral relations between Africa and Turkey

Turkish foreign policy has shifted in the last two decades mainly due to the end of the Cold War and the subsequent disappearance of the Soviet bloc. Since then, Ankara has adopted a multilateral and comprehensive foreign policy by establishing relations with eastern regions, particularly regions with which it had historical ties before the creation of the Republic of Turkey in 1923. These regions include Central Asia, the Middle East and Africa. So now it's imperative to examine Turkish engagements in Africa. As a young African man with considerable understanding of the continent and strong cultural connections with the Middle East, I think Turkish engagements in Africa are effective and beneficial for both sides.

Historically, the Ottoman Empire, which ruled some parts of the world for over 500 years, had a foothold in Africa. North Africa, which is geographically nearer to Spain and the rest of Western Europe than Turkey and the Middle East, was regarded as part of the greater Ottoman state and was defended against Spanish incursions. In sub-Saharan Africa, Ottoman influence was minimal and to some extent did not exist. When the Turkish Republic was created in 1923, Ankara adopted a foreign policy based on Westernization and secularism, which reflected the Kemalist perception of international relations. The building blocks of this policy were secularism and modernization by looking to the West for direction (westernization) and cutting ties with the Ottoman past, keeping the country together through securitization based on the defined borders of the republic, and pursuing inward-looking noninterventionist/nonrevisionist norms. The latter was encapsulated in Ataturk's "Peace at Home, peace in the world" approach, which still has considerable impact on today's Turkish foreign policy. During this period, relations with Africa received less attention, and in the eyes of the Turkish populace, Africa was regarded as a problematic and remote region. However, Turkish policy makers modified Ankara's foreign policy principles after the collapse of the Soviet Union. This has led to establishing effective relations with Africa, especially countries in sub-Saharan Africa.

The end of 2017 will mark two decades of Turkish activism in Africa. Following its "opening to Africa policy" adapted in the Action Plan 1998 as well as the subsequent declaration of 2005 as "The Year of Africa," Turkey has been active on the African continent since 2002 when the Justice and Development Party (AK Party), Turkey's ruling party, came to power. In the same year, the African Union granted Turkey observer status at the organization's headquarters in Addis Ababa, Ethiopia, and in 2008, the first ever Turkish-Africa economic summit was held in Istanbul with representatives from 50 African countries attending. The same year, then Turkish Foreign Minister Ali Babacan declared that Africa had a significant place in Turkish foreign policy, and for this reason, Turkey increased its diplomatic missions in the continent by opening 15 new embassies. Since then, the Turkish presence is hugely felt on the continent, and its cooperation with African states has increased considerably. In 2011, the African Economic Outlook (AEO) jointly produced by the African Development Bank, the United Nations Development Programme (UNDP) and the United Nations Economic Commission for Africa (UNECA), described Turkey as one of the most important partners in Africa.

Considering these successful gains in bilateral relations, there are at least four main entry points of Turkey's involvement in Africa: First, Turkey has had historical ties with Africa that date back to the 15th and 16th centuries. During this period, North Africa was an integral part of the Ottoman Empire. Turkey developed relations with sub-Saharan Africa in the 19th century when the decolonization process began.

Second, Turkey is determined to make allies by increasing economic and political ties with various states on the continent. One notable project that has marked a turning point in Africa-Turkey economic relations was the launching of "The Strategy Development of Economic Relationships with Africa" in 2003. Ever since, Turkey has pursued a very robust, cohesive foreign policy to increase its ties with African states. Ankara now operates 39 embassies across Africa. As part of the opening to Africa policy, Erdoğan, as both prime minister and president, embarked on 39 trips to Africa and became the first Turkish leader to visit 23 African countries in the history of the Republic of Turkey. On the economic front, Turkish flag carrier Turkish Airlines (THY) has extensively increased its operation and daily flights to and from the African continent.

The number of destinations has dramatically risen from 13 in 2009 to 51 in 2016. Turkish Airlines is now arguably the largest carrier operating in Africa on a daily basis, covering 31 countries. In economic terms, Turkey's trade relations with Africa are gradually increasing. In 2015, Turkey's total trade volume with Africa was $19.5 billion, a 16 percent increase from 2008 and a 258 percent rise from 2003. Turkey's share of Africa trade volume rose to 2.3 percent in 2014, and African states' share in Turkey's trade volume totaled 8.7 percent in 2015. In 2003, Turkey's share in Africa trade volume was 1 percent, while Africa's share in Turkey's trade volume was 4.5 percent. In 2015, Turkish FDI (foreign direct investment) in Africa surpassed $6 billion, while it was less than $100 million in 2003. During the last 10 years, the Turkish Foreign Economic Relations Board (DEİK) has opened economic councils with its counterparts in 31 African countries, 19 of them in sub-Saharan Africa. Additionally, Ankara has established 26 commercial consulates in 26 countries across the continent and inked trade and economic pacts with 38 African nations to lay the foundation of an effective contractual basis for reciprocal economic ties.

Furthermore, Turkish businesses contractors are among the major forces on the continent with increasing shares. Since the 1970s, Turkish contractors have carried out more than 1,150 projects worth $55 billion in different parts of Africa. Third, Turkey's presence is perceived on the continent via cultural existence. This has been achieved by promoting historical and religious ideals and opening Turkish schools in many African countries. Besides the large number of Turkish schools, the Yunus Emre Institute can be considered the leading Turkish cultural foundation promoting Turkish culture and art outside of Turkey. Fourth, Ankara seeks to increase its presence in Africa via aid by extending humanitarian and development assistance to the people. Turkey, an emerging middle power, has assumed a growing role in the humanitarian field for the last decade, introducing new methods of humanitarian activism, particularly in Africa. Humanitarian diplomacy has been a soft power tool that Turkey had employed to win many hearts and minds as an emerging international donor.

In 2017, the Global Humanitarian Assistance Report ranked Turkey the world's second largest humanitarian donor after the U.S. and the world's most generous nation compared to its gross national income. In doing so, Ankara has devoted 0.75 percent of its gross national income (GNI) for humanitarian assistance and donated more than one fifth of the total $27.3 billion humanitarian aid in the previous year. One sub-Saharan African country that hugely benefited from Turkey's generosity is the war-torn Horn of African nation was Somalia. In 2011, then Prime Minister Erdoğan along with cabinet members, family members, humanitarian organizations and business representatives visited Mogadishu, the Somali capital, to help prevent the famine and alleviate the suffering of the people. Erdoğan is the first non-African head of state to visit the nation in the last two decades. Since then, Turkey has assisted Somalia in almost every aspect and contributed to the state building process. Ankara now maintains its largest embassy in Somalia and expects to inaugurate its second overseas military facility in Mogadishu soon.

The facility, which is already operational and providing training to the Somali Army, will help Somali forces restore security in the country and contribute to security and stability in the region. Turkish involvement in Somalia is a reciprocal process. On one hand, it's effective and beneficial for Somalia to rise from the ashes. On the other hand, it serves Turkey's interests in Africa as President Erdoğan said, "Somalia has become a symbol of the relations we wish to establish with our brothers in Africa." Ankara now maintains a military base in Somalia. Needless to say, Africa has vast natural resources, a young and vibrant population and an entrepreneurial spirit that could turn the continent around.

Although Turkey had Ottoman era historical and cultural relations with Africa, its involvement on the continent started in the 1990s and gained momentum when AK Party rule began in the early 2000s. Since then, Turkey has won observer status in the African Union and is recognized as a strategic partner and one of most significant actors in Africa. Turkey became a non-regional member at the African Development Bank, as well as successfully organizing three Turkey-Africa business and economic summits - first, the Turkish-Africa economic summit in Istanbul in 2008; second, the Turkish-African cooperation summit in Malabo, Equatorial Guinea, in 2014; and third, the first Turkey-Africa Agriculture Ministerial Meeting and Agribusiness Forum in Antalya in 2017. Finally, the gradual increasing trade between Ankara and its African counterparts coupled with Turkey's military re-engagement on the continent add another layer, which will take bilateral cooperation to new heights. In this context, one can conclude that Turkish engagement policy in Africa is effective and fruitful, paving the way for a new era in bilateral relations between Africa and Turkey.