Is Barzani the Kurds' national hero or an impenitent loser? 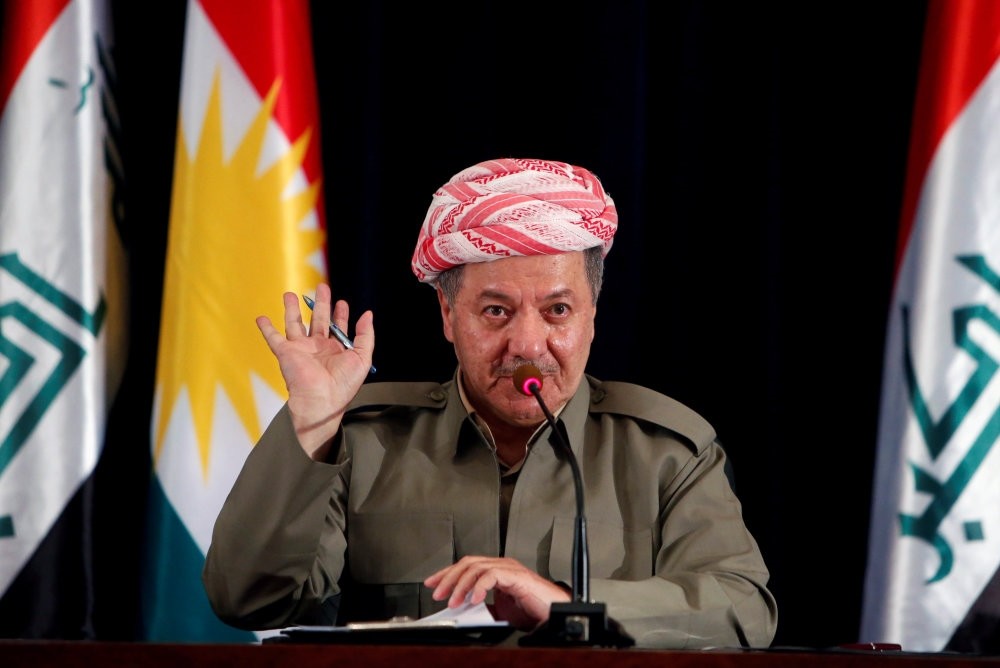 Due to his insistence on holding the referendum despite harsh objections by his traditional allies, Barzani is about to lose all of his gains in the region

Immediately after the de facto president of the Iraqi Kurdistan Regional Government (KRG) Masoud Barzani announced the date for the independence referendum on June 7, the political landscape of the region turned even more clamorous based on its avowed unconstitutional character.

First of all, various Kurdish factions debated the decree for the referendum because Barzani issued an executive order after his term had expired last August without rival factions in the parliament reaching an agreement to extend his term. Since the extension of his tenure in 2015, political uncertainty also brought about economic, social and administrative instability in Iraqi Kurdistan.

Secondly, and even more significant, according to one non-Kurdish point of view, the referendum had an obvious illegal character due to the fact that Article 1 of the federal Iraqi Constitution articulates clearly the notion of the unity of Iraq.

In other words, fundamental principles of the constitution envision the type of government to be "a single, federal, independent and fully sovereign state in which the system of government is republican, representative, parliamentary and democratic and this constitution is a guarantor of the unity of Iraq."

Again, Barzani scheduled an independence referendum following Daesh militants' occupation of Mosul in 2014. Nevertheless, he had to put aside the referendum immediately when Daesh terrorists made a strong move toward Irbil, the capital of the KRG. In fact, the Kurdistan Democratic Party (KDP) peshmerga forces were saved by the U.S. air force, so the KRG leader announced the cancelation of the referendum in return of the U.S. favor to rescue his party's peshmerga.

It is clear that Barzani organized an identical independence referendum to be a hero for Kurds in the Middle East. In the run-up to the vote he had declared, "We may die for our goal." In a way, he is imitating his father, Molla Mustafa Barzani, who is acknowledged as a Kurdish national hero.

On his way to squaring the circle to be known as a Kurdish national hero, whether or not he would be successful was one of the most debated issues before the referendum. To speak frankly, the date to hold the referendum was ill-timed in terms of widespread instability and political turmoil both in the Kurdistan region and Middle East as a whole for one, and Barzani is about to turn the crisis into an irretrievable opportunity because based on his previous explanations it would have been done through negotiations with Baghdad.

However, this did not pan out and Barzani lost his opportunity on his way to an independent Kurdistan. He closed dialogue channels with Kurdish factions and Baghdad. As can be remembered, after a two year of break, the KRG parliament reconvened in Irbil and approved to hold an independence referendum amid the absence of remarkable numbers of lawmakers from the KDP, the Kurdistan Islamic Union (KIU) and part of the Patriotic Union of Kurdistan (PUK).

In addition, the U.S., U.K., EU and neighboring countries such as Turkey and Iran voiced strong objections to the referendum. Even though the countries that raised their voices against independence have different security and regional concerns, their common ground is a strong belief in keeping Iraq unified and completely annihilating the Daesh.

Another point worth stressing is the newly emerging social dynamics of Iraqi society that have been reshaping immediately after Daesh emerged. These posed a major obstacle to the referendum and its aftermath. The socio-economic and political landscape of the region is not the same as in 2005.

Political leaders have changed and state-like local, regional and transnational paramilitary groups have been formed and spread throughout the region such as Daesh, Jabhat Fatah al-Sham (previously known as Tahrir al-Sham) and various minor jihadist groups as well as Hashd al-Shaabi. The current political landscape has given rise to a multi-actor complexity resulting from the consequences of the Arab Spring.

Moreover, even before the Arab Spring, all communities in Iraq were looking at each other in doubt. Trust was completely broken between Kurds and Arabs, Christians and Muslims and Yazidis and Muslims. Therefore, before a referendum for independence the priority for political leaders should be to come up with practicable solutions to get those communities to trust one another again.

Today, Iraqi Kurdistan is sheltering 1.8 million Syrian refugees and internally displaced people from Iraq. This has put enormous pressure on public services, the economy, society and security, but there is no channel for dialogue among Kurdish political parties to establish a reconstruction program specifically after Daesh is defeated. One of the biggest challenges that should have been dealt with is internal disengagement within Iraqi Kurdistan and wider Iraq before holding an independence referendum.

According to the referendum results, Barzani is about to turn into a so-called Kurdish hero, with approximately a 72 percent turnout, 93 percent voted in favor of independence, but he also turned into an impenitent loser and is finished in the eyes of the international community, losing all the socio-economic achievements gained between his neighboring countries such as Turkey and Iran.

President Recep Tayyip Erdoğan said that "irrespective of the results, we see this referendum as null and void and it is illegitimate." He also said, "Turkey is ready to take all steps needed on political, economic, trade and security fronts." Iran has stopped flights to Iraqi Kurdistan and the Revolutionary Guards launched a military exercise in its northwestern Kurdistan province as intimidation to both its own Kurdish population and the KRG.

Hanging precariously on the verge of a political cliff, the outcome of the independence referendum has ultimately redrawn the socio-political and economic landscape of the region as a whole. The election results will not give Barzani another two-year term in office, and he had previously promised not to be a candidate in upcoming elections in 2018 anyway. One thing is for sure. Other than Daesh being a destabilizing terrorist entity, the KRG has now evolved into one of the most destabilizing political entities in the region. In the coming days, the political landscape will be shaped according to the cooperative, strategic maneuvers that Turkey and Iran make.