What we really know about the Myanmar case 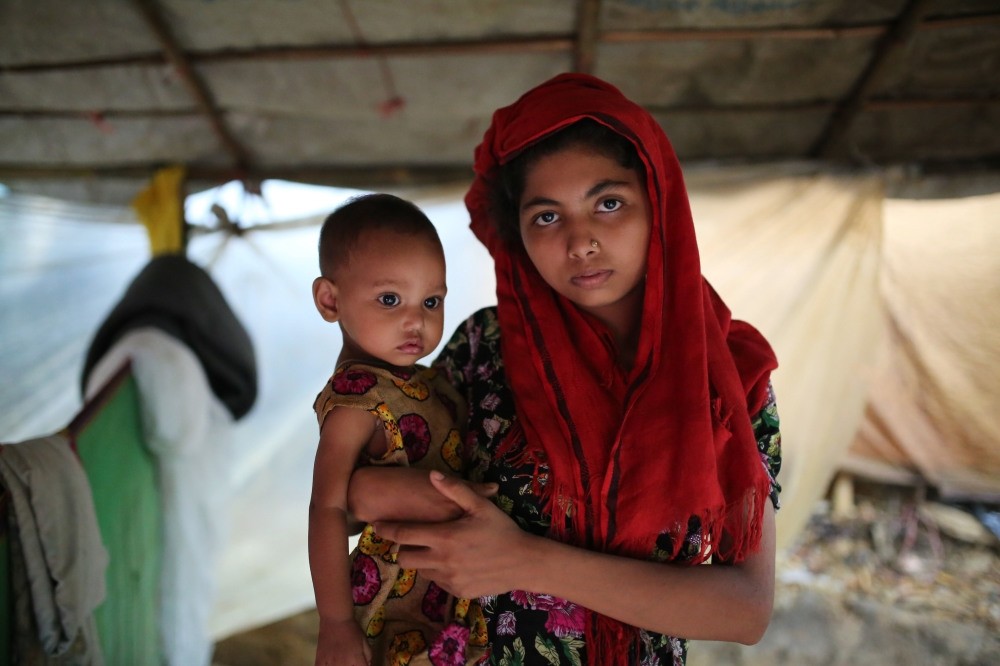 A Rohingya woman holds her child and stands for a photograph at a makeshift camp near the Kutupalong refugee camp in Cox's Bazar, Bangladesh, Oct. 3.
by Musap Eryiğit Oct 06, 2017 12:00 am

The Advisory Commission on Rakhine state, formerly known as Arakan, established by the government of Myanmar and the Kofi Annan Foundation, submitted a final report last Aug. 23. A couple of hours following the submission of the report, which recognizes the human rights abuses of the Muslim community there and says that the Rohingya compose the most persecuted community in the world, an armed attack occurred against the border guard police and military personnel by a armed Muslim group called the Arakan Rohingya Salvation Army.

Following the attack that claimed 12 Myanmar soldiers' lives, the Myanmar military started security operations in the region. Local Muslims were forced to leave their houses on the accusation of helping armed militants. Images from the Rohingya villages later showed that the houses and all other belongings were attacked, looted and set on fire by radical Buddhists and the military.

According to the U.N.'s latest announcement since the beginning of the clashes, more than 1,000 people have been killed and more than 400,000 Rohingya have crossed the border to seek refuge in Bangladesh. U.N. Secretary-General Antonio Guterres said that ethnic cleansing of Rohingya is taking place in Myanmar and called on the government to cease security operations immediately. The World Food Program also announced that they have not been able to reach some parts of northern Rakhine state since July, leaving some 250,000 people without regular food assistance.

Since the heart-breaking news and images went viral on social media through international media coverage, the Myanmar government has received condemnation from almost all parts of the international community. However, it refused the condemnations and attempted to cover the horrible events taking place. Although the government's presidential spokesman accepted that since Aug. 25, some 176 villages were fully and 34 villages partially evacuated, adding that those who left the country will only be allowed to come back if they have the proper documents with them. The Nobel Peace Prize-winning leader of the country, Aung San Suu Kyi, was condemned heavily following her remarks in which she called the horrible events taking place fake. The anger against Suu Kyi was so tense that an online campaign calling for the rescinding of her peace prize received almost half a million signature from around the world.

The clashes that have been taking place in Rakhine were not unexpected or surprising for those who follow the developments in the country. The 2012 and 2016, clashes that left hundreds dead and thousands internally displaced are indeed still a fresh memory. However, those clashes did not attract this much attention from around the world and international media coverage was much less. The heavy condemnation of Suu Kyi, who once used to be seen as a close friend, is also worth being analyzed.

European Parliament convened in Strasbourg on Aug. 11, and first turned a blind eye to the events in Myanmar while observing a minute silence for those killed in the terrorist attacks in Spain and Finland. The parliament discussed the issue on the last day session together with the crises in Cambodia, Gabon and Laos. The parliament later took another step and canceled a planned visit to Myanmar. The statement put on the parliament's website said: "In the light of the recent developments in Myanmar, the EP Committee on International Trade has decided to postpone its visit in the country. … It is clear that under these conditions, the ratification of an investment agreement with Myanmar is not possible."

Those who think the humanitarian reasons are the key factors for the change, the Western approach to Suu Kyi may be too naïve. Being one of the basic theories of international relations, realism says that states are rational and attempt to maximize their interest in order to survive in the chaotic international order. In the case of the Rohingya crisis, though, the Western world could be attempting to damage the stability in Southeast Asia in order to manipulate the rising Chinese influence in the region.

In recent years, China and Myanmar have been deepening cooperation in several areas under the rule of Suu Kyi. Since 1988, Beijing invested $20 billion in Myanmar. This composes 30 percent of total foreign direct investment that the country has received so far. A Chinese-led consortium also creating a $10 billion special economic zone in Kyawkpyuh, which includes a port that will be operating as an oil and gas terminal. Through the port, oil coming from the Middle East and Africa will be transported to China's Yunnan province directly through the pipeline, creating an alternative route to Malaysia's Malakka Straits, which is mainly controlled by the U.S. Once the Myanmar-China pipeline becomes fully operative, huge Western logistics companies that carry the oil for China will be losing money.

That is why instability in Southeast Asia is the main threat to China's One Belt One Road project, which aims to reconnect Asia and Europe through new railway and sea routes that promote bilateral trade.

On the regional level, the rising India-led Hindu-Buddhist trend contributes to the crisis in Myanmar. Especially since Indian Prime Minister Narendra Modi came to power, Hindu nationalism is on the rise against long-lasting enemy Pakistan. The trouble India has with Pakistan in Kashmir push the country to be the leader of the anti-Muslim camp in Southeast and South Asia. As long as India maintains Islamophobic polices, relatively small actors in the region such as Myanmar and Sri Lanka will have to face domestic unrest between different social communities.

The commission, composed of six Myanmar and three international members, headed by former U.N. Secretary-General Annan, mandated to examine complex challenges in Rakhine state and to propose responses to those challenges. At the end of the mandate in late August, the commission submitted its final report, "Towards a Peaceful, Fair and Prosperous Future for The People of Rakhine," to the Myanmar government. Unfortunately the report, which contains important findings and recommendations, was overshadowed by an armed attack on security forces only a few hours after it was submitted. Yet the commission and the report had the potential to challenge hundreds of years' old taboos among the different parts of Myanmar society.

On the request of State Councilor Suu Kyi, the commission started its mission in September 2016. Suu Kyi herself mandated the commission and asked them to be bold on their recommendations regarding the challenges in Rakhine.

On Aug. 23, Annan submitted the 63-page final report to Suu Kyi. The report indicates that the challenges in Rakhine have two sources. According to the reports, the disagreement on power sharing between local Buddhists and central government constitutes the first source while the communal problem between Muslims and Buddhists constitutes the second. These challenges push the state to face development, human rights and security crises.

As clarified in the report, Rakhine is separated from the rest of Myanmar by a chain of high mountains and was a home to its own kingdom for hundreds of years. The state came into Burmese control in 1784, and only after 40 years, in 1824, British India gained control of the area. Following the independence of Myanmar in 1948, Arakan has become part of the country.

According to the report, Buddhist groups composed the majority of the area since ancient times. However, relatively small Muslim groups also existed even before the British control. Yet the Muslim population doubled when the British government brought Muslims from Bengal in order to meet the manpower needs to increase rice production. That was the beginning of the troublesome relations between Buddhist, who started to worry about becoming a minority and Muslims who settled and started a new life in Rakhine.

The report says that Muslims living in Rakhine who call themselves Rohingya now constitute one-third of the population in Rakhine state. Buddhist groups, together with the central government, oppose granting citizenship to these Muslims, claiming they are not locals, but Bengali.

According to the Annan report, a number of the slightly more than 1 million Rohingya living in Rakhine are stateless. They compose the most persecuted population in the world. They have been refused citizenship as they are not listed among official "135 Ethnic Races" of Myanmar. Yet this clearly contradicts international norms and agreements that Myanmar ratified. The Convention on the Rights of the Child, ratified by Myanmar, requires states to respect, protect and fulfill the right of every child to acquire a nationality.

Previous governments of Myanmar made some unsuccessful attempts to grant citizenship to the Rohingya. Regulations based on the 1982 Citizenship Law only allowed 4,000 of 1 million Muslim to be citizen. However, even after being granted citizenship, pressures on Rohingya who became citizens was maintained and they cannot fully enjoy their fundamental rights.

The Rohingya do not have freedom of movement. Those living in towns and villages can only move if authorities grant them permission. Those in internally displaced people's camps are not allowed to leave. Restrictions on freedom of movement prevent them from entering social life and alienate them from society.

In summary, the events taking place in Rakhine state are complicated and difficult to understand for those not familiar with the issue. In this respect the Annan report carries significant importance. The government of Myanmar could have pressure put on it in order to implement the recommendations by the commission, which has a national identity. Indeed, international condemnation and pressure have led to the first result and the government announced the establishment of a ministerial-level committee to implement the recommendations of the Annan report.

While thinking of this issue, one should keep in mind that Myanmar was ruled by a military junta for years and still contains military personnel in the government. Although Suu Kyi seems to be leading the country, it is not possible for her to implement reforms without the approval of the military. Rising Buddhist nationalism in Southeast Asia also blocks reform movements, and will continue to do so. Therefore, the fear of losing popularity among voters may prevent Suu Kyi from challenging the controversial issues in Rakhine.

The international community needs to strengthen its role and presence in Rakhine in order to form a pressure group to pave the way for reform and a peace process. The Turkish government and Turkish nongovernmental organizations that are eager to provide assistance to the Rohingya may follow the recommendations in the Annan report in order to maximize the benefits of the people living in the area. More than daily food assistance, Muslims living in Rakhine need to fully enjoy social and political rights, which will help them to be a legal part of the country.