Ankara's KRG move and what it means for Turkey's domestic politics 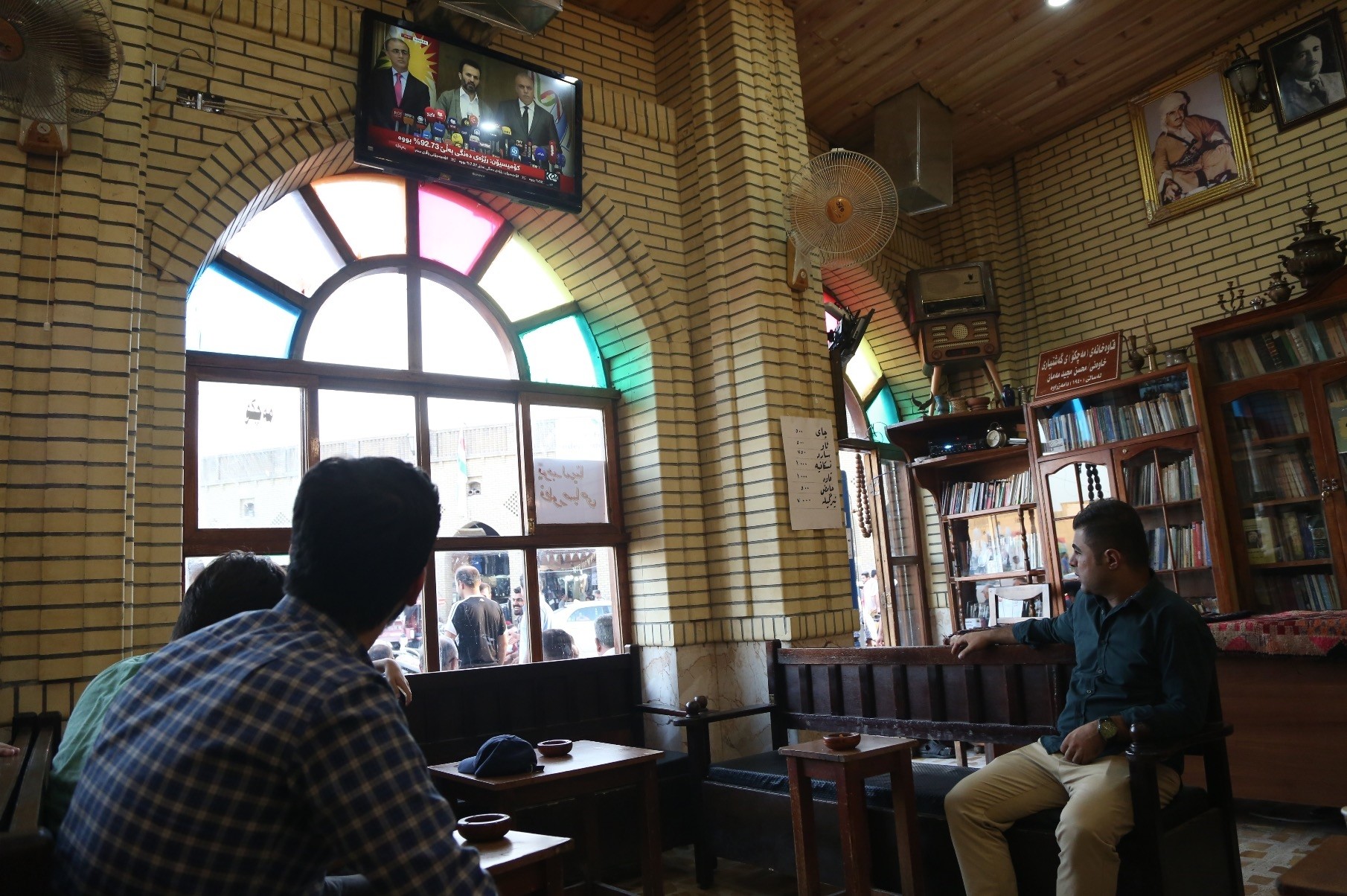 Kurdish people at a popular cafe in Irbil watch the press conference where the results of the KRG independence referendum are announced, Sept. 27.
by Mehmet Çelik
Oct 09, 2017 12:00 am

The Kurdish population in Turkey should not be abandoned during the process of dealing with the KRG, closing the doors on any possibility of exploiting the issue for a misperception that would claim the government's steps are against the Kurds in general

In the past four-to-five months, Turkey has diplomatically intervened with four crises, both in its immediate region and beyond, which all have, one way or another, effects on its internal political and social dynamics. These are Israel's aggressive policies against Palestinians, the Gulf crisis between Qatar and the Saudi-led axis, Rohingya Muslims' tragedy and, most recently, the Kurdistan Regional Government's (KRG) independence referendum, which is a recipe for disaster in the region, carried out under the pretext of "Kurdish nationalism" and the "rights of Kurds." One factor these issues have in common is, similar to many foreign policy steps, that they are simultaneously intertwined with domestic affairs.

The debates on how domestic political dynamics affect states' foreign policy design have long been discussed in political science and international relations. While the state can be seen as the sole actor in its interactions with the other states in political affairs, non-state actors, be it businesses or civil society, have also had relative affect power or foreign policy as well. Without digging into the theoretical aspects of the debates, let's go through these examples, and ultimately show why Turkey's moves in dealing with the KRG independence vote must be taken carefully, for both regional and domestic sensitivities.

The first one of these crises was the Israeli government's ban on al-Aqsa Mosque Compound in East Jerusalem, and consequent violence followed after clashes took place between the Palestinians and Israeli security forces. President Recep Tayyip Erdoğan intervened, as one of the most influential vocal critics from the Muslim world of Israel's policies against Palestinians, showing solidarity with and support to the Palestinians' cause and struggle against the occupying forces. Although the decades-long struggle is not solved overnight, Erdoğan's support and efforts for the Palestinian cause have been noteworthy in the international arena. The Palestinian struggle has always had support from the Turkish public and the Turkish public expects their political leadership to show sensitivity to the Palestinian struggle.

The second incident Turkey intervened recently in its region was the Gulf crisis, where Saudi-Arabia, Bahrain and the United Arab Emirates (UAE) imposed sanctions on Qatar, claiming that the latter has supported outlawed groups in the region. Turkey, discrediting the claims, showed solidarity with Qatar, while it also refrained from taking a harsh stance against the Saudi-led axis. While ensuring that Turkey's political and economic ties are not affected, and ultimately, damaged, Ankara carried out intense diplomatic traffic to minimize the consequences of the crisis in the region. By doing so, the Turkish government also ensured the country's internal economic interests were not put to a risky position. In addition, Turkey's leading role as a mediator also gave the public at home an assurance of the political leadership in the region, or in other words, bonus points among its electoral audiences.

Turkey's diplomatic efforts to bring the humanitarian tragedy against Rohingya Muslims committed by the Myanmar government was the third recent conflict Ankara intervened in as the voice of the oppressed. The condemnation of the Myanmar government's violent aggression against the Rohingya people, was included on the agenda of the international community after President Erdoğan spoke on the matter in his speech at the 72nd UN General Assembly in New York. Turkey's mission as the voice of the oppressed has always won favor in the people's eyes, and the governments historically have had public support. The most apparent and most recent example has been Turkey's support to the nearly 3 million Syrian refugees within its borders.

The KRG issue, similar to the crisis mentioned above, has both regional and domestic consequences. As Ankara rightfully argues, the establishment of a small state along its southern border, with two already failed states, Iraq and Syria, will add to the already heavy burden on its shoulder, be it a humanitarian issue, a security issue, or a political issue, while it deals with several terrorist groups simultaneously. In addition, the sensitivity of the issue is also related to Turkey's decades-long conflict with the PKK terrorist organization, and its separatist aims, which is argued that the KRG's independence goal, if realized, can further trigger the PKK's aims of separating from Turkey. The terrorist group's Syrian affiliate, the Democratic Union Party (PYD) and its armed wing, the People's Protection Units (YPG), has already been taking steps to establish an autonomous region in northern Syria, with the unfortunate support of Ankara's Western allies, both politically and militarily. As such, Turkey also sees the KRG's independence goals as a threat to its national security and ultimately a threat to its sovereignty.

Understandably, Ankara has taken a firm stance against KRG President Masoud Barzani's adventure and has called on Irbil to step back from the aim to establish a separate state along its 384-kilometer-long southern border. The Turkish government recently announced that it will intensify its measures, while entering an alliance with the Baghdad central government and Iran.

Here, a crucial point that the Turkish government should take into consideration, is the possible impact the KRG's actions might have on Turkey's Kurdish population.

While taking steps against the KRG, the Justice and Development Party (AK Party) government should calculate the long-term political affects on its Kurdish population, particularly ahead of the crucial 2019 elections.

The voters from the Kurdish-populated eastern and southeastern cities supported the "yes" pole in the April 16 referendum on constitutional amendments. This was, in a way, a stance against the PKK's aim to create a chaotic atmosphere, and they showed support to continuing political stability. However, it is no secret that the anti-terror operations since the halting of cease-fire in July 2015 have also exhausted the people of the region, both socially and economically. While the state has been dealing with a cleansing operation against the Gülenist Terror Group (FETÖ) from its institutions, security forces have been effectively carrying out operations against the PKK, and public order has been relatively established in southeastern cities, almost as much as back in the time of the reconciliation process, pre-July 2015. This is partly due to the government's success in its ability to communicate the reasons behind the terror operations, why they are carried out, and what it means for the state to ensure that the perception that the operations are against the Kurds in general is eliminated and people's minds are not confused with such misperceptions. Credit must be given where it is due: When it comes to giving rights and freedoms to Turkey's Kurdish population, the AK Party government has, thus far, been the most pro-Kurdish government in the history of the Republic. Moreover, there has been a clear line drawn between the Kurdish population and the PKK in state discourse, which has also translated into a change in perception in the eyes of the public against the Kurds in general.

Similar to the government's careful handling of internal politics on Turkey's Kurdish population, Ankara's policies against the KRG must also be handled in a sensitive manner, without leaving room for any misperception that would accuse the government of being against the Kurds, instead of the wrong policies of the KRG administration. Similar to the Kurds in Turkey, the AK Party government have also stood by the Kurds in Syria - even when Bashar Assad did not recognize them as citizens - and the Kurds of Iraq. In fact, as it is known very well, when Turkey had political disagreements with Baghdad and Tehran, in addition to Syria, the KRG government had close political, economic and cultural ties with Ankara. Here, the difficult task is that Ankara must communicate to the Kurds in general, and particularly to those in Turkey, that the steps taken against the KRG are not actions against the Kurds, but rather they are in fact for taken to achieve an atmosphere that would be more peaceful for Kurds' unity with other ethnicities in the region, which is a bleeding wound, be it Arabs or Turkmens. The government must bring the issue to a very local level in Turkey and ensure the steps against the KRG are not interpreted by the average person as steps against Kurds, to minimize the long-term political consequences on public order, and also the AK Party electorate ahead of the crucial 2019 elections, when a 50+1 percent majority is not preliminary to get in the presidential office. The new generation of the Kurds are more aware of the political dynamics and also enjoy order more than disorder, although "the-anti state" sentiment that was etched into minds as a result of the unfortunate policies in the 1990s, is still strong in the memory of the middle aged generation, despite having less overall influence in the region.

In addition, a more in-depth political analysis must be done to better understand what the people in the southeastern and eastern regions want and need to rebuild and maintain trust between the state and the Kurdish people in the region. Economic problems caused by security-related issues must be the first priority, while ensuring that a connection beyond just material economic terms is established with the people of the region, who have suffered from terror for the past several decades. Building new roads, constructing new housing will serve the basic needs of the people in the region, however, ensuring social cohesion and opening new channels for political communication are also needed to better understand the dynamics of the region, and ultimately how the KRG issue can be dealt with to minimize the negative effects on internal politics.

It is also worth mentioning that, the government has been receiving the support of the Nationalist Movement Party (MHP) in its foreign policy moves. Steps against the KRG have been no exception. While this strengthens the AK Party's hand against the other opposition parties in Parliament, it may also touch sensitive nerves for the AK Party's Kurdish voters in the southeast. A balance must be established between enjoying support from a nationalist party and ensuring that the Kurdish population is not excluded for longevity and the strength of the AK Party ahead of 2019 elections. In other words, the Kurdish population in Turkey should not be abandoned during the process of dealing with the KRG, closing the doors on any possibility of exploiting the issue for a misperception that would claim the government's steps are against the Kurds in general.

Once such a balance is established, the possibility of misperception against the government are prevented through effective political communication methods and tools, and the KRG issue is ultimately brought to a relatively calm level, it could be said that Ankara has overcome another issue in its region, which has both internal and international aspects, through its successful maneuvers.