What may come after the Catalan independence referendum? 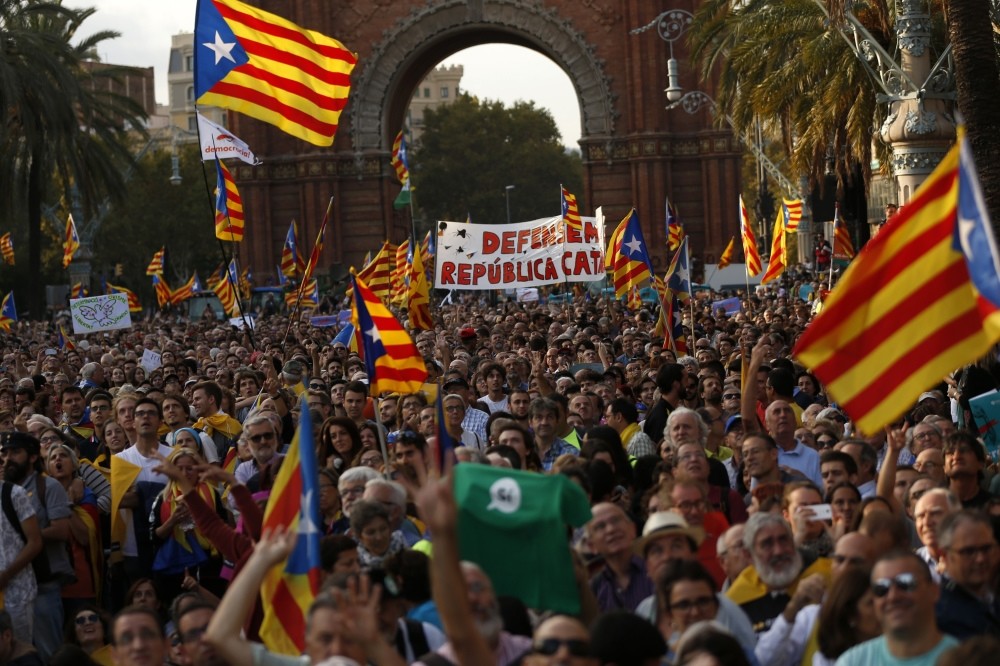 After Brexit, the EU may be about to face another crucial change in its borders because of the Catalan independence referendum held on Oct. 1, by which the separation of the autonomous Catalan region from Spain was approved by 92.01 percent of voters with a turnout of 43.03 percent. Pro-separatist members of the Catalan parliament state on Tuesday signed a declaration of independence defining Catalonia as independent and sovereign, a short time before Catalan President Carles Puigdemont's suspension of the declaration. Although the Catalan president stressed that there is a need to reach an agreed solution, the future of relations between the Spanish government and Catalan parliament is still full of ambiguity. Those involved in the process seem not to be going to be able to reach a consensus in the near future because of conflicting interests. Still, it is crucial to examine interests of various actors to understand what could come next in the process.

The roots of the conflict

As one of the most protracted conflicts in the world, the tension between Spain and Catalonia has escalated and de-escalated time to time. The conflict has arisen from not only political incentives, but also economic interests as Catalonia is one of the wealthiest and most highly industrialized regions in Spain. Even if Catalonia is an autonomous region and has the right to determine its policies on health, education and public order, the demand of full independence has come to the fore at various times. For instance, a self-determination referendum was held in 2014, in which 80.8 percent of voters supported full independence from Spain. Spanish Prime Minister Mariano Rajoy had said that any discussion or debate on Catalan independence was out of the question. By the rejection of the Spanish government and concerns of international organizations such as the U.N. and NATO, as well as the EU, the outcomes of this non-binding and illegal referendum were not implemented.

Despite not implementing the outcome of the 2014 referendum, the Catalan government proposed to hold a new independence referendum to the Catalan parliament, which was a stage of the Declaration of the Initiation of the Process of Independence of Catalonia held in 2015. This decision escalated tension between Spain and Catalonia once again. The Spanish government said that any possible decisions taken by the Catalan parliament would be deemed illegal. In relation to this attitude, Spanish police intervened to stop the referendum. Hundreds of people were injured as a result of this intervention and ambiguity in relations between the two sides arose again.

While Rajoy rejected any declaration of independence, he also said that they would not close any door to dialogue. Despite that the tensions had boiled over after the referendum, the possibility of negotiations functioned as a mitigating factor. Even Puigdemont, who said Catalonia had the right to become an independent state after the referendum, changed his approach in a short time and suspended the declaration of independence. However, because of changing interests within Spanish and Catalan circles, there are different scenarios regarding the future of Spain.

The statements from Rajoy stressing the probability of taking the measure of suspending Catalonia's autonomous status if the demand of independence escalates is one of the probabilities in future relations between Spain and Catalonia. Even if some moderate groups within Spanish and Catalan circles behave discreetly to avoid taking extreme decisions, more radical groups on both sides demand serious actions. Albert Rivera, the leader of the Citizens Party in Spanish parliament, has been asking for the application of Article 155 of the constitution, which would allow suspension of Catalonia's autonomy. In Catalonia, the far-left separatist Catalan Popular Unity Candidacy (CUP) does not accept any compromise regarding independence. Thus, although moderate groups try to reconcile the Spanish and Catalan sides, more radical groups on both sides seem to be bothered by possible reconciliation.

Additionally, both the Spanish and Catalan sides try to maximize their interests to remain ahead of the game. Xavier Palacios, a political analyst from Barcelona, has pointed to this policy and said: "The Catalan president's decision to suspend the declaration of independence signed in the Catalan parliament is about legitimizing his position regarding possible negotiation vis-a-vis the Spanish government. It was a direct message to the Spanish government to negotiate a re-arrangement of the status of Catalonia in the Spanish constitution." As Palacious claims, both sides are ready to take further steps to take advantage of the ongoing situation.

Especially on the Spanish side, some other options, such as sending the military to Catalonia and cancelling Catalan elections are broadly being discussed to retain authority.It should be taken into consideration that the frustration of one of these sides may result in collective anger and it has the risk of turning into ethnocentrism. However, different resolution mechanisms may come to the stage to decrease tensions. Intervention of third parties or effective leadership may be helpful to provide peaceful stabilization between two sides. A third eye in the form of a country, international organization or nongovernmental organization could take a part to enhance relations between Spain and Catalonia as happened during peace talks between the Spanish government and the Basque region. One of the most circulated options for a third party is the European Union, of which Spain has been a member since 1986. The first statements coming from the EU about the issue advise looking for a solution without the use of force and establishing negotiation channels. Maybe, the EU will be the accelerator of establishment of negotiation channels for a resolution in the coming days.