Trump's crippled diplomacy: Where is the U.S. heading? 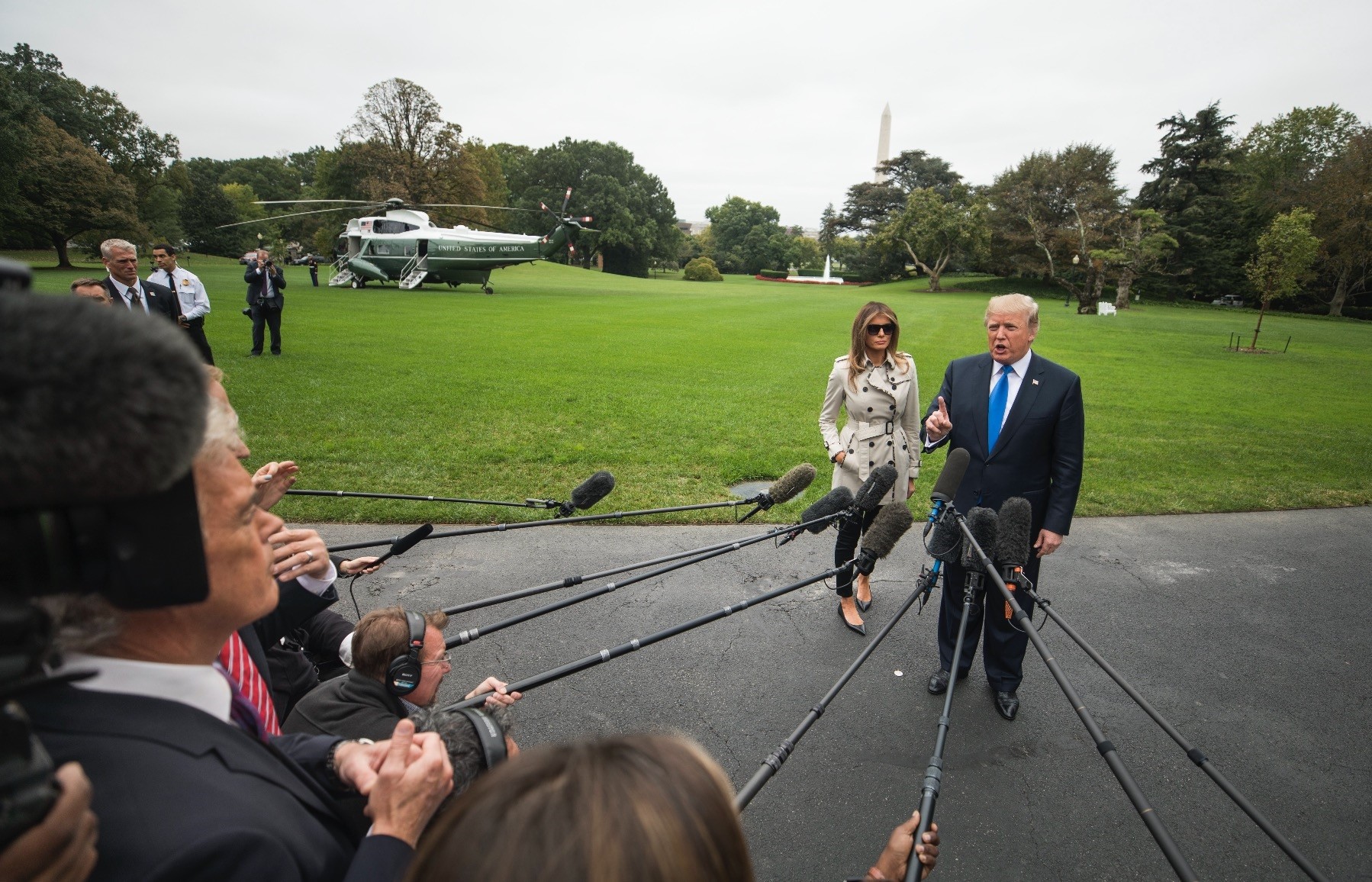 Trump answers reporter's questions about his decision to withdraw presidential certification of the Iran nuclear deal and about his moves to dismantle the Obamacare
by Merve Çalhan Oct 21, 2017 12:00 am

Trump's refusal to certify the Iranian nuclear agreement is not the courage of his aggressive foreign policy, but rather leaves behind the diplomatic language in international affairs which is detrimental to the U.S

Based on the approved terms of the Joint Comprehensive Plan of Action (JCPOA), which was signed in July 2015 and entered into force in January, Iran has guaranteed that its nuclear program will be confined to peaceful terms for the next 15 years. In the agreement, Iran agreed to large-scale restrictions on its nuclear agenda and intensive inspections to justify reducing its low enriched uranium stockpile, dismantling centrifuges and disabling the core of the nuclear reactor in the Arak Nuclear Complex. The agreement has countless opportunities to unrein Iran's pro-longed crippled economy badly affected by sanctions and incentivize Iran to sell more oil to resume control of roughly $100 billion of frozen assets. The United States, the European Union and the United Nations have lifted sanctions after the International Atomic Energy Agency (IAEA) announced that Iran complies with the articles of the agreement.

Since the accord took effect in 2015, Iran has been able to meet the nuclear-related commitments and preliminary criteria. In addition, according to IAEA Reports, Iran upheld its obligations in compliance with the JCPOA's requirements. Meanwhile, having been negotiated with Iran over two years regarding nuclear restrictions, monitoring and verification and sanctions relief, the nuclear agreement marks as a success of former U.S. President Barack Obama's administration to hinder the menacing discourse and activities of Iran, which caused the ratcheting up of tensions in the region. However, the political rift embedded in the modern U.S.-Iran relationship stretches back to the days when Iranian students seized the U.S. Embassy and took 52 diplomats hostage for more than a year in 1979. In fact, U.S. Secretary of State Rex Tillerson turned the clock back and brought up old memories during a meeting of P5+1 countries in late September at the United Nations Headquarters. Based on his highlights, even though the nuclear deal has opened a new page in U.S.-Iran relations, he still held up the argument that the relationship between the U.S. and Iran is shaped by asymmetric conflict dynamics.

It is crystal clear that the inauguration of Donald Trump as U.S. president symbolizes a new era both for the internal and external dynamics of U.S. politics. More than that, it symbolizes more than a new, but rather an unpredictable era in the U.S.'s foreign relations records. Since Trump took office on Jan. 20, 2017, circulation of core staff and senior officials has been out of the ordinary. The number of resignations and removals from the State Department has been obtrusive. According to former state department officials, more than 300 career diplomats have left and others have resigned from their posts. Trump's rapidly disappearing team is a sign of his self-aggrandizing character and undiplomatic erratic behaviors by stoking racial hatred – some call it "Twitter diplomacy." Of course, Iran also got its share of his neurotic character as a sworn enemy of the U.S. and Israel in the Middle East. Trump has already chewed up the Iran nuclear deal and even called it "the worst deal ever."

Following intensive inspections by the IAEA, the agency confirmed that Iran is meeting the obligations of the nuclear deal and therefore, European Union countries and the P5+1 (except the U.S. administration) feel rather at ease concerning the deal. Nevertheless, Trump refused to recertify Iran's compliance on Oct. 15 after its certification twice before. Trump's move pushed the issue to Congress, but there are precise signs to improve the situation. In fact, Tillerson and U.S. ambassador to the U.N Nikki Haley are now on the same page in order to avoid another crisis such as the one with North Korea. Even though Trump is asserting Iran is violating the nuclear agreement, it seems that his core team does not let him make a mess of the promising nuclear deal or break up the fledgling relations with Iran.

Iran's proxies as a safety valve

As far as Trump is concerned, Iran is still pumping sporadic conflicts through the region and appealing to quasi-conventional warfare by the means of its proxies in Yemen, Iraq, Syria and Lebanon. Iran cannot produce a nuclear bomb under the nuclear agreement. The Revolutionary Guard has increasingly utilized its proxies as a safety valve in its expansionist agenda. It is obvious that Iran is heavily investing in both militarily and financially Shiite proxies in the region. Those investments by Iran are damaging the ongoing, delicate balance among various parties acting in the region. As long as Iran insists on ballistic missile production and support of various terrorist groups that pose threats to Israel's security, some definite U.S. sanctions will remain in effect, such as the ban on U.S. aid, arms sales, dual-use exports and certain programs for Iran.

Crisis of confidence is approaching

Trump's refusal to certify the agreement is not the courage of his aggressive foreign policy, it rather leaves the diplomatic language in international affairs, which is detrimental to the U.S. image in the international community. The more Trump walks away from the cooperative feature of diplomacy in foreign relations, the more he ramps up military spending in the state budget. Apparently, he is now all alone with some generals and his core team where they are standing on a rather slippery floor in the White House. Currently, there are constant rumors circulating throughout U.S.-based media channels that Tillerson is about to leave his position. As long as Trump carries out his self-ordained attitudes, the allies and strategic partners of the U.S. will be dragged into a crisis of confidence at a great pace.