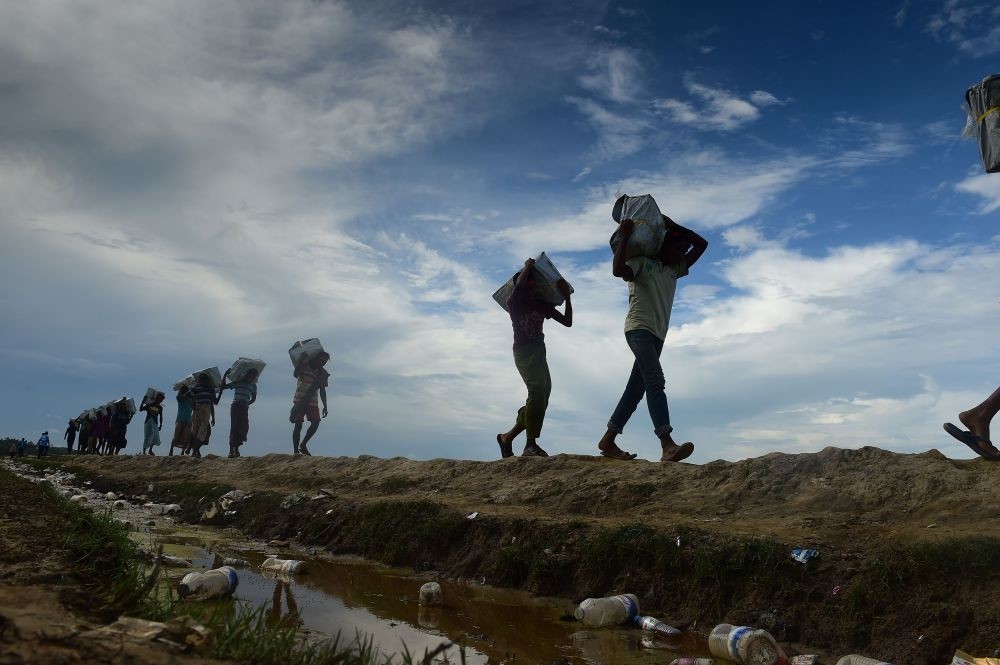 Bangladeshi workers carry relief supplies for Rohingya refugees in the Palongkhali area between Bangladesh and Myanmar, Oct. 18.
by Teoman Ertuğrul Tulun Oct 24, 2017 12:00 am

The full history of the Arakan coastal region of Myanmar has yet to be examined by an equitable historian. The region has most recently been engulfed in a fierce conflict resulting in bloodshed and suffering involving the Muslim Rohingya people of that region and the government of Myanmar.

The root of the conflict can be traced back to the issue of whether certain ethnic groups are indigenous to the region or not. The region has historically been referred to as Arakan. However, the Myanmar government formally calls the Arakan region as the Rakhine state and argues that all Muslims there are remnants of British colonial rule of these lands. Yet historical records establish that Muslims began to enter the region in significant numbers during the Kingdom of Mrauk U in the 15th century.

Another question that needs to be answered is who the Rohingya are. If one poses this question to the government of Myanmar or the Buddhist majority in the country, for them, there may be no such people as the Rohingya. In truth, there are people of two different faiths living in Arakan: Muslims and Buddhists. The hardest part is naming these groups. The Myanmar government refers to Muslims as "Chittagonians" or "Chittagonians Bengalis." This is done to delegitimize their claim for equal citizenship and to argue that these Muslims were brought from Bengal by the British to colonize the Arakan region. Despite limited usage of the term in the 19th century, the term Rohingya began to gain currency in the 20th century.

The Rohingya people are composed of four groups that migrated to Arakan between the 15th and 19th centuries. The most recent Muslim group to settle in the Arakan region came almost 100 years ago. They can hardly be referred to as newcomers and, consequently, this argument cannot be used to deny citizenship to the Rohingya. The second group in the region consists of Buddhists, who are referred to as Maghs or Arakanese.

The level of discrimination was furthered with the introduction of the color-coded "Citizens Scrutiny Cards" (CRC) system in 1989. According to the CRC system, pink cards were to be used by full citizens, blue cards by associate citizens and green by naturalized citizens. Most Rohingya were not issued any type of citizenship card. Only in 1995, after intense pressure from the U.N. High Commissioner for Refugees (UNHCR), Myanmar authorities started issuing Rohingya white Temporary Registration Cards.

This citizenship scheme, besides being inherently discriminatory in nature, has also practical effects on the Rohingya. One of these effects is travel restrictions. Due to their stateless status due to lack of citizenship, Rohingya are confined to their villages. They need to apply to the government for a travel visa to travel outside their villages. If for any reason they overstay the time allowed by their travel pass, they are punished by being expelled from the country.

Another discriminatory policy faced by the Rohingya population is the marriage authorization order. Since the late 1990s, Rohingya's in the Rakhine state have had to apply for permission before getting married.

The resounding victory of Aung San Suu Kyi and her National League for Democracy in the national elections in November 2015, was expected to usher in a new era for Myanmar. It did indeed bring new hope for the Buddhist majority in the country. However, for the Rohingya minority, nothing has really changed. In fact, Aung San Suu Kyi, before the national election, ordered a purge of all Muslim candidates in her party to appease the Buddhist majority.

The consequence of more than 70 years of segregation and discrimination by Myanmar state has had severe consequences. For several generations, Rohingya have been forced to live in economically deplorable conditions and without access to proper education. This has become the perfect breeding ground for extremism. Since 2013, terrorist organizations such as al-Qaida and Daesh have intensively targeted Rohingya for recruitment. This partly paid off in 2016, when in October, between 250 and 300 terrorist armed with knives and sticks attacked polices stations in the Arakan region, killing many Myanmar soldiers.

Myanmar is currently referred to as an information black hole. Thus, it is extremely difficult to get an exact figure on the number of civilian casualties in the conflict. Yet, satellite imagery shows burned down villages, and the refugees who have fled to Bangladesh recount stories of rape, mass murder and infanticide. Myanmar has been accused by the international community and the United Nations of committing one of the swiftest incidents of ethnic cleansing in the 21st century, some even claiming that these events constitute genocide.

What is even more worrying is that the conflict in Myanmar seems to have the potential to spill over to other countries such as Sri Lanka. Both Muslims and Buddhists in Sri Lanka have held counter demonstrations related to the events taking place in Arakan. Both religious groups seem to view the events taking place there not from a humanitarian perspective, but from a religious perspective.

Despite the lack of proper international response, countries such as Turkey have tried to respond to this tragedy appropriately. Turkey has asked Bangladesh to open its doors to Rohingya refugees, and in return, has offered to pay the expenses of the refugees. Turkey kept its promise and began to send food, clothing and medicine to refugee camps in Bangladesh.

No matter what century we live in, humanity seems to still be afflicted by the same plagues of past centuries. What we must understand is that unlike in the past, conflicts in one region can now quickly spread to other places. Today, a conflict in Rakhine state in Myanmar between Buddhists and Muslims may be a cause for conflict tomorrow in Sri Lanka or India. We should understand that simmering tensions and ongoing injustices might eventually breed extremism and armed conflict. This cannot simply be solved just by statements alone. Ignoring the plight of helpless people eventually has consequences for the peace, security and stability of the international community.