Lack of cooperation root cause of Middle Eastern crises 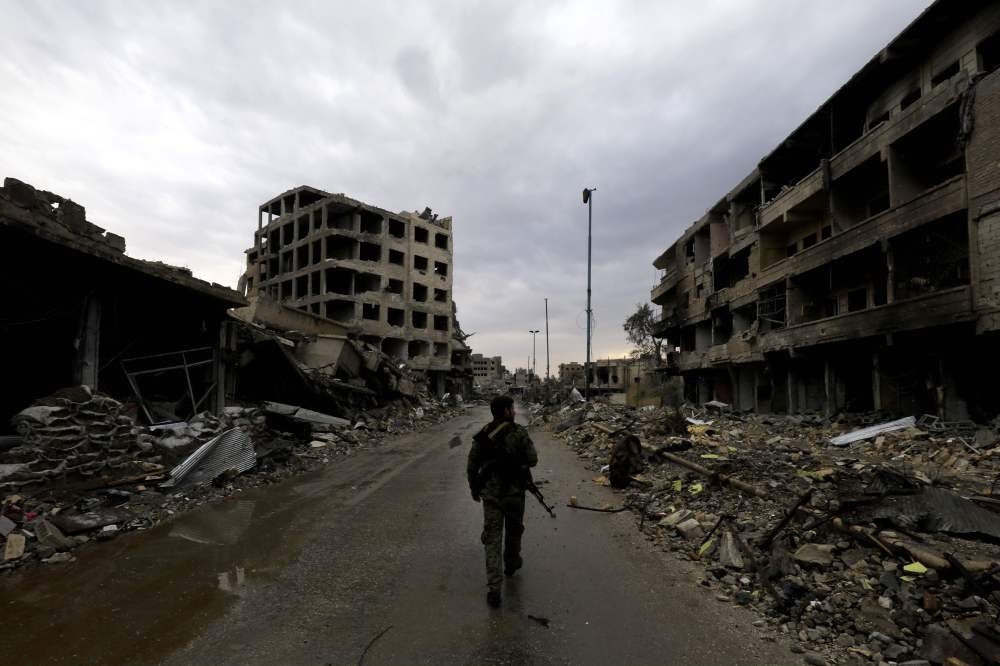 A SDF militant walks through a rubble-filled street surrounded by damaged buildings, Raqqa, Syria, Oct. 28.
by Mojtaba Barghandan
Nov 01, 2017 12:00 am

With Syria and Iraq still in flames along with the efforts to end or ease the crises through various tools of diplomacy and series of diplomatic negotiations, the Iraqi Kurdistan Regional Government's (KRG) independence referendum has created yet another tinderbox in the region in spite of the recent news on the suspension of the outcome of the referendum rather than its annulment, but the aim is other things than the bid itself.

This contribution is based on four main parameters. First, the term collective impact is coined to serve the non-profit world so that its application for the issues of global politics and international relations is open to criticism or argument. Yet, I have used the term to test its sensibility and responsiveness in case of the realization of enduring peace in the region. Second, there is always a sensitive interconnection between some regional countries' zigzag policies and the U.S. along with some Western states' covert plans. Third, there are concerns over the in-depth failure of regional countries in finding permanent solutions to crises through collaboration for long-lasting impact, and fourth, the regional Muslim countries' failure of pursuing collective impact may have no or less relation with the real nature of their diplomacy.

What is collective impact?

The term collective impact was first introduced in a 2011 article in the Stanford Social Innovation Review, authored by John Kania and Mark Kramer. They defined it as "the commitment of a group of important actors from different sectors to a common agenda for solving a specific social problem." However, in this text, I define it as a single and unified policy framework to tackle deeply entrenched and complex regional crises based on collaborative and structured approach to achieve significant and lasting changes. However, in the existing climate, collective impact is impossible. This, as a result, adds strength and power to the insatiable greed of the West and the United States to influence the region.

The illegitimate KRG independence referendum has already changed the balances in the region. Each steps taken or supported by the West and U.S. forms each of thousands of pieces of a highly complicated roadmap that directly affect the future of the region. It is a fresh start to crush and devastate the Middle East.

Under such a condition, the question arises regarding the willingness or unwillingness of regional countries to adopt collective impact to prevent the commencement of a new ruinous devastation, as their diplomacy initiatives and efforts seem to not have been able to provide the region with long-lasting stability in the past. Their diplomacy has merely temporarily fixed some obstacles and disputes. The rare security cooperation between Iran and Turkey and or joint military operation against common threats, for instance, is an example in this respect.

A very short review of recent regional developments through the following arguments would help to understand the main parameters.

Firstly, the referendum for KRG independence is a new struggle, which either facilitates the establishment of a "second Israel" in the heart of the region and/or provides new grounds for the new policies of the West and U.S. in the region. This would both pose large obstacles to diplomatic solutions to the ongoing conflicts and, ultimately, results in the emergence of new non-state actor/s for waging war in new destinations, although the territorial defeat of terrorist groups such as Daesh seems unlikely to resolve conflicts in the region. As past experiences indicate, the rise and fall of terrorist groups has always been part of a larger set of conflicts and interests.

Secondly, as long as regional countries insist on finding solutions to regional issues through the needs and necessities of their domestic policies based on a win-lose game rather than win-win approach, or exclusively through their concerns for their regional and/or international status, they will not succeed and there will be no chance to create collective impact. The words exchanged mutually between the leaders and officials from Iraq, Turkey and Iran since at least 2016 on regional issues are the best examples.

Thirdly, the Islamic world and the Middle East already suffer from a siege by the United States and the West. Just to remember, Americans voted for the populist idea to "Make America Great Again," and Donald Trump, now president, managed to capture a strategic minority vote to revive American supremacy over all others. It is just working, and in the package are the Qatar crisis followed by an artificially strategic rapprochement with Saudi Arabia and then the KRG independence referendum. On the other hand, Saudi Arabia's policies of the Trump administration have a relevancy and connection with Saudi King Salman's historic four-day visit to Moscow at a critical time, which has been described as a signal for a new era of cooperation with Russia.

These are parts of the U.S.'s long-term plan to water the seedlings of hostility and divisiveness. These approaches, in fact, herald shifts in both regional and global power structures. However, it might also be assessed as the Saudi regime's fear of the U.S.'s reliability, which has left the kingdom looking to diversify into wider set of alliances. The United States has played the Saudi and Israeli cards to test the stability of the existing balance. This is followed by two more issues: Trump's efforts to sink the international nuclear deal with Iran to give a green light to the Saudis and Israel, despite the EU being against the move, and the U.S.-Turkey visa standoff that has disrupted business and tourism.

Some big and bigger pictures are receivable from these sets of propositions. The big picture is that the West and the United States are trying to create a new space for easy maneuvering and to engage some of the major regional actors with new plays in the same puzzle. The bigger picture is that the more regional countries fail to reconcile and form compatibility, the more the crises prolong and intensify.In sum, new ruinous devastation awaits the region. The move has been imminent as part of the extended policies of the West and the United States' unsaturated greed. The Trump administration is in serious need of more security and war games in the region to create a new false atmosphere in America's foreign and domestic polices in support of its promises to "Make America Great Again."

The amazing side of the story is that despite the West and U.S.'s public and behind-the-scenes positions and agenda in terms of its historical sympathy with the Kurdish aspiration for independence, regional countries have not been able to act beforehand. They rather followed an approach of isolated impact, i.e., being reluctant to unite, the countries of the region become one of the chief propelling force for the United States and the West to easily maneuver throughout the region.

Middle Eastern countries are still a few steps further back from the West and U.S. and unable to find a long-lasting solution to the crises in their region. What we see today is the extension and traces of decades-long imposed policies on the Middle East. The current situation reminds us of the consequences of the 1916 Sykes-Picot Agreement, after which the crises in the region were being solved through artificial paths rather than passing a natural process by the systems of governments, as the systems were imposed on the regional countries and the selected powers relocated like pieces of a puzzle. This nature of power shift and transition is still common in the region. This situation makes an expected chance for the adoption of collective impact in the Middle East gloomy.