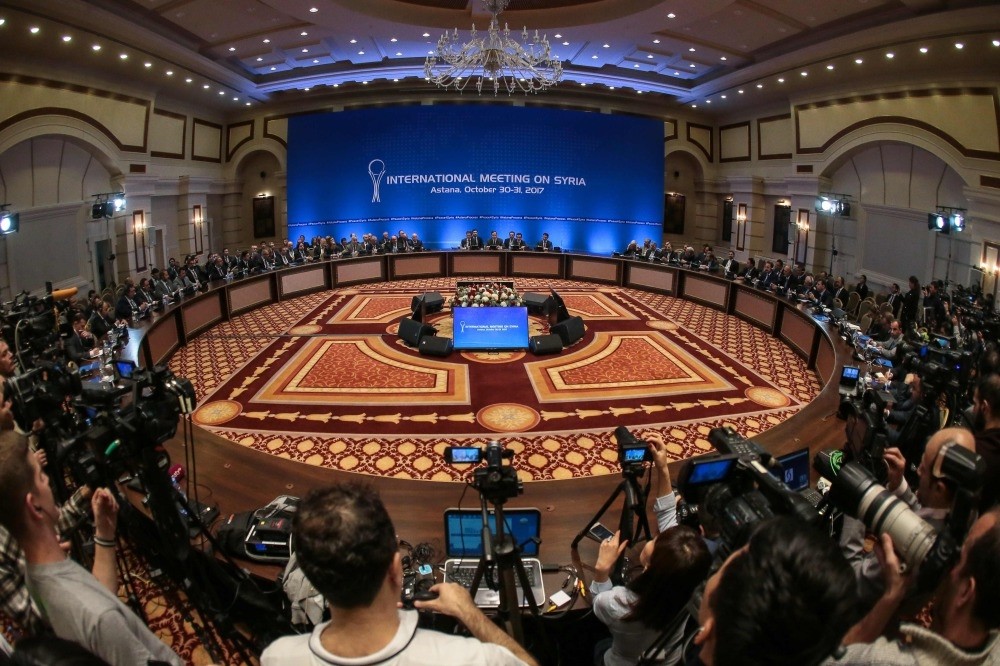 Ankara, Tehran and Moscow producing tangible results to resolve the Syrian civil war in Astana, particularly the de-escalation zone plan for Idlib, surpassed the negotiations in Geneva in effectiveness

During the long-lasting civil war in Syria, several international initiatives for a peace settlement came into being, and none of them except for the Astana process has produced a result-generating mechanism to eclipse in importance the UN-sponsored grandstanding in Geneva. The Geneva peace talks have revealed their impotence to end the Syrian conflict and have hardly eased the burden of war in the country largely left in ruins today with half a million people dead and half of the population displaced.

Designed as a complement to UN-backed negotiations in Geneva, the Astana process has taken a different tack from its very beginning. It came as a joint initiative of Russia and Iran, which support Bashar Assad's regime and Turkey, which backs the opposition. The tripartite initiative has managed to foster negotiations between the armed opposition with power on the ground and regime forces and focus them on the military issues. Ranked as military diplomacy, the effort bore fruit and the talks sponsored by Turkey, Russia and Iran brokered local deals to significantly reduce violence in the war-torn country. The Astana process swiftly "reanimated the UN peace talks kept on standby for nine months" as Russian Foreign Minister Sergei Lavrov said last July.

Widely recognized today as a result-generating mechanism, the Astana process has contributed value to the tangible results achieved in Syria. Four de-escalation zones in Deraa and al-Quneitra in the south of the country, in the opposition enclave of Eastern Ghouta near Damascus, in Homs province in the center and recently in the northwestern province of Idlib were established in line with the May 2017 Memorandum on De-escalation Zones in Syria to cover eight of its 14 provinces. The de-escalation zones "are conducted in the framework of the Astana talks with the participation of the three guarantor countries – Russia, Turkey and Iran – and assistance from U.S. and Jordanian observers and UN representatives," Lavrov said on Oct 12. Turkey, Russia and Iran are the guarantors and their goodwill and mutual understanding are the process's principal drivers.

Speaking on Oct 24, President Recep Tayyip Erdoğan told the press that Turkey is "in solidarity with Russia on Idlib" when it comes to de-escalation of violence in the province and that an operation to implement a de-escalation zone in Syria's northern Idlib province is "to a greater extent complete."

This development is crucial for the whole process of conflict de-escalation in Syria. Control over Idlib is split between moderate opposition groups supporting the Astana talks and the al-Qaeda-affiliated coalition of Hayat Tahrir al-Sham (HTS) rejecting the process and excluded from the talks.

In line with provisions on establishment of a de-escalation zone in Idlib, Turkish military units started their deployment to Idlib on Oct. 8 to build the required observation posts to conduct the monitoring. According to a statement released by the Turkish Armed Forces (TSK), deployed military units are due to carry out their duties through the rules of engagement agreed to by the guarantor countries. It mentions as well that the de-escalation zones guaranteed by Turkey, Russia and Iran through the Astana process aim to increase the effectiveness of the ceasefire agreement, end armed clashes, provide humanitarian aid to those in need, establish proper conditions for displaced people to return and support the establishment of conditions for a peaceful resolution to the conflict.

The operation in Idlib proceeds in close co-operation with the Russian military, which is responsible for protecting the borders of the city to avoid a potential intervention of a third party, while Turkish forces are in charge of internal security, making sure that the city does not harbor terrorist groups and no violence occurs there. This is a new example of the Turkish-Russian cooperative effort on the ground that has the potential to be extended to other operations if new de-escalation zones are agreed upon.

The TSK expedition launched on Oct. 8 also aims to contain the Afrin region controlled by the PKK Syrian affiliate Democratic Union Party's (PYD) and armed People's Protection Units (YPG). It is the second Turkish military incursion into Syria after Operation Euphrates Shield of 2016-2017 that resulted in the recapture of the cities Jarablus and al-Bab from the Daesh terrorist group, clearing more than 2,000 square kilometers in northern Syria of terrorists.

The seventh round of Astana talks

With developments on de-escalation zones in progress, the seventh round of peace talks in Astana was held on Oct. 30-31 with the participation of representatives of the three guarantor countries, the Assad regime, armed opposition groups, as well as of the UN, Jordan and the U.S. The event took place just days after Daesh was forced out of its de facto capital Raqqa in northern Syria by Syrian Democratic Forces (SDF) and on the eve of liberation of the city of Deir ez-Zor, long-held by Daesh.

The joint statement from Turkey, Russia and Iran on the international meeting on Syria in the last Astana talks recognized the progress achieved in the implementation of the memorandum to create de-escalation zones and a significant reduction of violence on the ground in Syria as a result of measures to strengthen and maintain the ceasefire regime, including launching the de-escalation and security zones. The adopted statement mentioned among other things, a "strong commitment to the sovereignty, independence, unity and territorial integrity of the Syrian Arab Republic" that its parties have reaffirmed. It also emphasized that no military solution to the Syrian war is possible and that it has to be solved through a political process.

The war in Syria is far from over, but the days of Daesh are numbered, at least on the battlefield. This has brought the issues of the release of hostages and prisoners, food and aid delivery to besieged areas, transfer of dead bodies and the search for missing people to the Oct. 30-31 meeting's agenda. The meeting looked into the issues, although no progress was achieved and no agreement was reached with regard to uninterrupted humanitarian access to regions under blockade or on the exchange of captives and prisoners. The lack of progress has made apparent the necessity of working out confidence-building measures to create better conditions for the political process and a lasting ceasefire.Speaking to journalists after the first day of the closed-door talks, Russia's chief negotiator Alexander Lavrentyev expressed confidence that a political settlement to the six-year conflict was possible. In 2015, Russia's military engagement in the war in Syria crucially changed its course in favor of the Assad regime. Today, with the war with Daesh nearing its end, Russia's role of diplomatic arbiter in the conflict becomes increasingly apparent. Russia announced its new initiative to end the Syrian conflict during the meeting in Astana. The meeting's joint statement in this regard says that the parties "agree to discuss in consistence with the UN-led Geneva process the Russian Federation`s proposal to convene a congress of national dialogue about which the Russian side shared information with the guarantors."

Russian President Vladimir Putin first announced Russia's initiative for a Congress of the Syrian Peoples at the Valdai Discussions Forum in October when he voiced "an idea to convene a congress of Syrian peoples with participation of all ethnic and religious groups, and the government and the opposition." He called it "an important step toward a political settlement that could also help drafting a new constitution for the country." Positive by its nature, the initiative immediately generated a mixed reaction from its potential participants as soon as the list of those invited was announced.

Ankara has expressed its considerable concerns, calling Russia's planned composition of participants "an imposition." "We immediately conveyed our reaction. It's unacceptable," presidential spokesman İbrahim Kalın told reporters on Nov. 1 in reference to an invitation extended to the PYD. The Turkish government has "no problem" with any invitation to Syrian Kurdish groups but sees as unacceptable the YPG and the PYD, he said.

Russia announced Nov. 18 as the date of the congress to take place in its Black Sea resort of Sochi, but had to put its arrangement on stand-by due to the generated conflicting reactions, although Ankara fully supports the initiative as feasible. According to Lavrov, the planned congress "will become the first attempt to start implementing UN Security Council Resolution 2254 requesting the international community to provide all possible assistance to the people of Syria in their building an inclusive inter-nations dialogue."