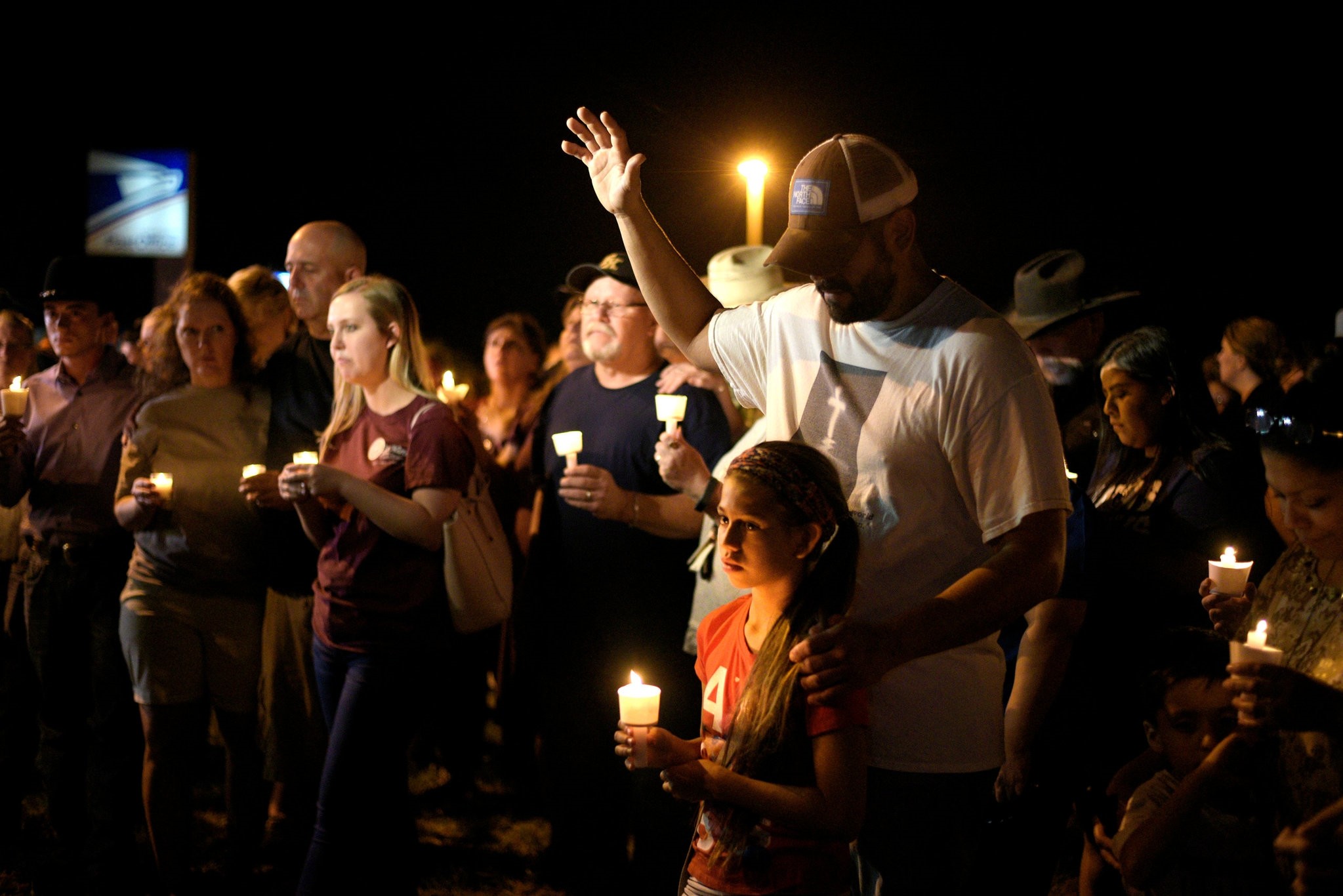 People attend a candle light vigil after a mass shooting at the First Baptist Church in Sutherland Springs, Texas, Nov. 5.
by Hatice Han Er Nov 13, 2017 12:00 am

On Nov. 5, there was a mass shooting at the First Baptists Church in the small town of Sutherland Springs in Texas, in which the perpetrator, identified as Devin Patrick Kelley, dressed in black tactical gear and armed with an assault rifle and two handguns, massacred 26 people and wounded more than 20 others. The tragic attack is considered as the deadliest attack in the history of the state of Texas. And once again, the world has turned to ask why the United States experiences so many mass shootings.

Although many reasons are put forward in answer to this question, one official fact is the astronomical number of guns that Americans have access to compared to the global population. According to a study at the University of Alabama, Americans perpetrated 31 percent of mass shootings between the years of 1966 and 2012. Another study analyzing gun-related crimes between 2000 and 2014 has shown that the U.S. had 133 mass shootings. This clearly illustrates the significant relation between a society's access to guns and mass shootings. However, before an analysis into the various other possible reasons, let us take a closer look at the crime of mass murder itself.Crimes are classified by their type, style and the number of victims. In regards to homicides, the number of victims determines the type of offence.

Mass murders are defined when a perpetrator kills more than three victims in one location in one incident. Mass murders can be in a private or public settings and can take minutes, hours or even days. The FBI subcategorizes mass murder as classic mass murder and family mass murder, and the prototypes of these crimes vary in certain ways. For example, an individual who fits the classic mass murder category is generally a person, who acts out against people, unleashing their hostility through shootings or stabbings at a public or private venue. While a family mass murderer is when a perpetrator kills four or more of their family members – and if the person takes their own life, too, then it will be considered a mass murder/suicide.

Why does a person commit such an appalling crime? What kind of a person would commit such an atrocious act of horror in a place of worship, at a school or work place? These are the first questions one raises as soon as news of a mass shooting takes place. An analysis of the victimology is the first step to take for the purposes of understanding the motive of the perpetrator. A question of who the selected victims were and how the crime was committed will give clues to the reasons, the identity and psychological processes of the mass murderer.

Generally speaking, mass murderers are white males, aged between their late 20s and mid-40s, are considered asocial loners in their communities, and are individuals who have had some significant turmoil in their personal lives. Furthermore, these individuals are generally people who have had military or special forces experiences or a fetish with guns or knives and, over a period of time, have been building anger against certain individuals or organizations, for a perceived wrong, either imaginary or real. The victims and the chosen location of the crime will be a specific target in which the mass murderer is familiar with and which has a connection to his own life and problems.

Let us analyze the perpetrator of the Texas church shooting. Devin Patrick Kelley, the identified mass shooter, was a white male aged 26 who had served at the Holloman Air Force Base in New Mexico from 2010 until his discharge in 2014. During his military service, Kelley was court-martialed in 2012 for an assault on his first wife and stepson. This led to Kelley being sentenced to a year of confinement and he was eventually discharged from the military on bad conduct in 2014. Although the assault was of a serious nature in which he choked his wife and fractured the skull of his stepson, the military failed to dishonorably discharge him from the military, which would have required the Pentagon to have notified the FBI in order to prevent him from buying or accessing any form of artillery in the future.

After being ousted from the military, Kelley, once again, comes to the attention of the criminal justice system in 2014 on an animal cruelty misdimeanour charge, for which he receives a mere slap on the wrist and is issued a fine. However, police officers also receive a domestic violence call in the same year at his home involving his girlfriend. No charges were filed at the time and two months later they get married. Kelley purchases a Ruger AR-556 rifle in April 2016.

The domestic violence evidently continues in his second marriage too as the massacre appears to have stemmed from a domestic situation. An analysis of Kelley's phone and family statements show that Kelley had been sending threatening text messages to his mother-in-law. The most recent threatening messages were sent on the morning of the massacre. Based on his brief brushes with the criminal justice system, we understand that the perpetrator of this mass shooting has a violent tendency toward people in his life. The build-up of anger is shown through the continuous messages, which is a common display of behavior with these types of criminals, as they feel more comfortable in written communications. However, once they reach a point where they feel that they are being ignored, they will take it upon themselves and prepare for their end game: The mass murder. And that is exactly what Kelley did on Sunday morning.

So why did Kelley choose this location? According to witness statements, Kelley's mother-in-law was a church-goer at this specific church where she volunteered. Although she had not gone to the church that morning, it is highly possible that Kelley would have assumed she would be there during the congregational prayers that morning. In his mind, as it is his end game, Kelley would have wanted to take what is important and precious in such a small and tight-knit town. He would want those who have angered him to pay for his own troubles. He would want to take what is precious to this community; the bond, the commitment, the relations that he believed was being taken away from his own personal domestic life.

Mass murderers do not expect or plan to come out alive from their final course of action. After making their statement, they will almost always turn the gun on themselves or force a confrontation with police forces, committing a suicide-by-cop. Dressed in black tactical gear, and armed with an assault rifle and two handguns, Kelley continuously shoots at the pews as he walks down the aisle and back up again. Police estimated that 450 rounds of ammunition were fired at the worshippers. Kelley's grandmother-in-law was also killed during the attack. After leaving the church, Kelley is encountered by a good Samaritan who tries to stop him. After a high-speed car chase, Kelley, who is already wounded by the shots by his pursuers, drives his car into a ditch. Police reports state that he calls his father on the phone and tells him he is wounded and will not survive. He the points the gun to himself. Autopsy reports confirm that Kelley died from a self-inflicted gunshot wound to the head.

According to the 2004-2009 FBI Strategic Plan, "the most significant threat that America faces is domestic terrorism." Lone terrorists may be considered amateurs, however, their attacks are just as destructive and what's more significant is the fact that their operational plannings are often difficult to detect as they socially isolate themselves and work on their own. In addition to this, although mass shootings can happen anywhere in the world, it seems to have become a matter of routine in the U.S. The main reason for this phenomenon corresponds with the number of high ownership of guns. Furthermore, apart from the lack of gun control policies by governments, media discourse on profiles of mass shooters, double standard labels and the use of the "mental health card" may also play a crucial role in the hindrance of these atrocities.Was Kelley a mentally ill lone wolf or a domestic terrorist? Media coverage in the U.S. on mass shootings or terrorism chooses to individualize or collectivize a crime depending on the skin color and faith of the perpetrator. Humanizing or dehumanizing the criminal based on their name and ethnic background and thus, the specific treatment of the massacre is "telling" of how the media chooses to label a criminal. Certainly, a perpetrator must be motivated by political or ideological beliefs in order for the act of crime to be labelled as an act of terrorism. Although, one ought to consider that acts of terrorism in this new era is evolving all around the world. However, it seems that the double standards of choosing to take the easy way out and consistently label "white Americans" as lone wolves, who have some mental health issues, will not only excuse them to some extent but hinder possible policy changes for gun violence.

What would happen to our societies if we continue to label criminals based on their backgrounds instead of looking at the main problems that allow them to commit such a horrendous act of criminality? The U.S. has a grave problem on its hands in regards to domestic terrorism, mass shootings and gun related crimes. The lack of gun control legislations will only continue to allow criminals like Kelley to choose the path of bloodshed and destruction when they cannot deal with a personal problem. Did Kelley have mental problems or was he just incapable of a healthy relationship? His criminal behavior during his past few years illustrates that he was just a ticking bomb waiting to explode. Perhaps a much more detailed analysis by forensic experts and the police can answer the question of his psychological processes but what is certain is that Devin Patrick Kelley terrorized a whole town with his actions.

* BA from La Trobe University, postgraduate degree in Education from RMIT University and an MA in Criminology and Criminal Justice from Griffith University