Can someone please hold Europe together, or is it too late? 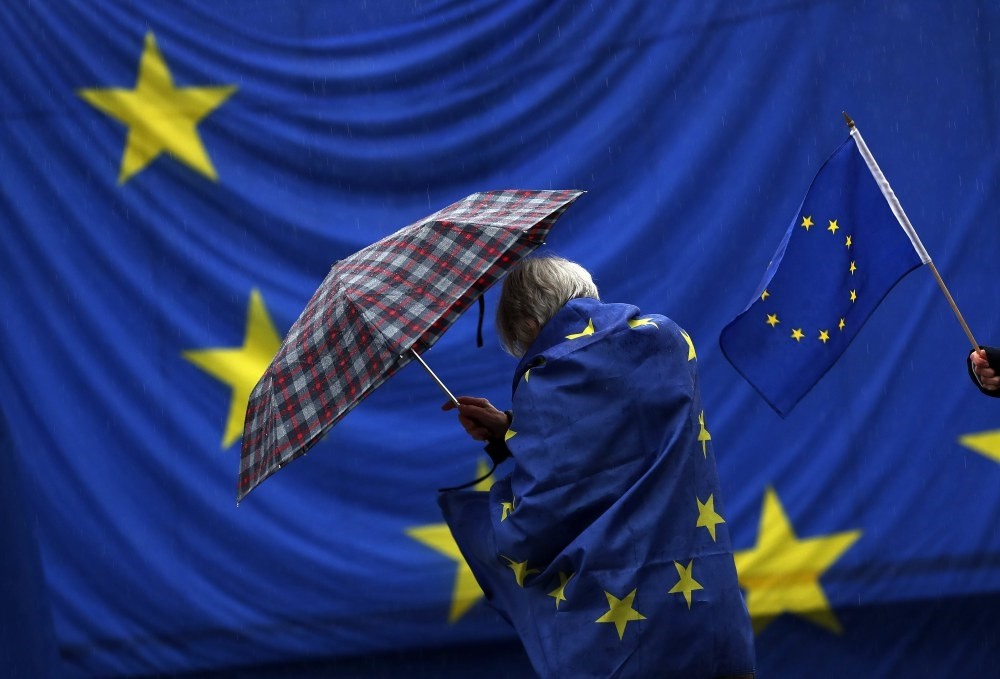 A participant wrapped in a European flag protects herself from the rain during the monthly pro-European Union rally titled, 'Pulse of Europe,' in Berlin, Germany, Nov. 25.
by Selim Atalay Dec 01, 2017 12:00 am

A specter is haunting Europe – the specter of separatism. All the powers of old Europe have entered into a holy alliance to exorcise this specter

Specters are scary, indefinable, obscure and self-serving. They are also hard to fight against. About 150 years after the "Communist Manifesto," the blueprint of the red menace, Europe is entangled with yet another menace – that of a specter of separation. Lands, provinces, countries want to secede. It is not just Catalonia. Scotland was a close call. After all, Brexit is a separation, albeit an extreme one.

Europe has a long list of wannabe independents. Some want autonomy, but legal terms should not blur the main theme that Europe does not quite hold nowadays.

Belgium, looks and sounds like a very artificial state. What is holding Belgium together? Flemish speakers and French speakers do not seem to be fond of each other. Flanders is itching for separation. Can anyone dare divide the land that hosts the NATO and EU headquarters? Those bodies were anchored in Brussels because Brussels is supposed to last forever.

Even another authoritative international body, the World Customs Organization (WCO), made Brussels home following NATO and the EU. Never mind if you have not heard of the WCO. It is very private, arguably a reserved and bashful organization with a constant dilemma of being stationed in the land of customs unions. At some point, we expect that one of these conflicting organizations will drive the others from the city. At this rate, we wager on a WCO win.

There are also other practical problems if an independent Flanders emerges, what happens to Brussels? If, just for argument's sake and truly not a personal preference, Belgium splits, which side would have Brussels?

Last checked, pro-independence parties in Flanders have taken the liberty of drawing an east-west border line running south of Brussels. As maps go, this implies that Flanders holds major claims over Brussels.

Can one fathom the consequences of NATO and the EU being part of Flanders? What would the other half of Belgium do? City-states fighting over another burg. Well, European history is full of wars over cities. One could argue that those were medieval times, but the current political climate in Europe is very provincial, if not medieval.How does a country of city-states survive? Ask the Italians.

Italy has been through this before. Venice versus Rome versus Tuscany versus Naples versus the French – and this went on and on until 1871. And now, almost 150 years later, we have Venice and Milan seeking what they politely call autonomy, and this is only for starters.

Already talk is about reviving the glorious days of the city-states of Lombardy and Veneto. Of course, we are again talking about medieval times. And why? Certainly because Italians seem unable to forget the still very vivid memories of the past 500 years.

But be forewarned that if Veneto turns into the good old Serenissima Repubblica di Venezia, Turks will certainly end up at the boot again. As history goes, one side's dream is the other's nightmare. You can bet your shoes that the 1481 mistake of Otranto will not be repeated. Turks now know that they should have started further north.

There may certainly be credible counter-arguments that now is not the time to talk about swords and that rising up in arms is so beyond the modern day and age. We have no reason to doubt that Venetian separatist ideals have a strong intellectual and philosophical basis and are all very peaceful at heart. Still, one cannot forget the 2014 Venetian separatist crew that set up a revolutionary organization, swore on an armed rebellion and turned a bulldozer into a makeshift tank. It would have been the first armored unit of a future independent Veneto. However, Italian magistrates were not amused and arrested the 30 culprits. Imagine a bulldozer street fight in historic Venice. That is what European separatism is nowadays.

The winds of independence

This brings us back to Spain and to the Basque region. Basques even tried terrorism for independence, but eventually gave up. Some were snarking that Catalans would never succeed without weapons, but the Basque experience says it all – 50 years of terrorism and around 900 deaths and still nothing. As for weaponizing conflicts, anything more severe would mean a second Spanish Civil War, and still, this would not guarantee an independent Bilbao. As we now know, in Spanish domestic disputes, Madrid wins.

Actually, Basques now have autonomy that is almost as good as independence, and they would have probably reached this point much earlier if they had tried politics instead of terrorism.

Sometimes one wonders how much neighboring France contributed to Basque separatism in Spain and whether Paris has given its 100 percent in Madrid's struggle against terrorism. This was just an idea when last April the Basque Homeland and Liberty (ETA) terrorist group gave the French police a list of 12 arms caches in southwestern France. Some terrorist group, which also shares ethnic affinity across the border, dug up the French countryside and hid weapons and ammunition for years, and no one knew about it. Now replace the ETA with Daesh.The Faroe Islands are in complete contrast to the Basque region's heat, spice and exotica. The islands are in the North Atlantic, cold, far from anywhere and populated by 50,000 people and lots of sheep. They, too, want independence; by they, we mean the former. The closest land is Scotland, about 300 kilometers away, but the Faroe Islands belong to Denmark, which is only 1,000 kilometers away. While Denmark is adamant about the Faroe Islands' happiness and swears that the islanders are enjoying maximum possible self-rule, the latest trend in European separatism is all or nothing. While claiming separatism for a bunch of already unattached and isolated islands may scream farce, Faroe Islanders are eyeing a referendum in 2018.

The Faroe Islands also have an impressive symphony orchestra, and their New Year's concerts are extravagant. But that has nothing to do with independence. The orchestra is quite independent, except when its conductor is in charge.

Let's note South Tyrol here, the area between Italy and Austria that belonged to the Austro-Hungary Empire. In 1915, the Allies promised this area to Italy in return for its participation in the war. Incidentally, the Allies had initiated similar bidding for all Ottoman lands at the time.

And during the war, Italy invaded South Tyrol and annexed it afterward. The story reminds us of the Dodecanese Islands, invaded by Italy under similar circumstances and later given away and re-gifted. We may call this practice an "island grab" in reference to the usual "land grab."

And that is not all. You must have heard about independent Scotland or Corsica, Sicily or Sardinia, maybe not so of Insubria, Savoy or Frisis. Any given day, Europe has no less than nine regions with various aspirations. A more detailed list names 30-odd regions that want out. That is far too many.

Still, of all the wanna-be-independents, our favorite is Bavaria. The proud region of the Rhineland was always local and nationalistic until the Prussians subdued it in the 19th century. However, Bavaria is still independently minded. In both news reports and perceptions, the Social Christian Union in Bavaria (CSU) is automatically aligned with Berlin, and thus Chancellor Angela Merkel's Christian Democratic Union (CDU), but after all, Bavaria is Bavaria and the CSU is the CSU, and they are distinct. The party's political support for the CDU is more of a coalition than a capitulation. Currently, German politics is in uncharted waters, rowing in a crisis of 70 years. If there is further instability, who knows, Bavaria may want out, too. I would certainly recognize the new capital, Munich. Munich is fun, wild and vibrating, well, maybe once a year in October, and that is enough.

The EU was supposed to be a place where all historic ethnic and other claims would find room to prosper, interact, mix and celebrate unity toward the common goal. Ethnic and cultural divisions would convert to the power of diversity. However, it has not. After 75 years of peace, 60 years of the customs union and 20 years of the common currency, the EU is anything but the dream time-share that shrewd sales agents had sweet-talked and cajoled you into buying.

If all is well in the show, this many should not be rushing for the exits. Hence Brexit.