Lighting the match in Jerusalem 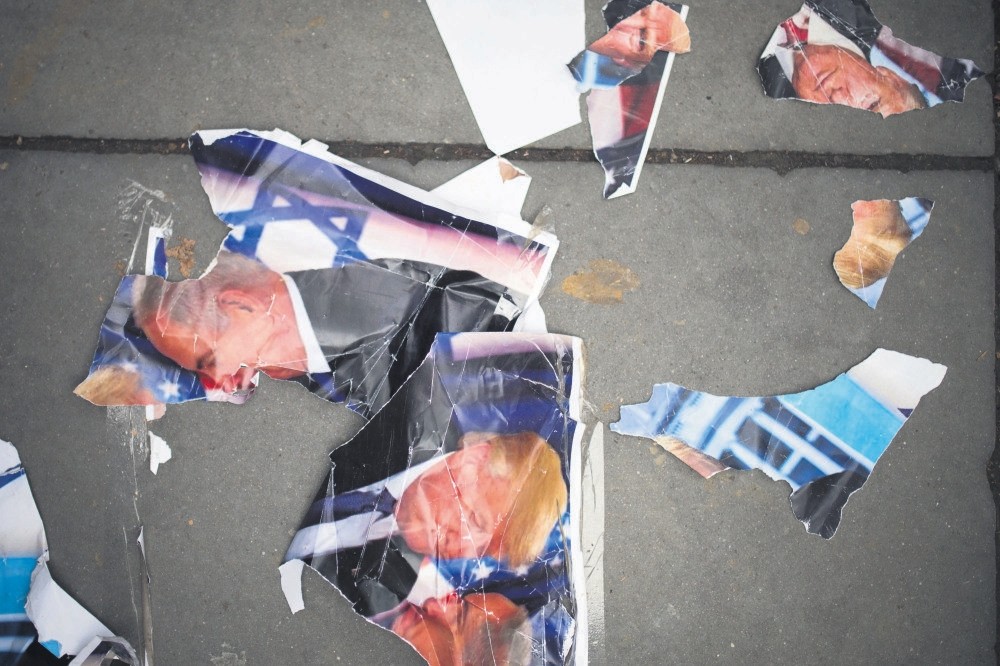 A ripped poster of U.S. President Trump and Israeli PM Netanyahu on the ground during a protest against Trump's decision to recognize Jerusalem as Israel's capital, Paris, Dec. 9.
by Tristan Dunning Dec 13, 2017 12:00 am

Trump's actions are driven by a desire to deflect attention away from his increasingly precarious domestic situation regarding the probe into Russia's involvement in the 2016 U.S. presidential elections

U.S. President Donald Trump's move to recognize Jerusalem as the capital of Israel is not only dilettante but also dangerous. Not only has it upended decades of U.S. foreign policy for no real discernible reason – it is hard to fathom who benefits from this aside from Israeli Prime Minister Benyamin Netanyahu – but it also runs the risk of sparking a wider religiously based conflict that would aid extremists on all sides. All it will take is a spark in Jerusalem to set the house on fire and send the situation spiraling out control.

It is worth noting, however, that U.S. Congress passed a law in 1995 recognizing Jerusalem, in principle, as the capital of Israel. Since then successive presidents have signed national security waivers every six months to prevent this from passing into law. What is important now is not so much Trump's stated feelings about the matter, but whether or not he stops signing these waivers.What complicates Trump's move is the unique status of Jerusalem and its centrality to Judaism, Christianity and Islam. Indeed, old maps often depict Jerusalem as the center of the world.

On a political level, Trump's decision has finally laid to rest any (already extremely tenuous) pretense that the United States is an honest broker in the Palestinian-Israeli conflict.

It has undercut the near unanimous international consensus that the status of Jerusalem must only be resolved through negotiations. It will not only strain U.S. relations with Muslim majority states, but also with European allies who still publicly espouse the virtues of the peace process.

King Abdullah of Jordan, a staunch U.S. ally, co-custodian of the Islamic holy site in Jerusalem and whose own population is 75 percent Palestinian, is reportedly humiliated.

French President Emmanuel Macron, among a plethora of other world leaders, and Germany have condemned Trump's decision as a violation of international law. Indeed, Israel has previously been the target of numerous U.N. Security Resolutions regarding the Judaization of Jerusalem, and East Jerusalem is considered occupied Palestinian territory under international law.

Israel will interpret Trump's decision as a green light for its policies in occupied East Jerusalem, including the Judaization of the city and enhancement of discriminatory policies aimed at forcing Palestinians who live there to leave.

To Palestinians, who insist that East Jerusalem will be the capital of any notional Palestinian state, the decision again highlights the perceived futility of negotiations.

While it seems unlikely that either the Palestinian Authority or Hamas would initiate direct hostilities with Israel given the power imbalances involved, it seems inevitable that conflict will occur on the streets. In this case, the Palestinian leadership would be unable to subdue this even if it wanted to.

The significance of Jerusalem as one of three recognized holy cities in Islam where, according to Muslim belief, Prophet Muhammad ascended to heaven, means that this decision not only has localized repercussions, but further embroils Israel and the United States in conflict with the wider Muslim world.

Trump's actions, however, will engender some unintended, yet somewhat ironic consequences.

First, it will refocus the world on the question of Palestine after it had largely disappeared from the agenda for the last few years while the world focused on the dramatic rise and fall of Daesh, unremitting internationalized conflict in Iraq and Syria and ongoing tensions around Iran vis-à-vis its nuclear program and geo-strategic rivalry with Saudi Arabia.

Second, Iran, for its part, will milk this for all it is worth by appealing to pan-Islamic sentiments, accusing the U.S. of wanting to destroy Islamic heritage and portraying itself as the champion of the Palestinian cause. Ditto for President Recep Tayyip Erdoğan who has already threatened to cut diplomatic ties with Israel.

Third, the recently reported efforts of Saudi Arabia and the United Arab Emirates (UAE) to cozy up to Israel will ironically need to be put on hold indefinitely or nixed.

Regardless of how their leaders feel about the Palestinian cause or their personal piety vis-à-vis Jerusalem, popular anger will force them to at least publicly condemn Israel and the United States.

Given the international backlash to the decision, it is difficult to discern why Trump made this decision now. Surely, no one high up in either the Pentagon or State Department thinks that it was a good idea. Surely, he has been advised that this will damage the international standing of the United States immensely, such as it is.

As when Trump launched a few token missiles at a Syrian air base last year and was immediately hailed by a variety of pundits as transforming into a true commander-in-chief, we can only speculate that Trump's actions are driven by a desire to deflect attention away from his increasingly precarious domestic situation regarding the probe into Russian involvement in the 2016 U.S. presidential elections. It may also be a nod to his evangelical base, which is a fervent supporter of Israel.

Creating a foreign policy ruckus is a tried and tested way of distracting away from domestic woes, but it is remarkably shortsighted and will almost certainly lead to conflict, death and destruction. Is there not enough conflict in the Middle East without throwing religious fuel on the fire?

After all, one can negotiate politics, but one does not negotiate matters of faith as embodied by Jerusalem.

* Honorary research fellow at the School of Historical and Philosophical Inquiry at the University of Queensland in Australia and publisher of Hamas, Jihad and Popular Legitimacy: Reinterpreting Resistance in Palestine

* Dr Tristan Dunning is an honorary research fellow at the School of Historical and Philosophical Inquiry at the University of Queensland in Australia and publisher of Hamas, Jihad and Popular Legitimacy: Reinterpreting Resistance in Palestine​
Last Update: Dec 13, 2017 2:02 am
RELATED TOPICS