Reasons why Gulf countries are accused of supporting Trump’s move 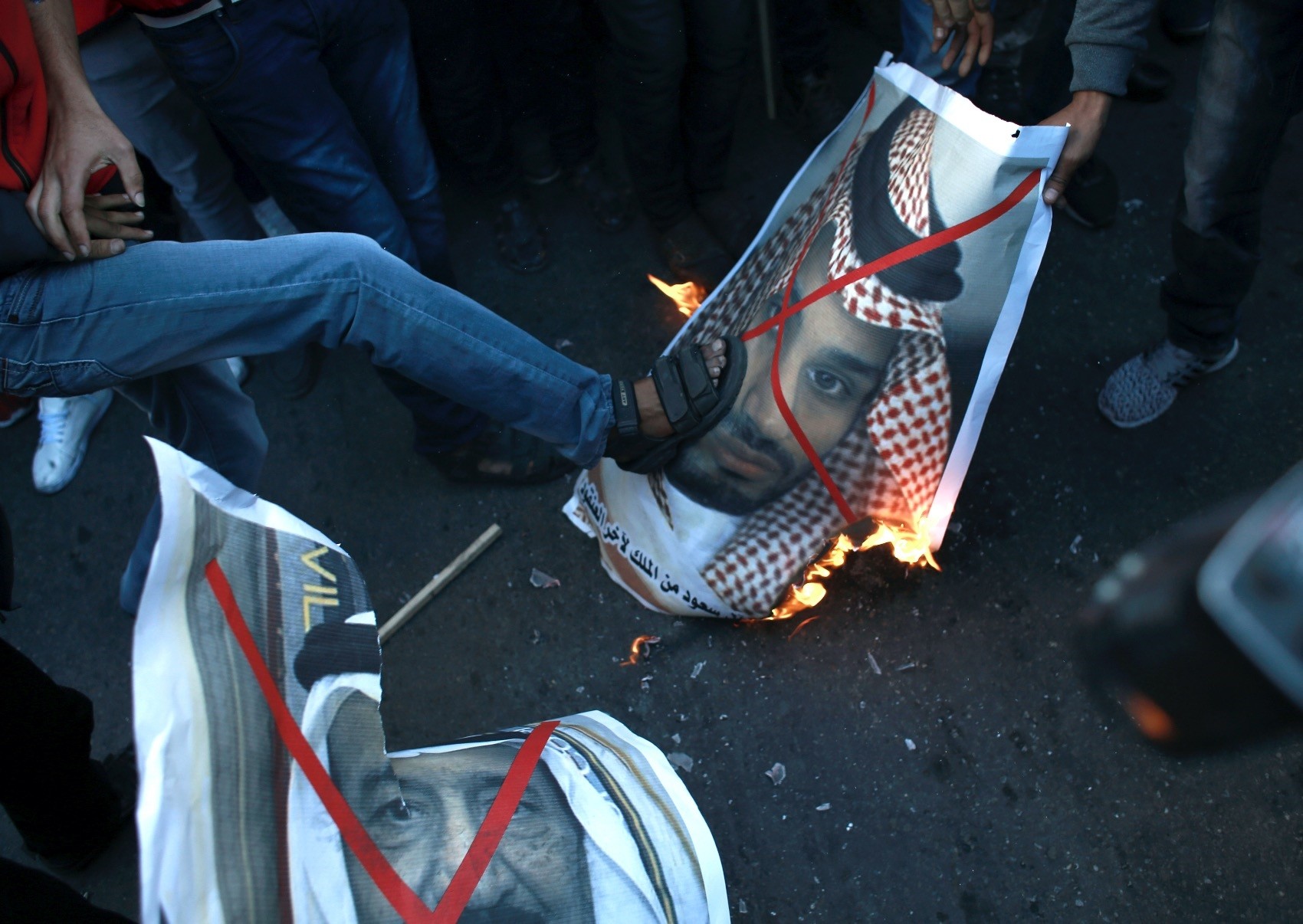 A short while after the inauguration of U.S. President Donald Trump, some prominent figures in a number of Gulf countries that have strict rules of obedience such as Saudi Arabia, the United Arab Emirates (UAE), Kuwait and Egypt, took steps that many interpret it as justifying the occupation of Palestine.

These public figures have represented Israel as the oppressed party while pointing at Palestine as the oppressor, particularly with the support of the young dynasty members who came to the forefront in the world agenda with the influence of the U.S. and the ones wishing to take advantage of those siding with them.

This group, which consists of those demonstrating their admiration for the West on social media, having been educated at such places like the Royal Military Academy Sandhurst (RMAS), oppressing anyone who might contribute to the fall of their sovereignty but also defending Western liberalism at the same time, really think that they can shape the region.

Previous generations would also have had close ties with the West, however, it was not represented to the public that much and they endeavored to give no concessions regarding crucial issues like Palestine.

Until Trump's move, the pro-Israeli arguments were mostly on social media and the press in Gulf countries. After the announcement, these countries condemned the action in a relatively soft manner but at the same time, we have seen reports saying that Riyadh ordered its media to limit coverage for Trump's Jerusalem move and also together with Bahrain, it called on its citizens to avoid participating in demonstrations taking place in Jordan.

Palestinians are accusing Saudi Arabia of collaborating with Israel and also pushing other countries to "sell" the Palestinian cause. Demonstrators in Gaza burned the photographs of the Saudi King and his son for their alleged role in Trump's move. Israel'i news channel TV 10 claimed that the U.S. president could not take such a step without getting support of Saudi Arabia and Egypt. Furthemore, two parliamentarians from Jordan told media that Jordanian King Abdullah II was being forced by Saudi Arabia and UAE to accept Trump's Jerusalem decision. It is important to note that Jordan is currently getting $1.6 billion aid from the U.S. and that Saudi Arabia, UAE, and Kuwait did not renew a five-year financial assistance programme with Amman worth $3.6bn that ended in 2017.

While all these political steps are being taken, we witness Saudi newspaper Alaph conducting an interview with Israeli Intelligence Minister who said his country would send Lebanon back to the "Stone Age". Saudi muftis avoiding Jerusalem topic at Friday sermons and a prominent Saudi religious scholar from King Saud University -- with 20.4 million followers on Twitter -- bypassing the topic of Jerusalem and tweeting 15 posts on importance of wearing "clean socks" are the actions that Palestinians would not forget for a long time.

I think that it is vital to focus on the better image of Israel among Saudis on social media over the last few months in view of the developments within the past year.

One of the key actors of the latest Jerusalem move is Saudi Arabia's Crown Prince Mohammad bin Salman, also known as MBS, who has close ties with the U.S. administration, particularly with Trump's son-in-law and senior adviser Jared Kushner. The 32-year-old crown prince, who became the heir apparent to the throne after Mohammad bin Nayef was removed from all positions by the king's decision in June 2017, allegedly paid a secret visit in early September to Israel, a country Saudi Arabia does not officially recognize. They remained silent after the visit was leaked to the Arabic and Israeli press one week later. But as an Israeli official who spoke to Agence France-Presse (AFP) in October confirmed the visit, Riyadh was obliged to deny the news after two days of silence.

Having held an array of meetings with Kushner in Riyadh after returning from Israel, MBS also started to spread fear with the corruption investigation he runs himself inside the country. Also, The New York Times featured that during Palestinian President Mahmoud Abbas's visit last month, Abbas was forced to accept the "peace" plan that was developed under the leadership of MBS and Kushner. This plan reportedly suggests making Abu Dis the capital of Palestine instead of Jerusalem, while stipulating that Israel will not withdraw from the territories it occupied. It was reported that Abbas was offered some money and given a two-month deadline to accept the deal. As the Palestinian administration did not accept the deal, Jerusalem was declared the capital of Israel by the U.S. before the two-month deadline ended.

At a meeting held a year and a half ago, Israeli Prime Minister Benjamin Netanyahu urged the Arab countries having secret ties with Israel to publicly acknowledge their ties. Addressing the Knesset Foreign Affairs Committee two days before Trump's Jerusalem announcement, Netanyahu claimed that many Arab states have gone through unprecedented changes and want to improve relations with Israel.

Before I began to write this article, Netanyahu attended the Digital Diplomacy Conference and said Israel is banking on social media to win "the hearts and minds of the Arab public." He argued that Israel's offer of "peace" will be accomplished through social media rather than through governments, adding that some Arab countries want to get to know Israel.

The social media force Netanyahu refers is currently enacted craftily by the secret friends of Tel Aviv. In this framework, I would like to present a couple of examples:

Jamal Khashoggi, who was born in Madinah and has been working as a journalist since 1985, has continued his profession in the U.S. for a year now. Ironically, Khashoggi was banned by the Saudi administration from publishing or appearing on television for criticizing Trump in December of last year. Trying to tone down his criticisms since his family lives in Saudi Arabia, Khashoggi wrote these words after Trump's Jerusalem move: "The Saudi electronic army has a devastating effect on national public opinion as it can push it to take poor attitudes toward the principles of the Uma. Everyone has become familiar with their [social media] accounts. Look at how they tweet on the topic of Jerusalem. Why? Who has an interest in destroying the Saudi values system?"

Israel to be the top tourist destination

Hamza al-Salem, an economist and assistant professor at Prince Sultan University in Riyadh, wrote that Israel will be the top tourist destination of Saudis after being recognized by Saudi Arabia. Stating that Israel "is one of God's most beautiful countries in terms of its nature and development," al-Salem argues that the normalization of relations between the two countries will eliminate the exploitation of several issues, namely the Palestine issue and Israel's occupation.

Normalization with Israel on agenda

Speaking to TV station Rotana Khalijiyya, writer Ahmed al-Arfaj remarked that normalization with Israel was on the agenda last week, adding that: "Enmity will lead us to nowhere. There is no harm in reconciling with Israel as long as Palestinians get their rights. Saddam Hussein came along and said: 'I will burn half of Israel.' But Saddam is gone, and Israel has grown stronger. Along came al-Qaddafi and said: 'I will burn the other half.' But al--Qaddafi is gone, and Israel is stronger."

Israel undermines Palestine, not me

Saud Fozan, a journalist for AlSharq.net, clearly said he does not consider the expansion of Israel's invasion with the country's bomb attacks on Palestinians. He wrote: "I am not here to defend the Jews, i.e. the Israelis, but truth be told [...] show me one Israeli who killed a single Saudi." Women's rights activist Suad al-Shammari also sided with Fozan: "We have tried absolutely anything for 60 years and have been deceived by the fake nationalism of Arab states. Why don't we peacefully coexist with Israel?"

Another journalist, Mohammed al-Shaikh, wrote a tweet that corroborates the argument that Riyadh cooperates with Israel against Iran in return for Jerusalem: "Yes, Iran is our top enemy, not Israel. My country is being targeted by the Persians. Only a fool and a real jack*ss would think our love for Palestine would come at the expense of our own nation."

Abdul Aziz Al-Sheikh, the Grand Mufti of Saudi Arabia, released a fatwa that fighting against Israel is inappropriate and Hamas is a terror organization. After the fatwa, Israeli Communications Minister Ayoub Kara congratulated Al-Sheikh.

In a country where writing an inappropriate tweet results in imprisonment, such words cannot be uttered arbitrarily. Apparently, this is the part of a state policy, that is to say, Trump's deal with Riyadh. Former Saudi Justice Minister Muhammad bin Abdul Karim Issa and Saudi Ambassador to France Khalid bin Mohammed al-Angari have recently paid a visit to a synagogue in Paris a few weeks ago. It seems that we will see such gestures more and more in the forthcoming days.

If crown princes, the ones participating in the power dynamics behind the scenes and the technocrats referred in the beginning of the article, can give up Jerusalem just to be favored by the U.S., it is no surprise that they pay $450 million for Leonardo Da Vinci's Salvator Mundi.

MBS, who allegedly envies the ultra-secularist structure of the UAE that actually has an inhuman monarchical structure, might join the parties of UAE ministers and diplomats if he continues like this.

Following the Dec. 17 and 25 judicial coup plots perpetrated by the Gülenist Terror Group (FETÖ) and the Gezi Park protests in Turkey, some groups assumed that they seized control over the country by means of social media, which shows the current picture. It is not hard to guess the situation MBS and his circle will get into if the schemes of the Gulf bloc and Israel fail.