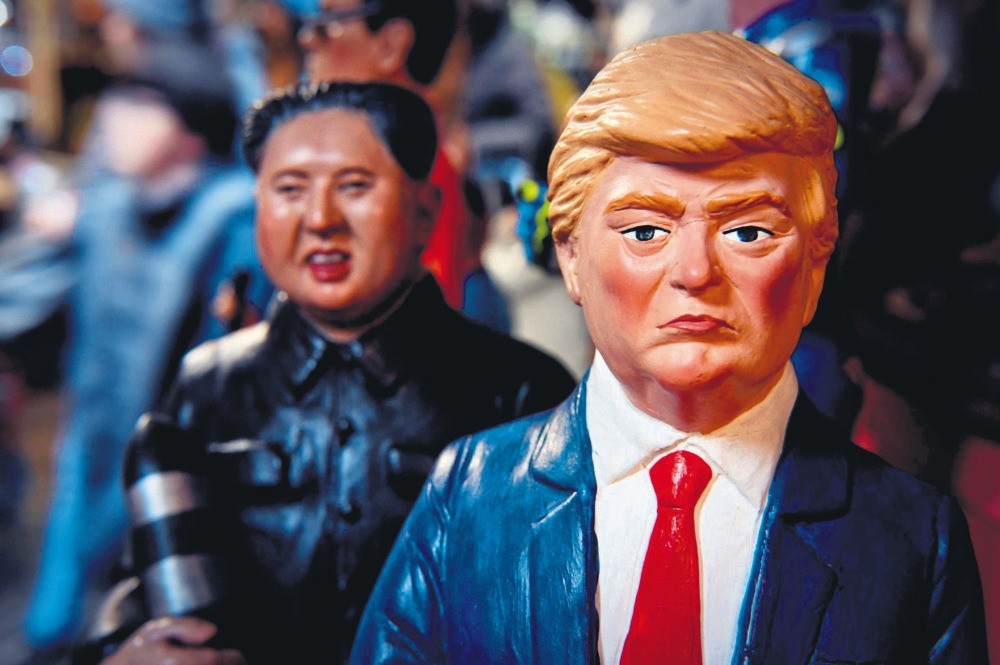 Trump's choices affect the whole world, and when this effect is negative, both the friendship and greatness of the U.S. is questioned

Indeed, Trump's Jerusalem decision brings many things to mind at once. It is unimaginable that the U.S. is unaware of the complications of its decision to recognize Jerusalem as Israel's capital – the last thing that the region needs at the moment. In fact, the official recognition has been delayed every six months since 1995, citing concerns over U.S. security.

Contrary to what Trump said in his statement, that decision cannot serve peace in the region in any way. Actually, we all saw what happened after the decision was announced on Dec. 7. I can hardly see any sign of peace and optimism at all. Further, some even say the already thin hope of peace has fully disappeared after the move. Let's all hope that this prediction proves wrong.

Jerusalem, perhaps the heart of the world, is holy for all three Abrahamic religions. Eastern Jerusalem is the capital of Palestine. It is also important for Islam as both the place where Prophet Muhammad ascended to heaven and as the first qibla. The Dome of the Rock, which is frequently confused with Al-Aqsa Mosque and is known for its golden dome, was built by Umayyad Caliph Abd al-Malik next to Al-Aqsa Mosque in 691 A.D. The second Temple of Solomon, which is considered by Jews as the holiest site and which was destroyed circa 70 A.D., had been on the same hill where these mosques are.

At the same time, Jerusalem is the birthplace and holiest city of Christianity. It is the city where Jesus Christ engaged in his mission, performed miracles, was betrayed and crucified but rose from the dead three days later. Along with all the other holy shrines, the Church of the Holy Sepulchre, which was built on the site of his empty tomb, is also in Jerusalem.

After the Balfour Declaration

Jerusalem, which should be a city of peace and harmony when looked at from a religious perspective, has become exhausted due to tears and pain. As for a brief chronology of events in the modern era, the Balfour Declaration in 1917 supported the establishment of a Jewish state in Palestine upon initiatives from Theodor Herzl, the founder of Zionism. Following that, Aliyah, the immigration of Jews from the diaspora to the region, began. In 1947, the United Nations approved a partition plan that would divide Palestine into Jewish and Arab states, under the obvious influence of the Holocaust in Europe. The U.S. recognized the Jewish state immediately, while Western Jerusalem fell under Israeli control and Eastern Jerusalem was annexed by Jordan. In 1948, several Arab states attacked Israel but were defeated.

In 1949, Israel was admitted to the U.N. In 1964, the Palestine Liberation Organization (PLO) was founded in Jerusalem. Israel won another victory in the Six-Day War in 1967 and captured Eastern Jerusalem as well. Israel also won the Yom Kippur War, also known as the Ramadan War, in 1973, the fourth Arab-Israeli war, and captured much territory, including the Golan Heights. In 1978, during President Anwar Sadat's rule, Egypt became the first Arab state to recognize Israel. In 1980, Israel declared Jerusalem its capital.

However, with U.N. Security Council Resolutions 242 and 478 on Jerusalem and Palestine in 1967 and 1980, respectively, the U.N. condemned the occupation of Palestinian territories through armed aggression. The resolutions called on Israel to withdraw its armed forces from occupied territories and reiterated that all measures that had altered the status of Jerusalem were null and void. In fact, the latest decision is against the Oslo Accords, too.

Hamas, i.e., the Islamic Resistance Movement, which was founded in 1987, won the elections in 2006, and formed a coalition government with Fatah, the largest faction of the PLO, in 2007. As the embargos on Palestine were eased, Palestinian President Mahmoud Abbas said he would continue peace talks with Israel. Indeed, political unity was reached in Palestine for the first time in years, bringing an opportunity to sign a comprehensive agreement with Israel. Turkey was mediating negotiations between Israel and Palestine. But Israel was not happy with that. In 2008, it found an opportunity after rocket attacks from Gaza. Thus, Israel launched Operation Cast Lead in late 2008. Around 1,300 people died as a result. The U.N. Fact-Finding Mission on the Gaza War, known as the Goldstone Report, accused Israel of using disproportionate force against Palestinians. Concurrently, the so-called one-minute incident took place between then Prime Minister Recep Tayyip Erdoğan and Israeli President Shimon Peres. Erdoğan severely criticized Israel for the civilian deaths.At the end of the day, the percentage of Israeli-controlled territory rose from 6 percent at the beginning of initial migrations to 80 percent today. This expansion has occurred through successive wars. It can be said Israel views war as opportunities to attain its ultimate goal.

And Trump has given Israel that opportunity once again. Nobody can claim that this decision will bring peace to the region. The brief chronology above proves that the game is based on war and that basically there is no place for peace.

Perhaps that decision was a folly to be committed only by a weak U.S. president. Having lost nearly all members of his initial inner circle and hamstrung by an FBI investigation into Russian meddling in the U.S. presidential election, Trump definitely needs the support of a strong lobby. As a cornered president, Trump was perfectly suited to make such a decision, which has been shunned since 1980 by both Democratic and Republican presidents. A responsible U.S. president who felt he had his party's backing would first think about his country's credibility and the complications of the planned move. As Erdoğan has also said, it is not about handing over property, but about recognizing a holy city, which is the envy of the world, as the capital of an aggressor in an unstable region, a move that could trigger a series of tensions.

Also, this move can deal a big blow to the credibility and influence of the U.S. with regard to democracy and human rights. It may be compatible with the occult aspirations of an influential denomination within the U.S., but the rest of the Christian world is rather unhappy with it.

Great powers like the U.S. avoid such thoughtless and irresponsible moves that will hurt their allies, such as Trump's Jerusalem decision. Behaving like North Korea's leader, who is a very unpredictable actor in the international system, will not make America great again. Its choices affect the whole world, and when this effect is negative, both the friendship and greatness of the U.S. is questioned. Making America great again does not entail launching crazy moves to return to a cold war.

Let's hope that these warnings will be heeded and the U.S. engages in some self-criticism. Otherwise, a war environment in the region is bound to last for decades more, and may evolve into a huge vacuum that can suck in the world as well.