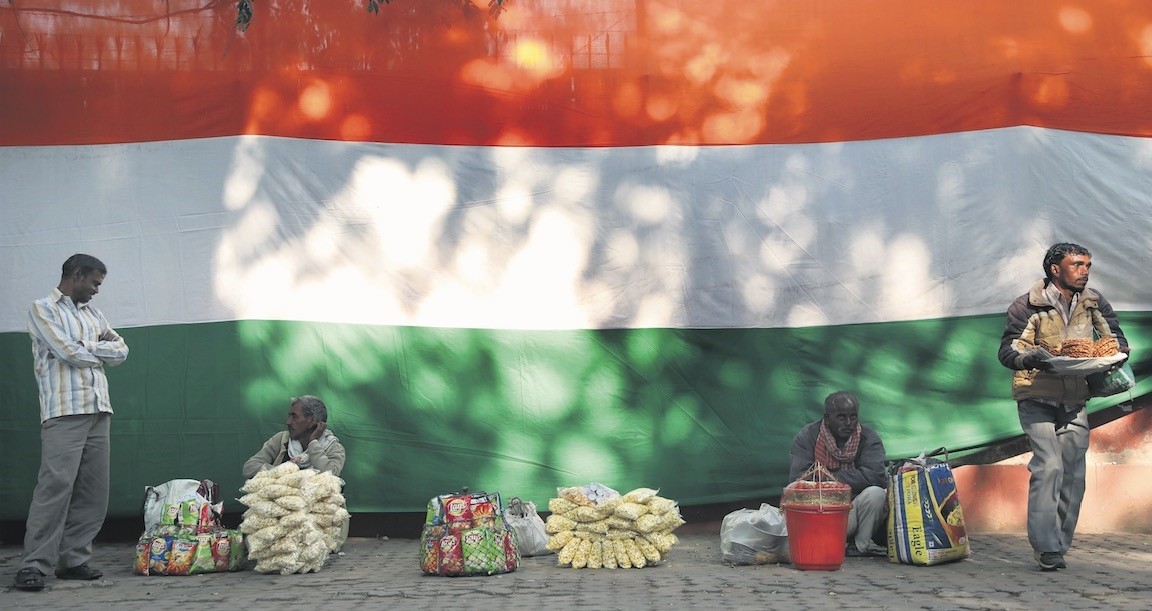 India is considered the world's largest democracy. It has nearly 815 million eligible voters. Just a few years after its independence in 1947, the authors of the Indian constitution of 1950 took the extraordinarily bold step of establishing universal suffrage and all adult citizens of India received the right to vote. According to certain scholars, with this singular act, India became the world's first large democracy to adopt universal suffrage from its very inception as an independent country. This populous democratic system currently has two main political parties – the Indian National Congress (INC), established in 1885, and the Bharatiya Janata Party (BJP), established in 1980. Apart from these two main political parties, there exist a number of regional and state parties, some of them splinter groups from national parties and others independently organized.

However, these two main political parties dominate and shape the elections and democratic system of India.The INC, in the post-independence period under the leadership of India's first prime minister, Jawaharlal Nehru, strongly advocated the spirit of a pluralistic democracy and defended the idea of unity in diversity. Nehru's speech at the 58th Session of the INC in Hyderabad from Jan. 15 to Jan. 18, 1953, bears this title. In his speech, he stressed: "India is a country with a basic unity, but of great variety in religion, in cultural traditions and in ways of living. It is only by mutual forbearance and respect for each other, as the great Asoka thought, that we shall build up a strong, stable and cooperative community in the whole of India."

The BJP's political conception stands in stark contrast to this ideal. The party is committed to Hindutva. The BJP Vision Document of 2004 states under the sub-title of "cultural nationalism" that "Hindutva draws its inspiration from the history and civilization of India" and that Indian nationhood stems from a deep cultural bonding of the people that overrides differences of caste, region, religion and language. In the understanding of the BJP's cultural nationalism, Indianness and Hindutva are synonyms, and it is the basis of Indian national identity. A number of scholars and political analysts consider Hindutva ideology an attempt to redefine India as a Hindu country to the exclusion of other religions, and thus categorize the BJP as a Hindu nationalist party. It should be noted that the BJP, in its main page under the party logo, advertises itself as "The Party With A Difference."

Narendra Damodardas Modi, who is the 14th and current prime minister of India in office since May 2014, is a member of the BJP and was once a full-time worker in the right-wing Hindu nationalist Rashtriya Swayamsevak Sangh (RSS), also known as the National Volunteer's Organization, established in 1925. The RSS styles itself as a cultural organization devoted to protecting India's Hindu culture. However, the RSS is accused of being an anti-Muslim organization with a history of fueling religious tensions. The organization has been banned three times in post-independence India, including after a former member assassinated Mahatma Gandhi in 1948, and following the 1992 demolition of Babri Mosque in the city of Ayodhya in the northern state of Uttar Pradesh. On Dec. 6, 1992, the BJP and many of its hardliner associates organized a rally in Ayodhya, and within hours, over 15,000 Hindu activists razed the historic mosque that was built on orders of Mughal emperor Babur to the ground with axes and hammers. The demolition of the mosque led to deadly nationwide riots.

In contrast to the "unity in diversity" understanding of the INC as explained above, the BJP and its hardliner affiliates pursue Hindu nationalist policies. This policy equates Hinduism with Indian national identity. It seems that this conception unavoidably leads to exclusion of other religions, and especially the more than 170 million Muslims living in the world's second-most populous country. Examples of this exclusionary understanding are steadily increasing. For instance, Hindu nationalists recently attempted to discredit the country's best-known monument, the Taj Mahal, which was commissioned by Mughal Emperor Shah Jahan.

Very recently, Rahul Gandhi formally took charge as INC president. The 47-year-old INC leader is the sixth member of the Nehru-Gandhi family to occupy the post, taking over from his mother who held the position for 19 years. In his inaugural speech, he said:

"The [INC] took India into the 21st century while the prime minister today is taking us backwards, to a medieval past where people are butchered because of who they are, beaten for what they believe and killed for what they eat. This ugly violence shames us in the world. Our country, whose philosophy and history is born out of love and compassion, is tarnished by such horror, and no amount of hugs can repair the damage done to this great country. This vision belongs to a time where people did not have the rights and freedoms that have made our country the profound entity it is – a time when people did not have voice, did not have the right to dissent, to disagree, to differ, to be."

All these examples indicate that Indian politics and democracy are highly fragmented. It seems that this fragmentation is sharpening by the day. This course unavoidably brings to intolerance and exclusion. It pushes people, both ordinary and elite, into considering a part of the population as others and popularizes the divisions of us and them. The end product of this course is communal polarization. The world's second-most populous country in the near future will most probably face a crucial choice for the future of its democracy in unity in diversity or communal polarization.