What do December demonstrations mean in Iran? 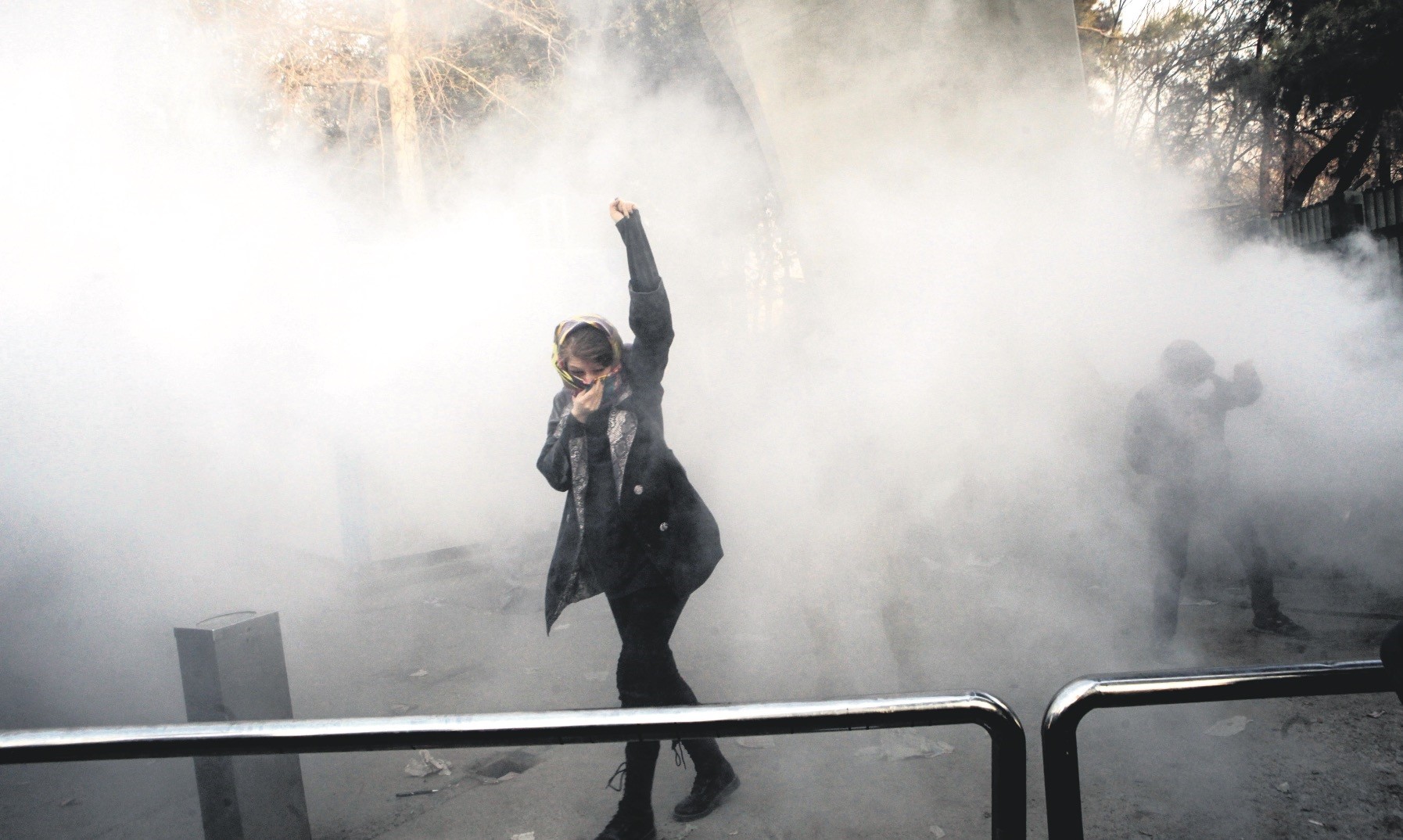 A university student attends a protest at the University of Tehran while a smoke grenade is thrown by anti-riot police, Tehran, Iran, Dec. 30.
by Mojtaba Barghandan Jan 03, 2018 12:00 am

As a country in the heart of the crises-hit Middle East, and which has been under crippling sanctions for nearly four decades, Iran is still passing through a sever and critical process

Dec. 30 in the domestic political calendar of the Islamic Republic of Iran is the reminder of two different demonstrations, one in 2009 and now those in 2017. The recent demonstrations in various provinces and cities in Iran have differences both in nature, motives and in essences with those of 2009. However, people are at the center. This is a very sensitive issue – every government pays serious attention if people are the main force behind a movement or uprising – it is more powerful in the sense that people can be both devastating for and/or influence the country's development.

Demonstrations and protests are everywhere. Peoples in democratic systems freely demand their rights. However, people differ in terms of understanding of politics and security concerns and priorities of their country, as understanding the concept of security is a fundamentally different kind of intellectual exercise. This makes the situation for the government more challenging. People in various cities protested the government's regional policies with regard to developments in Syria, Yemen, Lebanon and elsewhere. Their protests do not represent the ideas of all people in Iran. They also do not have similar understandings of the countries' security and strategic priorities. To avoid facing such challenges, governments try to be more transparent in their regional and economic policies, spending and budgets and pay more attention to the people's social and moral rights and welfare. These are less seen in most developing countries, despite most of them being democracies in one way or another.

On one hand, such protests are no longer characterized as a government's failure or incapability, as the world has been witnessing a lot of violent protests throughout the U.S. and Europe since people are unsatisfied with their governments' welfare and economic policies. This, to some extent, applies to the government and the nation of Iran. As a country in the heart of the crises-hit Middle East surrounded with crises-hit states, and which has been under crippling sanctions for nearly four decades, Iran is still passing through a very hard process, and it is not only the government that is responsible, but rather the whole nation is needed to play its role in the process.

On the other hand, the legal concept and basis of gatherings and demonstrations differ in various countries. According to Article 27 of the Iranian constitution, people are free to gather and hold marches on the condition they do not carry weapons and their protests are not detrimental to the community and social provisions. Recent marches around the country have been peaceful at the beginning but have become violent in some cities, and security unites have had no choice but to intervene according with Article 27. However, the whole issue has been exaggerated through various social media platforms. Demonstrations and protests represent people's direct participation in the political and social scenes to get their voices immediately heard. Demonstrations represent empathy through temporary gathering among the various classes of society, which is recognized as a social right of people both in international law and the Iranian constitution. It starts when a certain group or class in society are fed up and unsatisfied with the political, social, economic and/or cultural policies of their government.

So how can we understand the moral and social natures and reasons behind the Dec. 30, 2017 demonstrations?

On Dec. 30, 2009, pro-government supporters staged big rallies in major cities across the country in response to opposition protest by supports of the Green Movement against the result of the June presidential election.

What we saw in the last three days of 2017 seems fundamentally different that those in 2009.

One could link the recent protests in Iran to different reasons. One of them might be the Iran deal, or Joint Comprehensive Plan of Action, which caused the rise in the people's expectations. However, these protests have the least direct relevancy to the nature of the Iran deal itself, as well as the U.S. plans for regime change. Ironically, it has no ties with any historical events from Dec. 30, 1987 to Dec. 30, 2016. Rather, economic hardships, lack of a functional welfare system, lack of coordination and growth in unemployment are some other reasons behind the protests that began on Dec. 30, 2017.

Some of the parameters that would help to understand the moral and social nature and reasons behind these most recent protest include:

1. Protecting and/or defending Iran's security and sovereignty along with hope for the lifting of U.S. sanctions through diplomacy were the main reasons behind the Iran deal. In spite of this, President Hassan Rouhani's government has inevitably provided some reasons to domestic opponents in support of the Iran deal.

2. Iranians have been giving full support to the government and they, in return, expected the government to promote civil rights and economic development, which have been either far more than the capacities of the government itself or needed more time to be fulfilled, because the U.S. has ignored the spirit and articles of the Iran deal since Donald Trump was elected president.

3. The government presupposed the betterment of people's life and social welfare by creating new jobs through new foreign investment incentives along with support to domestic investors. According to some news, there has been a 33 percent rise in foreign investment and 2.7 percent growth in the value of stock exchange trading in Iran, not only oil and gas, but also in production sectors. However, the government's plan has not worked yet, as it either lacks organization and management or has been influenced by U.S. pressures.

4. The government tried to change the nature of Iran's traditional economic system. It has employed new economic strategies to signify the importance of capital market and for finding new ways of financing in the economy.

5. According to some reports, Rouhani's government came to power while his predecessor's economic policies over two terms. This has been a full-scale exception in the sense that during the eight years Mahmoud Ahmadinejad's presidency, and the government's debt to domestic banks increased eightfold, which is said to be an unprecedented record in Iranian economic history.

6. Disputes in domestic politics have provided opportunities to anti-government groups or fronts in order to de-facilitate the economic and welfare reforms or developments. Ahmadinejad and some of his former cabinet ministers have been in a bitter war of words with Supreme Leader Ayatollah Ali Khamenei and the Larijani family since Rouhani won re-election by a wide margin in May 2017.

7. Ahmadinejad released a video on Dec. 17, 2017. He gave a 48-hour ultimatum to the head of Justice Ministry and Chief Justice Gholam Hossein Esmaeili to publish documents regarding the charges the ministry filed against him and members of his cabinet, naming Hamid Baghaei. Recently, Ahmadinejad released a second video in which he addressed the public in Iran as "freedom and justice seekers". In the video released through social media such as Telegram, Instagram and Facebook, he also condemned the head of the judiciary and his decisions. He also said people from all over the country were calling on him and urged him for help. The nature and contents of his public address has been characterized Esmaeili as his increasing tendency to pretention and a conspicuous show in an attempt to impress others and to cause public disturbances. This video was released only 48 hours after the end of the ultimatum.

8. Thus, certain groups in society affiliated with opposition groups or parties within the country misused Iran's domestic challenges. The outcome has been anti-government protests characterized by foreign media outlets as the biggest unrest since 2009.

9. Some foreign media outlets affiliated with anti-government networks, in particular through social media, linked the protests to the economic and social challenges in Iran. Even Seyed Ibrahim Reisi, Rouhani's main electoral competitor, reacted to the protesters in Mashhad. He posted on his Twitter account: "The government has an important role in the status and livelihood of the people, in particular, the poor." He went on as saying: "The country's main priority should be solving the people's livelihood problems. If the government shows serious intention and determination in solving people's economic problems, it will certainly have the backing and support of its people."

10. Rouhani's government has been trying to take constructive steps in economic and social developments through changing the path of regional and international developments in favor of its people and sovereignty since 2013. The current process is a national policy, so the current government and successors have great responsibility. Thus, Iran needs more time, budget, good management and domestic coordination to fulfill its development plans.

To conclude, such protests and gatherings are no longer characterized as a government's failure – the world has been witnessing a lot of violent protests throughout the U.S. and Europe. Demonstrations often represent empathy through temporary gathering among the various classes of society, which is recognized as a right of the people. It starts when a certain group or class in society is fed up and unsatisfied with the political, social, economic and/or cultural policies of their government. As a country in the heart of the crises-hit Middle East, and surrounded with crises-hit states, and which has been under crippling sanctions for decades, Iran is still passing through a sever and critical process, and it is not only the government that is responsible. Differences in the domestic political arena, pressures from outside, personal disputes among high-ranking officials and disputes among political parties have always been seen in various countries and systems of governments, but countries and their peoples employ various instruments to make their voices heard.