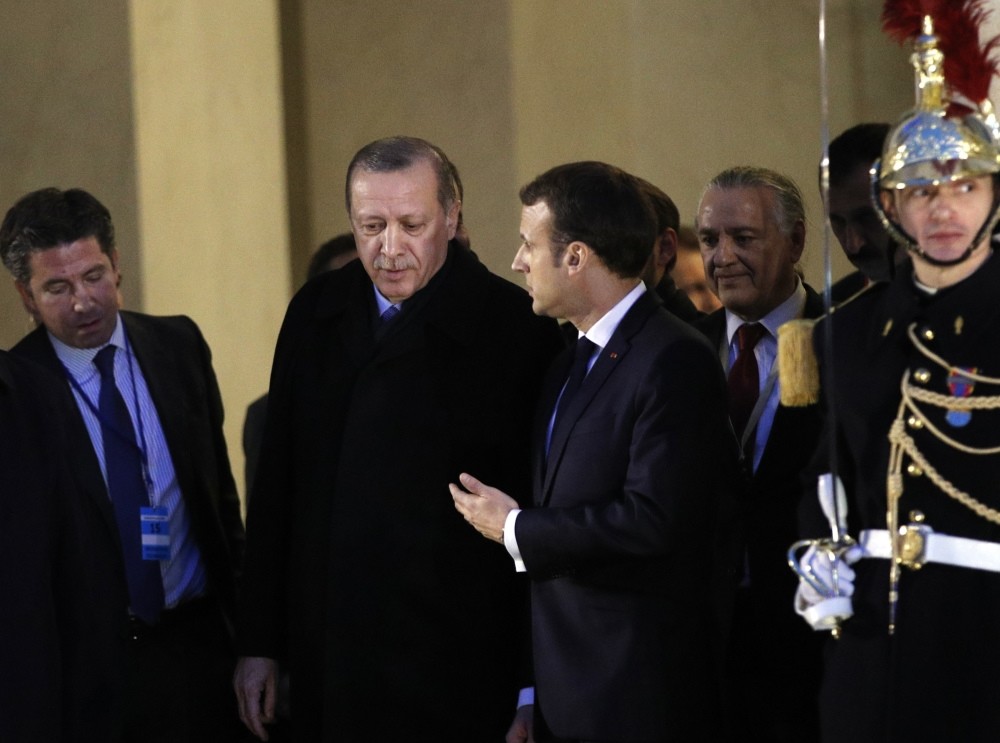 Turkey considers the Balkans as an important bridge to strengthen ties and relations with other European countries. In the last couple of years, Turkey's relations with the EU and European countries have broken down because of domestic political issues in both Turkey and European countries. In addition, Turkey has been more concerned with dealing with security issues, civil wars, humanitarian crises and migration coming from the Middle East. Humanitarian and security issues related to the Middle East overwhelmed Turkey's diplomatic capacity and security apparatus, which was hit hard by the failed coup on July 15, 2016. Last week's diplomatic contacts were the first constructive diplomatic efforts from Turkey for a long time. There are many obstacles ahead, yet the time is ripe for new momentum.

On Wednesday, Erdoğan met France's young President Emanuel Macron at the Élysée Palace in Paris. The meeting was one of the most important meetings of its kind with France in the past several years. Bilateral relations, coordination in combating terrorism, cooperation in the defense industry and furthering common economic projects were the main items of the meeting. The two leaders also talked about the EU and the ongoing crises in the Middle East. Both countries share similar views about the Syrian civil war, they are also concerned about U.S. President Donald Trump and his administration's irresponsible positions concerning Jerusalem. Both countries were overwhelmed by domestic problems and were trying to contain terrorist threats in their countries.

France, one of the two founding partners of the EU, lagged behind Germany in the past several years due to problems in its economy, but domestic politics is trying to strengthen its diplomatic posture with its young and visionary president. The EU lost its long-term strategic vision after the failure of the referendums on a European constitution and the 2008 economic crisis. German Chancellor Angela Merkel played an important role in stabilizing the European economy and institution, but diplomatically and politically, the EU lost its long-term vision and grand strategy. Transatlantic cooperation is experiencing its worst crisis since the World War II due to Trump's indifference to Europe, and Macron seems to be the only option for Europe to restore this cooperation. Turkey's diplomatic efforts with France and Macron are a promising move to keep Turkey within the transatlantic loop.

On Tuesday, Bulgaria's Prime Minister Boyko Borissov visited Istanbul to celebrate the opening of Bulgarian St. Stephen Church, which underwent a large-scale restoration. St. Stephen Church was rebuilt in 1898 from prefabricated cast iron, and it was restored with funding from the Istanbul Metropolitan Municipality. The timing of the opening was symbolically significant because it was just at the beginning of Bulgaria's term in the EU presidency. Erdoğan emphasized Turkey's multicultural and pluralistic legacy from the Ottoman era and expressed Turkey's willingness to improve its relations with Balkan countries.

In the meantime, Çavuşoğlu met with Gabriel in Goslar, Germany. Friendly photos of the two ministers were released to the press and some opposition figures criticized Gabriel's warmth toward Çavuşoğlu in Germany. The Turkish public, however, is excited about normalization in Turkish-German relations. Turkish-German relations have been under the shadow of Germany's unwillingness to cooperate with Turkey in its efforts to contain the Gülenist Terror Group (FETÖ) threat. It seems that cooperation between two countries to deal with terrorist threats will strengthen after the normalization of diplomatic relations. Finally, Croatian President Kolinda Grabar-Kitarović was the official guest of Erdoğan, and she had productive meetings in Ankara. The two presidents emphasized bilateral cultural and economic relations and expressed their willingness to cooperate in dealing with security challenges. A Greek court in Athens also reversed an asylum decision for soldiers suspected of participating in the failed coup in July 2016.

Turkish people and the government are definitely in search of friendlier relationships with European countries and support the improvement of relations with the EU. The European pillar of Turkish diplomacy is vital but it was under the influence of domestic politics both in European countries and Turkey. Unrealistic expectations on both sides frustrate both the Turkish public and European leadership. While criticizing the EU for being hypocritical of Turkey for many years, Macron warned Turkey not to have unrealistic expectations about EU membership. Membership is a long-term strategy for Turkey, and no Turkish leader will abandon this policy, but it should not hold Turkey's bilateral relations with key EU member countries captive. It is therefore crucial for Turkey to keep positive bilateral relations with key European countries without abandoning the EU membership process. It is also imperative for the EU to keep Turkey as a partner in critical strategic areas such as energy, security and migration.