Egypt's forgotten revolution, the future of the Sissi regime 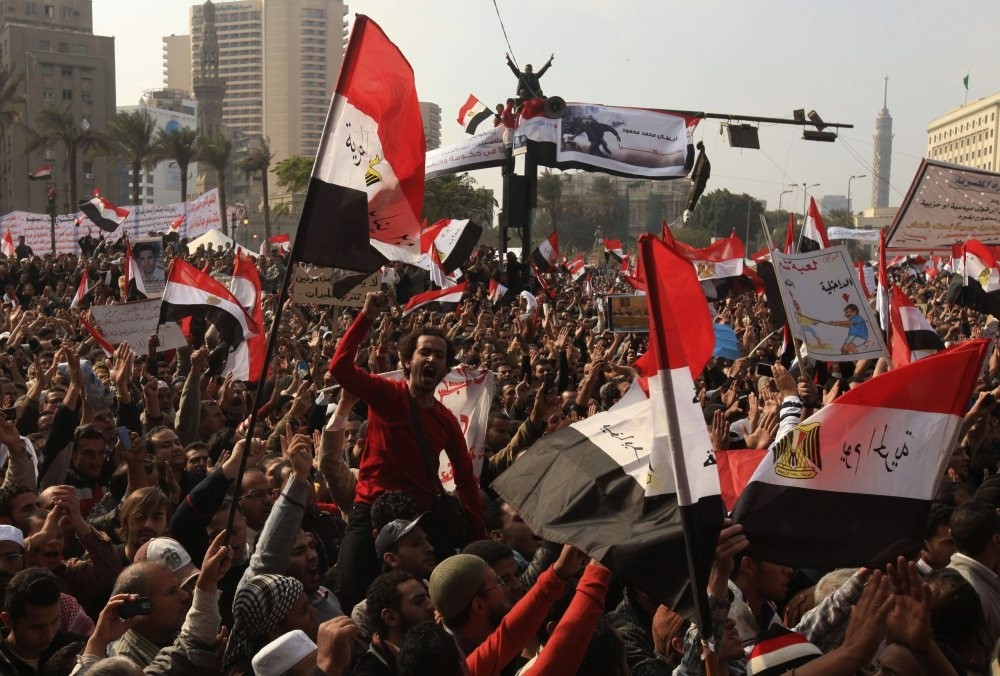 Protesters chant slogans against the Egyptian military council during a demonstration in Tahrir square, Cairo, Nov. 25, 2011.
by Ismail Numan Telci
Jan 26, 2018 12:00 am

Seven years have passed since Egypt's revolution in 2011. While the revolutionary process ended with a military coup in 2013, counterrevolutionary actors established a powerful authoritarian regime in the country. While the regime in Cairo has continuously inflicted human rights violations on its citizens, it has tried to establish strong relations with international actors to gain international legitimacy. Despite its active foreign policy, the regime of President Abdel-Fattah el-Sissi in Egypt suffers from widespread criticism in the country due to its harsh policies on civil activists, bad management of the economy and widespread human rights violations. Due to this tense atmosphere, Egypt has not been able to establish well-functioning governance that would enjoy peaceful coexistence of political actors, economic wealth, a flourishing civil society and the elimination of the cycle of violence.

This chaotic situation also impacts the upcoming presidential election. Because of fear for survival, the Sissi regime has increased its pressure on political opponents in the run up to the elections that will be held in March. To prevent the candidacy of possible future leaders in Egypt, the regime, omitting the methods widely used by Mubarak, has been utilizing the judicial and security apparatus to force these figures to not run in the upcoming election. The most recent example of this was the arrest of Sami Anan, a former chief of staff who had recently announced his candidacy for the presidential election.

The Egyptian regime's repressive practices have recently been targeting political opponents of Sissi's government. This has increased in the pre-presidential election process. The arrests of Sissi's opponents started in May 2017 with the arrest of lawyer Khaled Ali, who announced his candidacy early that year. Ali was later released on bail, pending trial. On Sept. 25, a court sentenced Ali to three months in prison for offending public decency. Following his appeal to a higher court, Ali's is still to be resolved. Sources report that if the guilty verdict is upheld, Ali will not be allowed to run, even if he is not imprisoned.

Another arrest of a presidential candidate took place in December last year, following Colonel Ahmad Konsowa's announcement of his presidential candidacy in a video on social media. Following his arrest, Konsowa was taken to court and sentenced to six years in prison on charges of "carrying out a political campaign, while his military service was in progress."

One of the most prominent figures in Egyptian political life, Ahmed Shafiq, has also been targeted by the regime. As one of the most important actors of the former regime, Shafiq gained large support from Mubarak-era actors after the 2011 revolution. However, following his defeat in the 2012 presidential election to Muslim Brotherhood candidate Mohammed Morsi, he left for the United Arab Emirates (UAE).

In late 2017, Shafiq announced his candidacy for the upcoming elections and returned to Egypt after a controversial series of events in which he was involved in the UAE. However, days after his return, Shafiq said that he no longer intends to run in the presidential election. This unexpected change in Shafiq's decision was attributed to pressure from intelligence circles in the country.

The final target of Sissi's hunt for opponents was former General Sami Anan, who served as chief of staff from 2005 to 2012. During his tenure, Anan played a key role in Egypt's relations with the U.S. and was considered as a close friend of the U.S. establishment. Because of this very strategic position, Anan's candidacy was considered the most serious challenge to Sissi's survival. Therefore, it did not take long for the regime to arrest Anan days after his announcement of his presidential candidacy. Anan's arrest could be considered an open message to both domestic and international audiences of the seriousness of the Sissi regime's eagerness to continue its hold on power in the coming years.

This heavy-handed policy against the opposition could also be explained as the fear Cairo feels for the coming presidential election. There is a high probability that Egyptian voters would prefer a candidate other than Sissi, as past records of the regime hint. Exclusionary policies at home, persistent attacks on freedom of expression, human rights violations and mismanagement of the economy have alienated Egyptians from the Sissi regime. Therefore, a free and fair election would result in Sissi's loss of power and the election of another candidate, whoever that person may be.

The main reason for Egyptians' disapproval of the Sissi regime is its unlawful practices and human rights violations. Since 2013, thousands of civilians have been imprisoned, most of them having been tried in military courts. Since 2013, the number of prisoners who have died in custody due to bad practices, medical negligence and torture has risen. Many international actors such as the U.N., the EU and U.S. as well as human rights organizations have condemned these practices. Despite campaigns to stop these human rights violations, no international actor has been able to stop the Sissi regime's harsh treatment of its opponents.

Another factor that alienated Egyptians and international actors from the Sissi regime is its attack on freedom of expression. In May 2017, the regime approved a new NGO law that attracted criticism both domestically and internationally. The law faced heavy criticism because of the complicated wording and restrictions on establishing new NGOs. Opponents argued that the new law aimed to stop the activities of all existing NGOs that are critical of Sissi's government. By obliging newly established NGOs with harsh requirements, the regime is trying to restrict the establishment of new civil society organizations. There has also been the criticism of provisions that brought strict monitoring of NGO funding both domestically and internationally. Following the approval of the NGO law, many international human rights organizations condemned it. Despite the criticism, the regime continues to uphold the new law.

Finally, the regime's oppressive policies have also affected the press, journalist, activists and human rights organizations. The long detention of two prominent journalists, Mahmoud Hussein of Al-Jazeera and Ismail al-Iskenderan, has continued. Both journalists were arrested on false charges such as making false news, creating chaos in the country and being a member of the Muslim Brotherhood. Two well-known, secular activists, Alaa Abdel-Fattah and Mahmoud Abou Zeid, known as Shawkan, have also been in custody for more than three years. The regime has also targeted media organizations. Last year, newspapers such as Al-Borsa, Daily News Egypt and Cairo Portal were placed on the terrorist entities list. All these organizations were later confiscated and put under the control of state-controlled media agencies. On May 2017, the Egyptian government started to shut down international news websites that had a critical view of the regime. Initially, access to 21 leading sites in the Middle East such as the Huffington Post Arabic, Al-Jazeera, Al-Sharq, Al-Arab Al-Jadeed and Mada Masr were closed. In the following months, the number of blocked websites reached 452. The Egyptian administration has also blocked access to the website of Human Rights Watch following the publication of the report "Torture in Egyptian Prisons."

Where is the revolution heading?

The Egyptian revolution of 2011 is now a forgotten phenomenon that struggles to live up to its initial target of democracy, rule of law, human rights, freedoms and a well-functioning economy. However, it is now certain that the Sissi regime poses a direct threat to reaching the goals of the Egyptian revolutionaries. On top of that, authoritarian policies, uncertainties in foreign policy and the mismanagement of the economy have contributed to the continuation of the chaotic atmosphere in the country. To put it more clearly, while the regime has gradually weakened its relations with the United States and is increasingly sliding into the political sphere of Russia, political and economic circles in Washington are seriously concerned. A possible economic collapse is also always on the horizon because of mismanagement of the economy and ill-mannered International Monetary Fund (IMF) reform packages. Finally, human rights violations in the country continue to face harsh reaction from domestic and international actors.

At this point, public opinion in the country is that the Sissi regime must change. It is also raising pressure on Cairo that Western actors, especially the U.S., have signaled that Sissi is dragging the country into greater chaos. However, Sissi will not withdraw his bid to continue his hold on power. To survive the regime, Sissi is determined to eliminate the possible alternatives by taking all the risks. It will be clear in a few months how successful this strategy is.