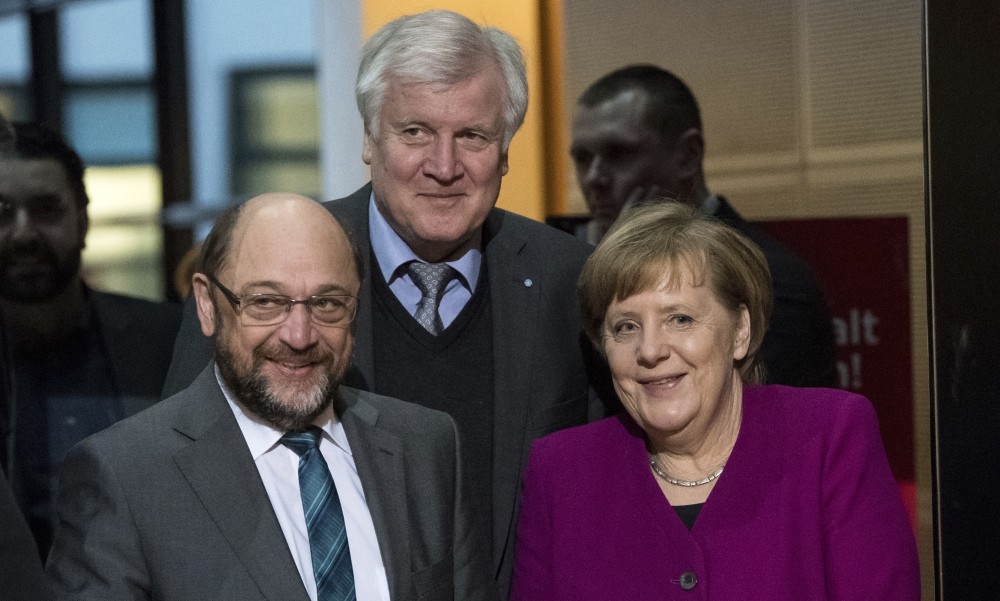 The German language has a rather fitting word to describe when someone stops in his or her proceedings and makes a sharp 180-degree turn: Kehrtwende. Similarly, in politics it is frequently used to describe a sudden, unexpected departure from previous statements or ideological positions. It is not to be confused with "retreat," as in to concede defeat or comparable to the meaning of the word "resign."

For many observers, it has a sense of positivity, a notion of being able to change one's viewpoint as and when required and whenever – political – wisdom so dictates: Someone went too far and, either voluntarily or more commonly by necessity, completes a U-turn. And exactly such a surprise move by leading German politicians is needed today more than ever. It would have laudable outputs, instead of continuing on a rather biased path. Hence, it has huge potential for a renewed Germany-Turkey classic win-win situation. Could there be a last-minute upheaval, no grand coalition? Well, frankly speaking, I don't think so.

One should be quite optimistic that this type of kehrtwende would be in the air soon after the Christian Democratic Union/Christian Social Union (CDU/CSU) and the Social Democratic Party (SPD) announced that they would begin talks on forming another "Grand Coalition." Even more so as the prospect of the Green Party under the now-failed Jamaica multi-party coalition project would be handed. The German Foreign Ministry had raised more than just an eyebrow and many of Turkey's friends and political commentators should have viewed it with great unease and nervousness to phrase it diplomatically. Jamaica is history, however.

Coming back to the previous paragraph, unfortunately the opposite happened after an extended round of initial negotiations: A 28-page policy paper emerged and Turkey was featured prominently, once again, in all the wrong places and contexts. Even before the future coalition managers sat down to put pen to paper and form their new government and decide who would head which ministry, we learned that they would put the current EU Acquis Communautaire chapter accession talks on hold. They would not discuss any upgrade to the Turkey-EU Customs Union and they would not allow for visa liberalization for Turks traveling to the Schengen zone either.

So, is a U-turn still a serious option then?

Absolutely. Another term that became quite famous in political circles in Europe – like kehrtwende – is "realpolitik"; no need for any translation here as it is regularly used as the Anglo-Saxon world for politics.

Realpolitik would imply that as the multi-color Jamaica experiment – which, according to most, would have led Germany into highly uncharted waters if not an outright stalemate, including another set of elections upon its expected collapse – is now off the agenda. Those current and very experienced coalition managers and later their chosen ministers for sure know about the importance of fair and pro-active bi-lateral relations between Turkey and their own nation.

On Jan. 12, the influential German economics magazine Wirtschaftswoche (www.wiwo.de) commented on the coalition talks saying under the sub-title "Umgang mit der Türkei" (How to deal with Turkey) that for the time being, EU accession talks will not be halted for good. The article went on by detailing that although SPD Chairman Martin Schulz and the CDU's sister party, the Bavarian-based CSU had asked for a complete end of Turkey's EU accession prospects toward the end of the previous election campaign, nothing of that sort found its way into the new coalition talks' first position paper.

Instead, the three points referred to earlier were stated. These three points are equally off the mark, yet they are a stark contrast to demanding the end of Turkey's EU vocation altogether.

It shows that there could theoretically be light at the end of the misunderstanding Turkey tunnel. Turkey did everything in its power to pave the way for another era of long-lasting, mutually beneficial bilateral relations. Now it is Berlin's part to respond favorably. Three pressing issues spring to mind, which would send a clear goodwill message to Ankara.

First, up until this very day there is a total misinterpretation of what had actually happened on that fateful night of July 15, 2016, when a terrorist network, which had infiltrated parts of the military, tried to topple the democratically-elected Turkish government and even tried assassinating President Recep Tayyip Erdoğan. This first issue is addressed to Foreign Minister Sigmar Gabriel. How would you have reacted if a similar attempt was made to destroy everything that the proud German democratic nation had built after World War II? What if the clocks were turned back to a nation of fear, a dictatorship? I am 100 percent certain Turkey would come to your aid – logistically, financially, perhaps even militarily within NATO – within hours after such an attempt to stand side by side with its German friend and ally.

Turkey was and is EU Acquis Communautaire ready

The next subject is EU accession. If you really believe that some issues need frank and fair discussing among friends and allies there is only one way to achieve this: Full EU membership for Turkey. The opening and closing of EU Acquis Communautaire chapters – the ever-expanding body of EU laws – is not the major thing; Turkey is ready to basically open and close all of them in a year or two; Turkey was and is "EU ready." The Turkish EU Ministry told me this on the record at one of my university guest lecture classes 10 years ago but Brussels does not want to listen. It had actually decided that only three acquis chapters (2005) have an extended list of benchmarks Turkey might have difficulty in complying with fast. Friend and ally Germany, even back then, simply did not push the EU hard enough to welcome Turkey. Visa liberalization and upgrading the Customs Union now would be two clear signals that Turkey is actually welcome, wanted and at home in Europe.

And then there's the PKK. Although some days ago a member of the European Parliament (not a German member of parliament and I refuse to give that politician anymore publicity hence I am not writing his name) declared that the PKK is not a threat to Europe terror, it has since gone global. The PKK terrorists strike everywhere. Turkey fighting the PKK makes Europe a safer place. Until the PKK is taken out for good, it will be a threat to Europe as a whole and not just to Turkey. So why would a European democracy such as Germany allow PKK sympathizers intent on destroying Turkey, and probably any other democracy, to freely meet and demonstrate and shout slogans in favor of terrorists? Why would Turkey's close friends in Europe not join forces in Turkey's fight against the PKK and make it a joint fight everywhere?

Three timely gestures from Berlin could go a very long way in Turkey. I sincerely hope that the next commentary in leading German and international newspapers will read, "Bilateral relations back on track, Turkey did what it could and so did Germany."