Who benefits from EU-U.S. economic rivalry? 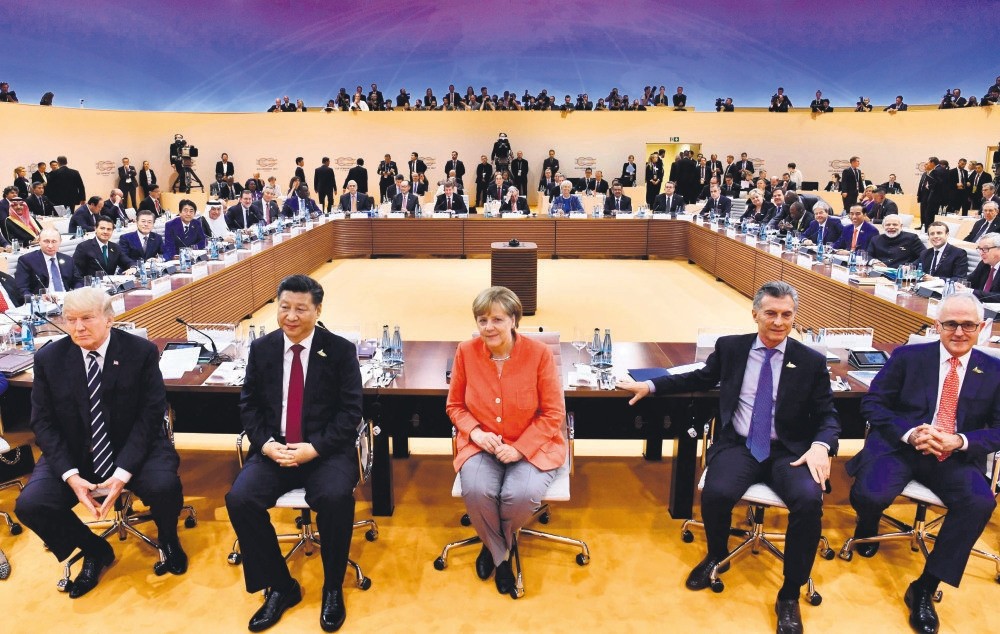 The winner is already clear in the U.S. versus EU battle, and the footsteps of the dragon are rising from the Far East

The tension between the U.S. and the EU, which is in pursuit of an independent military and commercial freedom once again, has reached a completely different level with U.S. President Donald Trump taking office. The Common Foreign and Security Policy (CFSP) request, first established in 1992 with the Maastricht Treaty, was then resolved with the Amsterdam Treaty in 1997 along with issues such as a common foreign and security policy.

The fact that Germany, the EU's steam engine for the past 10 years thanks to its exports in heavy industry and technology, has caused the U.S. to gradually drop behind in the race for trade surplus. This, along with capital transfers China has made to eastern Europe, has caused this arm wrestling to be felt in the Far East as well as Europe. The situation the United States has experienced recently of not being listened to is one of the leading factors causing the country, which managed to preserve its economic strength with the Truman Doctrine and Marshall Plans during the Cold War, to act more aggressively especially in commercial agreements.

Although we cannot talk about an integrated Europe, it is not in vain that the bloc has moved toward France, Germany and Italy in recent years. The legal resistance Italy, Spain, Portugal and Denmark, along with the U.K., which never deviates from U.S. policies – the countries that have worked to stymie France and Germany at the end of the 1990s, so to speak – have shown opposition to U.S. companies both in NATO and trade agreements. This is the biggest sign that the future will only get more bitter.

As everyone will recall, Volkswagen's loss in the crisis that erupted after the company admitted it had installed emissions cheats on the diesel vehicles it manufactured in the U.S. is estimated at $17 billion. This penalty, which is justifiable from an environmental perspective, was not the case in Europe. After U.S. carmakers left their market shares to Japanese manufacturers, this would surely be a pretext for companies such as VW, Mercedes, BMW and Seat to have a free hand in North America in recent years.

U.S. institutions, which are trying to bring the EU into line with financial sanctions, continued to punish European banks between 2014 and 2017. Credit Suisse, one of the European financial institutions that had to pay close to $40 billion due to the London Inter-bank Offered Rate (LIBOR) and Euribor's trading irregularities, in an inquest in the U.S. was the largest bank to have been found guilty in the past 20 years, and was fined $2.5 billion for helping Americans evade taxes.

After that, the U.S. Department of Justice ordered French bank BNP Paribas to pay an $8.9 billion fine to end the investigation launched on suspicion that the bank violated the sanctions imposed on Iran. BNP allocated approximately 2.7 billion euros for litigation and legal penalties on its balance sheet. Again, French Credit Agricole and Societe Generali were also investigated by the Manhattan District Attorney for violating the sanctions on Iran. The $14 billion fine U.S. officials, who also fined German giant Bosch, issued for Deutsche Bank was the final straw.

The EU responded to these fines with tax evasion fines. EU institutions fined Apple 13 billion euros for evading EU taxes. Then, they fined Microsoft $731 million for not providing its customers internet browser options other than Internet Explorer. Then it fined Microsoft another $2.1 billion over similar infringements and Intel $1.2 billion for the same reason. The EU reacted harshly when the U.S. launched an investigation into European companies based in the U.S., which was quite annoyed by the EU's fines. Following that, the CEOs of 185 U.S. giants threatened the EU. Finally, Margrethe Vestager, the European commissioner responsible for competition, responded to these threats from185 companies with EU investigations of their own.

As one can see, the euro's battle against the dollar is the most relentless in recent years. Notably German Chancellor Angela Merkel and French President Emmanuel Macron's declarations of the EU's priorities after Trump's "America first" rhetoric, and especially the unexpected response they gave to the Jerusalem issue, as well as the Vatican stepping in, gives clues about where this political and economic competition can go. Amid these discussions, then French Finance Minister Michel Sapin's remarks that, "currencies used in global transactions must now be balanced, it is possible and necessary to establish a balance again, and the time has come" has shown that this 70-year alliance is on its last legs.

The U.S.'s efforts to diversify its shrinking domestic market via China have become an extra problem for U.S. trade deficit troubles. Despite acting on liberal and democratic arguments in its foreign policy, the U.S.'s softening stance on China, especially due to its autonomous trade and low labor costs, has been a major influence on the country's foreign policy and hardening stance toward the EU.

The point that the EU and China share is the continuity of economic sanctions, which are the basic indicators of political power, and the desire to become hegemonic powers. In this respect, it should not be surprising for these black clouds the U.S. has caused to form above Europe's skies to turn into a big storm. In an environment in which the U.S. is embracing China's containment and security policy, the fact that the biggest European producers are setting up new centers in China and hence changing the flow of capital will only add to the powerless dollar's desperation in its battle against the euro.

The far right, the rise of which has been fueled by economic problems in Europe, and their desire for closer relations with China and Russia instead of the U.S., is important for the EU, which is currently implementing liberal policies, to be more moderate. It seems difficult for Trump to notice the damage the American protectionism he pursues in his economic policies will cause to his transatlantic relations in the long run. It is a bit early to predict the harm economic policies that have not taken a lesson from the past will cause to countries.

As Napoleon Bonaparte once said, "China is a sleeping giant. Let her sleep, for when she wakes she will move the world." His remarks are almost a sign showing where all these problems began. In the U.S. versus EU battle, the winner is already clear. The footsteps of the dragon are rising from the Far East.* Ph.D. researcher in the Private Company Economic Research Department MENA at the Swiss Business School