Turkey's concept of state as role model for the Arab world 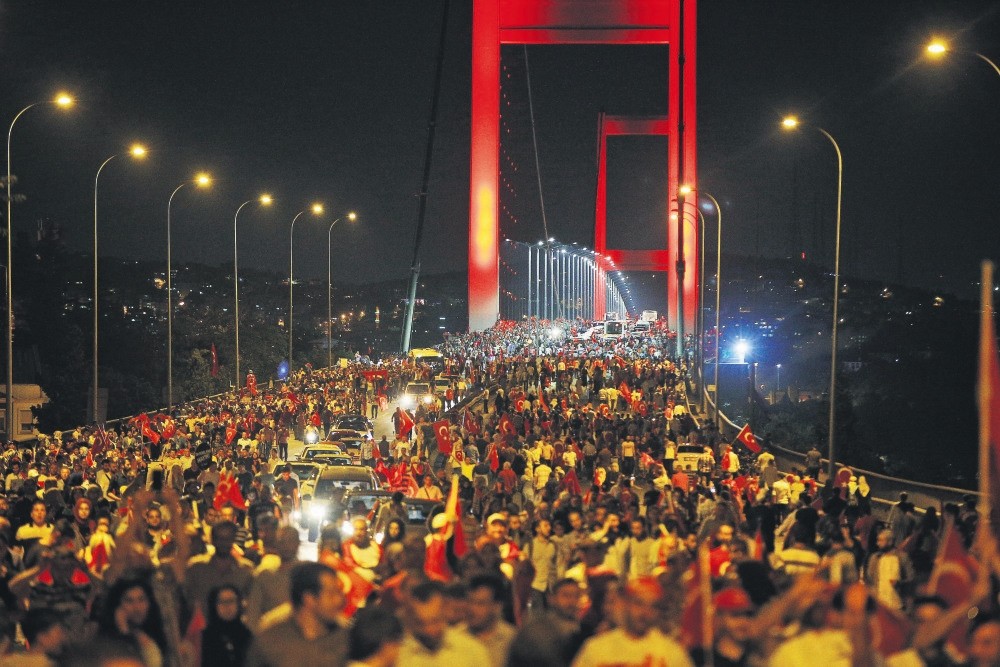 The Middle East of today is being pulled in opposite directions by two forces vying to define the sociopolitical identities of its communities. The first is the state with its central powers and institutions, and the second is represented by a myriad of fractured groups, or militias, that do not fall under any central, state control. While the scene is increasingly perceived as a consensus point, the details remain missing or unexplored at best.

The response from Turkey's people to the attempted coup on July 15, 2016 represented a new phenomenon in the relationship between the people and their political governing system. By going out to the streets to face the coup attempt and remaining there for weeks, refusing to return to their homes until they were certain that the dangers threatening the political, social, judicial and military reforms carried out by their elected government were over, they underlined a number of fundamental points:

• Defense of the state, its institutions and structures;

• Defense of a political system that represents the best available option for running the affairs of the state, regardless of political differences and viewpoints;

• The exposure of new attempts by a new generation of minority interests trying to overtake the functions of the state and undermine its stability; and

• The central state and its institutions are the focal point around which society can unite.

These fundamental points are exactly what Arab societies were concerned with in the period spanning the Arab Spring, with consequences impacting Turkey's national security. The central states in many Arab countries such as Iraq, Syria, Lebanon and Yemen had collapsed, and these societies are now living under rival, anti-state structures.

Turkey has more in common with its neighbors now that it did during the Ottoman era. It shares a common future with the region in all its ethnic and religious diversity. That future is either one of survival represented by the central state and its role as protector of society, or one of annihilation represented by the opposite structure that would dismantle the state and paralyze civic life.

If we accept that the struggle for survival is among the most basic of human instincts, then what took place in the main squares of Turkey's cities was a reflection of the battle for survival raging all over the region. In that sense, the reaction to the 2016 coup attempt represent a new concept of regional citizenship based not on traditional ideas of ethnicity or religion limited to certain geographic parts of the region, but on an idea of the state shared across all communities and all parts of society. These events represent a new phase in which the region is regaining confidence among its various communities and societies after more than two centuries of a downward spiral of political decay and a determined international project to dismantle it as a political and social bloc. The most important feature of this new phase is that it is the result of spontaneous popular convictions and not the outcome of political agitation.

Global coup-making institutions have not received this new popular persuasion favorably, as it emphasizes at least three important notions of security – the belief in the idea of the state in society, the willingness to defend this state and the relationship between these new convictions and the region. It symbolizes an idea that brings common benefits to all and defends the interests of all – something that deserves fighting for, i.e., the idea of the state. This relationship is represented by burgeoning, regional civic society present in all major political blocs as a safety valve for preserving political stability.

However, this deeply significant phenomenon – the first of its kind since the region took its current political shape after World War I – have remained at the margins of attention. Studies have focused on the security, political, economic and media connections of those attempting coups with no consideration of the wider implications in a region lost at sea and searching for a new beginning that such an extraordinary event demands and deserves.

It is not unfair to say that the events of July 15 caused audiences all over the Arab region to be glued in front of their televisions until the early hours of the morning, waiting to be assured of the preservation of the state in Turkey, having spontaneously realized the nature of the struggle between the centralized state and the state of the militias have not received its deserved share of specialist analysis and study. It is this serious study that can and will translate the events of July 15 into a road map for regional transformation, changing the events from mere political and security developments into living ideas that enrich all societies in the region.

It must be emphasized that the transformative achievements of the reform movement in Turkey that touched all aspects of life and state and remedied in one decade the legacy of one century of political and cultural failure under a system protected by the military and the Constitution was deeper than those brought by the French Revolution, which did not challenge the overall cultural or religious norms of society.

Turkish reforms have also been wider in scope than the Chinese experiment, which corrected three decades of mismanagement – an experiment in which the reforming authority and the previous failing Communist Party regime are one and the same, and with absolute, unchallenged powers. More significantly, Turkey's severance from its cultural values had lasted longer than in China. Unlike China, no one in Turkey's reform generation had been alive when the decline began to set in, making the task harder and worthier of study in the correct theoretical understanding, so that Turkey's neighbors can accept the experience as their own.

It is also worth mentioning that, despite the recent colossal successes of China's economy, very little print area is dedicated to this part of China's reform policies. Most attention is given to the intellectual and rational framework within which these reforms were carried out. Namely, how and why did this approach create a third way for running the affairs of the state, straddling the two extremes of communist despotism and unchecked liberal freedoms. Books and academic studies focus on the choices that China made for itself – choices that meet China's needs and requirements and are in harmony with its Confucian past.

Before we ask school children in Baghdad, Riyadh, Damascus and Cairo about why Turkish people reacted to the coup attempt the way they did, we need to come up with some answers ourselves. Europe's answers were ready and revolved around the long-term crises afflicting European society, like the oppression of the masses by an elite class of clergymen, landowners and nobles. We, on the other hand, need to come up with urgent answers to some very unfamiliar questions about the fall of the central state, a structure that for centuries was the dominant sociopolitical edifice under which our identity was formed. The state to our societies is like water to a fish, and without it we lose our collective and individual composure, embarking on a sure path to chaos. This is true whether the state has its center in Ankara, Baghdad or Damascus.

It was poets, writers and intellectuals, later followed by the people, who called the events of July 14, 1789 a revolution. After 100 years of its current political map, our region has a fateful date with long-overdue reforms. The region has suffered political and social systems that have made it easy pickings for foreign sociopolitical ideas. Our need in 2018 for a strong Turkey is greater than Europe's need for France in 1789. And, just like the making of the French Revolution did not actually take place on July 14, 1789, the making of the revolution in Turkey took place before July 15, 2016.

There are no books yet with titles such as "Turkey's Long March toward Rule of Law." Such books would and should include chapters on Turkey's economic reforms, and its transformation from a poor to a rich country, the development of state institutions and the rule of law, the military's retreat from politics, co-existence between religion and the state, the re-drawing of the political map of the country, minority rights, reform of the legal system, independence of the judiciary, putting an end to corruption, social care, devolved local government and other topics.

The book that you will find is "China's Long March toward Rule of Law." This is read throughout the world, and includes sections and chapters almost identical to what needs to be written on Turkey's own reforms. The title of this column remains unexplored. Our revolution still awaits the political theories needed to build our civic, regional society and protect our central state, following in Turkey's footsteps.

*General secretary of the Mosul Foundation (NGO), researcher in Turkish-Arab relations, regional strategic affairs and the reforming of the modern nation-state in the Middle East