The Turkish-Armenian conflict and the 'Wildersization' of the Netherlands 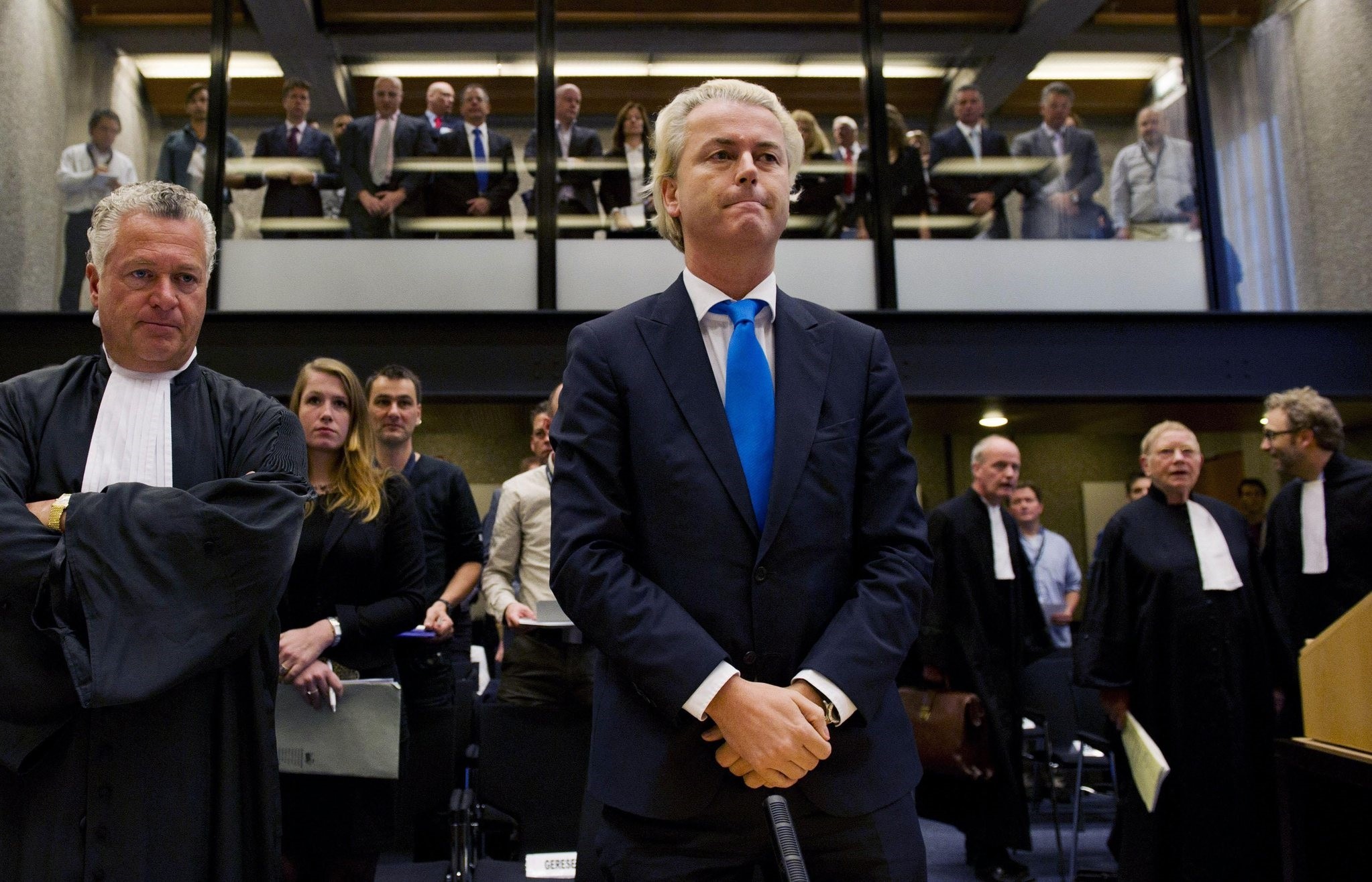 In sharp contradiction to the lessons of human rights, certain politicians want to teach to Turkey, the resolution in Dutch parliament actually tramples on basic legal principles and ignores the European Court of Human Rights case law

The adoption of two resolutions at the European Parliament endorsing the "Armenian genocide," claims provoked in Turkey protests that are more than understandable. Indeed, a parliament that uses, or rather misuses, the issue of human rights toward Turkey has actually violated basic legal principles. First of all, a parliament is not a tribunal: Endorsing a specific legal label violates the principle of separation of powers. These resolutions are also against the principle of the non-retroactivity of law: The crime of genocide was defined in 1948 (not by Raphael Lemkin, as it is sometimes claimed, but by the U.N. and against the vague definition promoted by Lemkin). The way the Dutch parliament behaved also trampled the right of anybody to present his defense.

Regardless, the most obvious contradiction between this resolution and human rights is the contradiction with the case law of the European Court of Human Rights (ECHR) itself. Indeed, in the Perinçek v. Switzerland case, the second chamber of the ECHR ruled on Dec. 17, 2013: "In any event, it is even doubtful that there could be a 'general consensus,' in particular a scientific one, on events such as those that are in question here, given that historical research is by definition open to debate and discussion and hardly lends itself to definitive conclusions or objective and absolute truth." (§ 116). Then, in confirming this decision, the Grand chamber wrote: "He [Doğu Perinçek] took part in a long-standing controversy that the Court has […] described as a 'heated debate, not only within Turkey but also in the international arena." (§ 231).

Imposing a kind of official history, denying the existence of a debate affirmed by the ECHR, is a completely anti-democratic - not to say totalitarian - behavior, and it may have concrete consequences, in encouraging censorship and self-censorship in academia and the media. It is not speculation: As late as November 2016, the Armenian Youth Federation (established in 1933 by Garegin Nzhdeh, an admirer of Hitler) physically prevented professor George Gawrych from delivering a lecture at California State University, Northridge - a lecture that was not even about the Armenian issue but about Mustafa Kemal Atatürk.

Besides these observations of principles, it must be noted that the vote of 2018 is in formal contradiction with the stance of the same Dutch parliament as late as 2015-2016, when its official position was precisely to refuse to express an official position. Those who voted for these resolutions have not even the extenuating circumstance of a being citizens of a country where anti-Ottoman, anti-Turkish and anti-Muslim propaganda have been strong for more than a century. On the contrary, the Dutch press of the 1910s tried to be fair and balanced regarding the Turkish-Armenian conflict, including reporting about the massacres of Turks and other Muslims by Armenians of the Russian army in 1918. Correspondingly, at the beginning of 1919, the Ottoman government asked the Dutch state to create (with Sweden, Denmark and Spain) a commission of inquiry regarding the mutual accusations between Turks and Armenians. The project failed as a result of the pressure exerted by the cabinet of David Lloyd George.

As the vote is not a long-term consequence of an old anti-Turkish tradition as it exists in the United States, for example (see Justin McCarthy, "The Turk in America. The Creation of an Enduring Prejudice," Salt Lake City: University of Utah Press, 2010), what exactly is it? The main reason is that the Netherlands has been the first country to experience, at the beginning of 2000s, the development of a new far right called by historians and political scientists "neo-populism," namely a far right that affirms to have no connection with the far rightist regimes of the 20th century and presents herself as the shield of women, LGBTs, etc., against an "Islamic totalitarianism."

The Dutch neo-populism is not only the first, but the most extreme example of "neo-populism," not only in the wording of its hostility toward Islam, but also in its obsession against the Turks. Indeed, in January 2012, Marine Le Pen unequivocally criticized the Boyer bill, that wanted to ban any criticism of the "Armenian genocide" label and that was censored by the Constitutional Council in February of the same year for being a serious violation of freedom of expression.

She even added that Recep Tayyip Erdoğan was "right to tell France to mind its own business" and refrained from using the words "Armenian genocide." Correspondingly, the Swiss People's Party (SVP; UDC in Romandie), whose anti-Islam rhetoric is well-known, made a U-turn in its position toward the Armenian issue during the last decade, supporting the freedom of expression of Doğu Perinçek and publicly stating that the 1915-1916 events are a matter of debate.The anti-Turkish hostility in the Netherlands is particularly remarkable, as the Turks have a low criminality rate, unlike the Moroccans. Using the high criminality rate of immigrants from the Maghreb, and even more of their children, to attack the honest majority of them is unfortunately common and well beyond the limits of the Netherlands, but for the Turks and their children, even this pretext does not exist.

Yet, the ideas of Geert Wilders are increasingly mainstream in Dutch politics, and his quasi-acquittal in an affair over hate speech against immigrants in 2016 can hardly improve the situation. The most recent example of this "Wildersization" is of course the way the Dutch authorities behaved towards Turkish ministers during the campaign for the Constitutional referendum of 2017 - in striking contrast with the absence of incident in France. It reveals an incapacity of the Dutch elites to resist the temptation of demagogy. It may have serious consequences. Indeed, each time, since 1960s, a party in power tried to use anti-immigrant rhetoric, that party sooner or later provoked a transfer of votes at the benefit of the far right.

Chronologically, the first case was the xenophobic rhetoric of the British Conservative Party (the most striking example being the speech of Enoch Powell in 1968) that initially attracted votes but eventually helped the British National Front (BNF) during the 1970s. The BNF's rise was limited, partly because it exploded into rival organizations, partly because the British Conservative Party leadership, and particularly Margaret Thatcher, managed to push Enoch Powell out of the party. On the contrary, the focus of Nicolas Sarkozy on national identity and Islam during the presidential campaign of 2012 did not work at his benefit but rather helped Marine Le Pen. On the issue of the transfers of votes, see Jean-Yves Camus and Nicolas Lebourg, "Far-Right Politics in Europe," Cambridge (Massachusetts)-London: Harvard University Press, 2017, pp. 180-209 (translated from French by Jane Marie Todd).

From verbal to murderous violence

That having been said, an electoral rise of the far right is not the only possible consequence of the anti-Turkish stance of the Dutch state. Indeed, in the manifesto of Anders Breivik, the far-right terrorist who killed 77 people on July 22, 2011 in Norway, it is crystal clear that his main inspiration was Geert Wilders. Yet, the reaction of the Dutch far-right leader was pure and simple denial: For him, Anders Breivik is just "a psychopath," a word obviously aimed to refuse, or at least to attenuate, the political dimension of the terrorist attacks. Even more seriously, the anti-Turkish hostility in general and the misuse of the Armenian issue in particular are essential in the ideology developed by the Norwegian terrorist: His manifesto, one more time, is very clear in this regard.

It is not difficult to understand why, as both the Ottoman Empire and the Turkish Republic raise a considerable problem for him: The Ottoman state secured civil equality for non-Muslims in 1856 (by comparison, Romania emancipated its Jews in 1919 and Spain its Protestants in 1876); the Turkish Republic is an example of secular democracy with a Muslim majority. Distorting Turkish-Armenian history becomes, as a result, indispensable for his more general attack against Muslims.

Yet, Anders Breivik was called a "hero" on two Armenian TV channels, mostly because of his support for the "Armenian genocide" label and for his fierce hatred against the Turks (see Yeghisheh Metsarents, "The Criminal on Armenian Television," Lragir.am, July 27, 2011). On the other side of Europe, the number of racist acts in the Netherlands increased from 2,189 in 2013 to 2,764 in 2014.It is impossible to say if the Breivik-styled far right and those who regret that the attacks of Armenian terrorist groups (ASALA and JCAG) ended during the 1990s will converge, but the vote at the Dutch parliament certainly does not help to attenuate this risk.