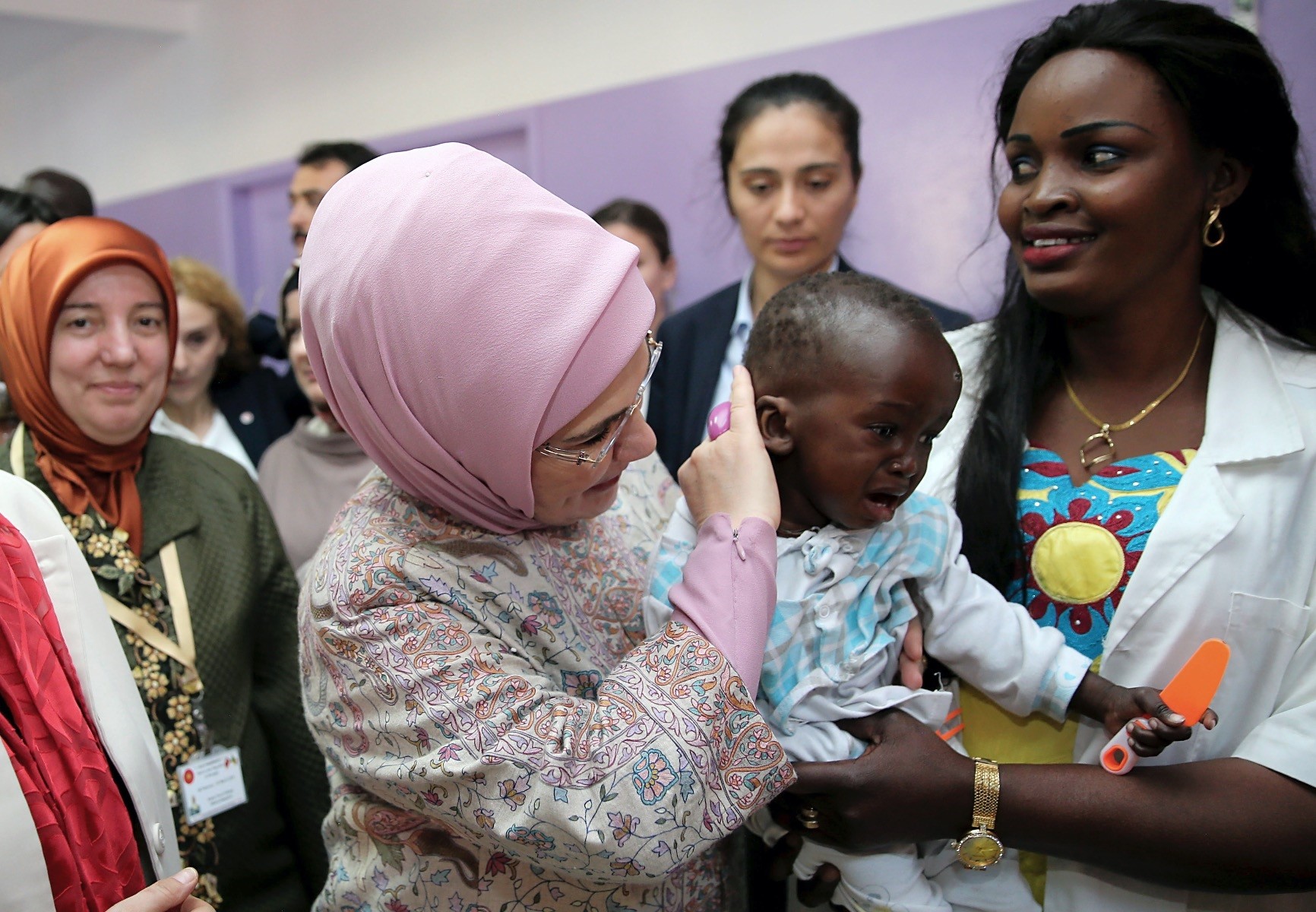 Turkish first lady Emine Erdou011fan gently caresses a Senegalese baby during her visit to a Turkey-sponsored school in Dakar, March 1.
by Fatima Abushanab Mar 12, 2018 12:00 am

The French and British colonial legacy has left many bitter memories of repression and oppression across Africa. Many Westerners do not see a necessary reason to rehash some of these scornful experiences. However, we need to be mindful about the fact that our current reality is shaped by our past struggles and our everyday politics. It is precisely for this purpose of social and political inquiry that we must look into the policies and perspectives that led to a calculated downfall of Africa in the hands of merciless men.

In the literature, imperialism as defined by the following descriptions and can give us a glimpse of the horrors of colonialism in Africa. For Lichtheim, imperialism is an extension of extreme nationalism where not only cultural peculiarities are imposed top-down, but indigenous people are indoctrinated into religion and language as sine quo non for westernization. This can be understood in the context of Fieldhouse's definition of how modern imperialism became a product of national hysteria taking the form of grotesque fascism. Baumgart argues that imperialism is about great power policies aiming purely at power and subjugation of local peoples. Winslow described imperialism as neoliberal economic policies by industrial nations. According to David Landes, the control and enslavement of African peoples by Westerners led to the "weaker parties to never acknowledge inferiority due to moral humiliation."

The degradation of African countries was worsened and made sure that their deterioration continued as their capacity for growth was kept in check. Wallerstein's world systems theory provides a clear perspective in the way the global South has become a marginalized economic zone in the world economy. With the advancement of new technology, transportation and diversification of trade the core countries of the West developed as the periphery of the global South became exploited for cheap goods. The core countries then drew a new sphere of economic influence called the semi-periphery as a middle ground for capitalist investment. The semi-periphery became a balancing, control mechanism between the core and the periphery. Some scholars, objecting to the exploitation of the global South, challenged this injustice with sound arguments.

Ricardo draws attention to the inequality and stated that free trade benefits the core and slows the development of the poor countries. In 1929, Mihail Manoilescu looked at the situation of Portugal's decline due to open trade with England and said that agricultural countries should close themselves from the capitalist market. He saw this as a solution to push the core to restructure international economy as a way that does not only benefit the few, but at the same time allows all to prosper from the economic pie. Emmanuel argues that in order to mitigate the effects of unequal exchange, the periphery should set the rules and guidelines on taxing imported goods and to increase diversification of production.

After this comprehensive introduction, the question I would like to pose today is whether African countries are able to trade goods based on their own terms. In the Marxian sense, is production between the core and the periphery based on relations of (modern) slavery or reciprocal collaboration? The latter option is certainly not the case given the reality of exploitation and the subjugation of strong states over weak states. Looking at Africa as a case in point allows us to evaluate pan-Africanism as an attempt to disengage and become self-reliant. Going back to the "community of knowers" again, Grugel and Hout argue that this strategic calculation failed due to lack of power to deal with uneven distribution of costs and benefits, institutional deficiencies, corruption and regional conflict. Normally, regionalism is a project that aims at reorganizing geo-economic spaces where actors inside states push for integration. Integration allows for mutual gains and cooperation as a more viable option than unilateralism. The pan-African movement symbolized this solidarity where stages of regionalism initiated with the Organization of African Unity (1963) demonstrated an anti-colonial role. Stages of regionalism include free market zones, customs unions, a common market and economic union leading to economic and political integration.

Yet, Africa faced a major obstacle by the very Westerners who for centuries utilized their resources. How? Hegemonic institutions such as the World Bank, the World Trade Organization (WTO) and the International Monetary Fund (IMF) used structural adjustment programs (SAPs) as a way to deter developing countries from advancing their states so they could support a free market in their own countries with rules and regulations. Ali Mazrui defines the African dependency on the West we saw in the recent past and today as "pseudo-imperial interdependency." Santos describes this dependency as the development of the core countries at the expense of others. Furthermore, Mazrui, sheds light on the future of the unjust subjugation of African countries, warns against re-colonization under humanitarianism and called for the establishment of an African Security Council (ASC).

Turkey's role in boosting an Africa that is democratic and independent of exploitation requires leaders to break free from fear. The role of Turkey in providing moral support and deals that provide economic exchange on equal footing demonstrates the importance of a regional power. We can contextualize Turkey's approach to Africa in Evans and Grant's description of behavior that is based on "credibility, cooperation, capacity, creativity and coalition building." We cannot lose sight of the fact that Turkey's support for Africa's rejuvenation and independence from modern colonialism in the form of economic-trade subjugation encompasses political and military security in the fight against terrorism. After all, as Balibar says: "Emancipation is the struggle to enjoy rights declared by a democratic society."

If Western countries continue to tie down African countries economically, militarily and politically, how then can we expect democracy to flourish and enable a strong and autonomous Africa?

As Flockhart argues, we are in the making of a multicultural future with diverse regional subsystems that are globalized and localized at the same time. Acharya proposes the emergence of a "multiplex world" with a de-centered architecture with more roles taken by regional governance that tackle common issues like humanitarian crisis, climate change, terrorism and financial cooperation. Buzan and Lawson argue for a "multi-order system" and contend that inter-organizational entities like the European Union, African Union and Association of South East Asian Nation (ASEAN) will have growing influence across borders. These second-order systems are not individual, but collective entities that comprise states. The geostrategic region of countries will become more expansive and fluid in the very near future, as we will witness identity becoming more paramount than the region itself. Why should we not see Turkey take a role in the African Union while at the same time become a member of the European Union?

In the re-making of a liberal international order, idealism should not be overlooked. Democratic principles, human rights, fights against terrorism and economic development are all essential for countries to prosper. Hence, idealism subordinates power to institutions and promotes legal rights and peace to tackle such issues. But what happens when the institutions founded by the West cater only to the West and expand and enrich the core while purposefully leading to the decline of the rest? That is not a liberal international order. This is forged propaganda that is used as a sham to concentrate power and wealth in the hands of a few.

Echoing Foucault, if we are to "write the history of the present," we must look no further than ourselves, because as Ashley says, "modern state craft is modern man-craft." It begins here with all of us at home in our world.