Future of Italy after March elections 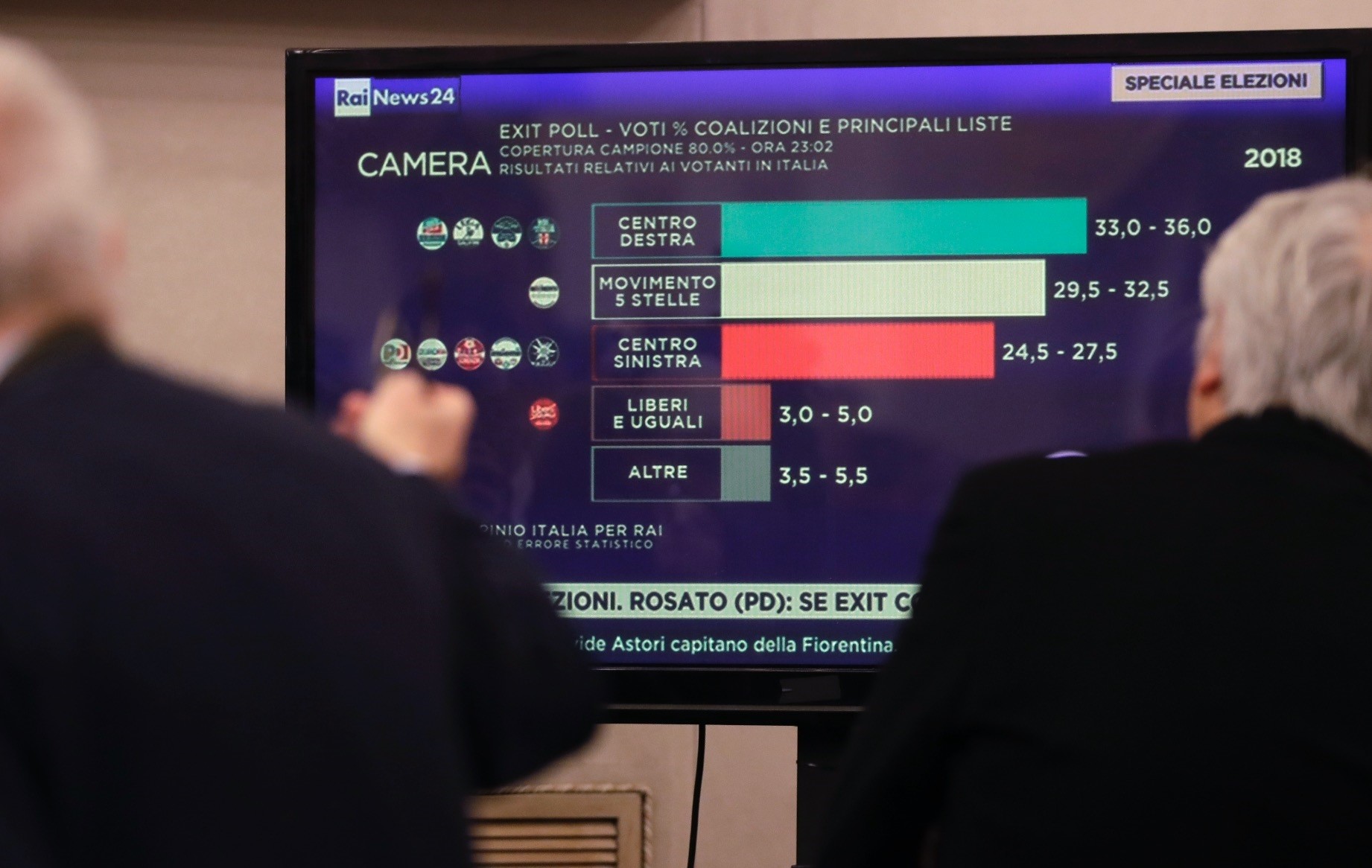 Journalists look at the first exit polls after polling stations closed at the electoral headquarters of the Five Star Movement, Rome, March 4.
by Valeria Gianotta Mar 13, 2018 12:00 am

On March 4, Italians were called to cast their vote in a new electoral turn and perhaps the most peculiar in the recent history of the country. As many experts were expecting, the results did not give a clear winner even though only one party, the anti-establishment 5-Star Movement (M5S) got the greatest percentage of votes (33 percent) without gaining the parliamentary majority.

On the other side of the political spectrum, the center-right emerged as the biggest coalition (37 percent) with Northern League (NL) as the leading force, immediately followed by the evergreen Silvio Berlusconi's Forza Italia (FI) and the far-right Fratelli di Italia, while the center-left group appeared as the main loser (22 percent). Since Italy has recently approved a peculiar election law, Rosatellum, which is a sort of mixed majoritarian and proportional system designed to reduce the fragmentation for the advantage of coalition parties, out of the ballot boxes the political environment of the last days has been dominated by harsh rhetoric, confrontation and hidden pacts presaging that making a grand coalition in the hung parliament is not an easy task. According to the law, while in the Senate once the high barrage of the first ballots is passed – the center would have the numbers to elect a president, in the parliament, where the majority is needed – the M5S would require some support from the others.

Paradoxically, the Democratic Party (PD) can oppose the creation of any government, because neither the two biggest has a majority, and still the changing rhetoric within the center-right block reveals a new balance of power. The NL's Matteo Salvini strengthened by the consensus extraordinarily taken in the south is no longer just the secretary of the party or the candidate premier, but he became the leader of the center. Although until a few years ago Berlusconi has been able to affect the internal games of the NL, nowadays the FI founder declares himself just as director of the whole group. It means that all three parties composing the coalition (NL and FI) may eventually adopt different strategies once consulted by the president. This is the brick of Third Republic. And most probably it will be an unstable and a non-governable one.

Therefore, it is up to the head of the state to address the political conundrum.Indeed, Sergio Mattarella has the task of ensuring stability for Italy by creating an executive supported by sufficient numbers. It is certainly a difficult path, but the only one that can be walked through. What is sure, however, is the dark side of those elections. On March 4, the traditional Italian politics was over. The right and left division almost no longer exists and they left the stage to internal completion and protest behaviors. The protagonists have changed and the electoral geography of the country has changed as well, for different reasons. The defeat of the center-left and the critical rise of some anti-establishment and populist programs not only shows the dramatic disillusion toward the traditional political rhetoric, but also a concerning regional divide.

The center-right confirms it is very strong in the north, but it equally proves to be relevant in the center and in the south where the M5S is dominant in riding the protest against the old ruling class by proposing a so called "reddito di cittadinanza [income of citizenship]" as a solution to mass unemployment, especially to the youth. As Italy is still financially and economically struggling, the public tension in dealing with the migrants' influx has strongly affected the result. Immigration has been the main issue in the electoral campaign since Italy as a Mediterranean border shore is directly experiencing the migrant crisis.

The right parties and M5S have a strong approach toward the issue therefore the performance has to be read mainly in the name of immigration, security and tax revolt. It is in interesting to notice that in any agenda there is no evident reference to foreign policy, which is symptomatic for a country with different interests and several axes. In other words, it seems that we are facing an epochal crisis of ideas where long-established parties are recognized as elitarian if not as a pure power machine. It was clear in the "fascist" or "communist" electoral slogans are historical categories mainly belonging to the past: It happens that ideology aims to fulfill the vacuum when parties in their main accountability function lack a vision. Likewise, the expressed preferences are not votes of belonging but protests toward a politics which has been disconnected from the citizens for too long.

The PD and its leader Matteo Renzi paid the highest price for this. Unlike all other parties, the support to PD appears to be confined to the upper-middle class configuring the party as an elitist one with a special focus on topics such as technological innovation, civil rights, European integration, globalization, and more generally with an optimistic narration of the economy and contemporary society. Inevitably, the mass feeling threatened by the negative effects of these transformations have not perceived the PD as a party able to listen to its demand. On the contrary, abroad the support to the PD managed to contain the fall: worldwide the center-left coalition stands around 26.5 percent while the center-right gained 21.5 percent and the M5S 17.52 percent. The trend has been confirmed in particular in Turkey where the PD has emerged as the first party (32 percent) followed by the center-right alliance (27 percent) and the M5S (21 percent).

Moreover, the center-leftist and Europe got 10 percent, recording double points comparing to the total foreign constituency. Definitely the comparison between the foreign constituency and the national vote certifies a significant gap between the Italians living abroad and the voters in Italy, but it obviously shows that a national strategy which ignores the weaker classes inevitably leads to a radical restriction of consensus.Yet, it is not clear whether Renzi's announced resignation will occur by marking a final exit from the stage or if personal ambitions will prevail in a new political battlefield. However, we are at the beginning of a new phase: The Italian tri-polarism, where no party and no coalition has enough support to govern in solitude and severe doubts about the anti-immigrant extremism and anti-Europeanism remain. It is a dividing tri-polarism into regional blocks that may add complications to the current fragmentation, if the next government will not have the ability to prevent any further collision. And this is without considering that the future of Italy concerns European Union stability and relations with the historical allies as well.