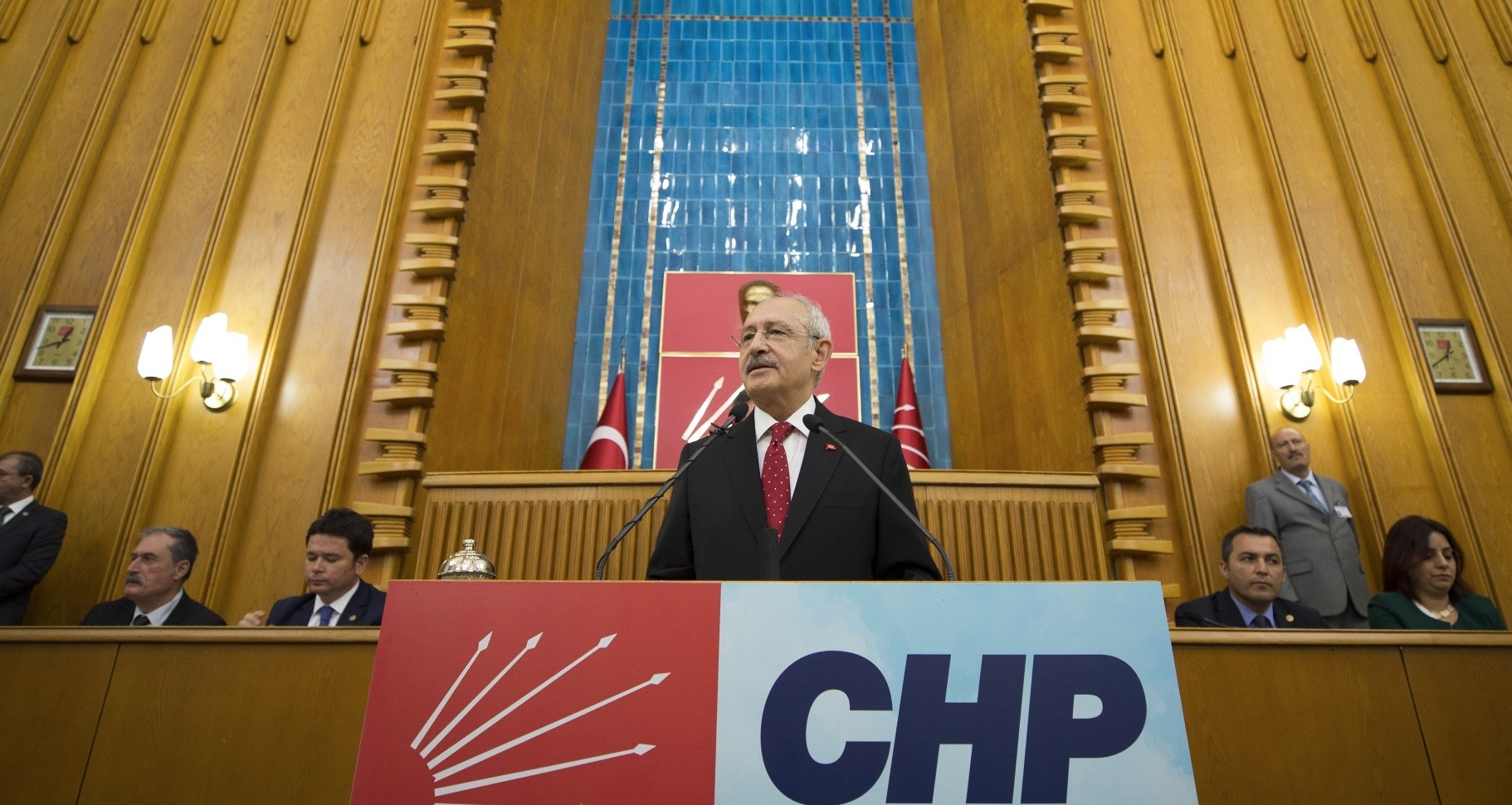 The upcoming November 2019 presidential election has once more underpinned political polarization and the struggle between political parties in the country. The political strategies of parties from different blocs either overlap or have clashed. In this politically tense atmosphere, Turkey has observed rapprochement between ideologically close political parties. In response to growing nationalist sentiments, the Justice and Development Party (AK Party) and Nationalist Movement Party (MHP) have converged their parties by aligning under one roof. It has long been asked if the second-largest party in Parliament, the center-left Republican People's Party (CHP), would follow this trend or opt for precious loneliness.

For the last two years, Turkey has visibly altered its interpretation of world affairs, particularly in foreign policy. This has also found repercussions at home. As nationalism has gained momentum due to Operation Euphrates Shield and Operation Olive Branch in northern Syria, there has been a mingling of ideologically adjacent parties. This has naturally led to the alliance of right-wing parties to start talking about possible collaboration. However, one cannot talk about the same convergence between left-wing parties in Turkey. At this point, we have detected three major reasons behind this dissension.

The first reason is connected to the very diverse and divided nature of left-wing politics combined with the lack of an updated ideology and charismatic leadership. The divided nature of politics on the left mainly stems from the CHP's own erroneous moves and strategic mistakes recently. For instance, in the previous presidential election, the CHP and MHP signed one of most politically bizarre alignments by nominating Ekmeleddin İhsanoğlu as their mutual candidate for president. The bases of both parties were not familiar with him, who, in fact, came from a very conservative background and was the former president of the Organisation of Islamic Cooperation (OIC).

Intrinsically, the alliance with the MHP did not bother CHP voters as much as who they nominated, which, from their point of view, marked a shift in the CHP position from being a center-left party to center-right. This was followed by a historic defeat in the election, which further divided the left-wing parties and leftist groups in Turkey. This defeat marked the lack of traditionally charismatic leaders, such as former Prime Minister Bülent Ecevit, who managed to establish a uniquely Turkish-style leftist nationalism through which he conquered the hearts and minds of both liberal and conservative voters.

The second reason concerns the CHP's inability to respond to demands from voters, which concluded with the emergence of dissenting figures in the party. Specifically, after the failed coup attempt on July 15, 2016, Turkey entered an era of political de-polarization. This helped mainstream parties come together at the Yenikapı rally in Istanbul, where they addressed the Turkish nation irrespective of their political background. Nevertheless, it can be said that the CHP's post-coup attempt strategy put a concrete end to the de-polarization period by generating divisive rhetoric, which did not find a response in the public. Hence, the CHP failed to provide leeway for political consolidation between the four major political parties in Parliament, which culminated in the fact that the CHP was left out by the MHP and the AK Party, and the Peoples' Democratic Party (HDP) had already been marginalized by the fact that it did not cut off its ties with PKK-affiliated terrorist groups.

This failure also resulted in intraparty disputes that further undermined the unity within the CHP. Accordingly, the growing opposition to the leadership of Chairman Kemal Kılıçdaroğlu was seen in a very tense party congress last month in which he managed to conserve his status as the leader. Despite his victory at the party congress, his leadership is still questioned by many, which marks another difference between the CHP from the AK Party and President Recep Tayyip Erdoğan, whose leadership is unquestionable.

The third reason concerning the CHP's inconsistencies in the interpretation of foreign policy, particularly regarding the ongoing war in Syria. The CHP leadership has taken a skeptical stance on Turkey's military operations in Syria, which, is widely supported by Turkish society. This has visibly intensified the ideological oscillations of CHP members as well as its base between traditional Kemalism and the new wave of nationalism in Turkey. This was followed by dubious statements from the party on Operation Euphrates Shield and Operation Olive Branch, which illustrated the lack of a clear foreign policy agenda. This has also emphasized the need for an alternative strategy to the existing implementation of Turkey's foreign policy, which the CHP has not been able to generate yet. Moreover, Turkey's evolving relations with Russia is also another concern for the CHP administration, which is traditionally a staunch supporter of Turkey's accession to the EU. Nevertheless, unable to challenge the status quo and outperformed by the ongoing AK Party government agenda, the CHP does not act as a bridge between EU institutions and Turkey.

Taking this ideological and structural crisis into consideration, it can be said that the CHP fails to find logical responses to the ongoing developments both in domestic and foreign affairs that would satisfy society. This has further isolated the CHP, which is practically left alone in its search to find allies. Given the very polarized nature of Turkish politics, the CHP finds itself in a political deadlock, which prevents the party from siphoning votes from the right. Moreover, other left-wing parties such as the Democratic Left Party (DSP), Communist Party of Turkey (TKP), Workers' Party (İP) and Freedom and Solidarity Party (ODP) are either too marginalized or their array of votes fall below the 10 percent threshold. Under these conditions, we offer four possible scenarios for the CHP's political campaign ahead of the presidential election.

Based on past election results for both parties, the first possible scenario is an alliance with the HDP, which would limit the collective votes to around 35 percent to 37 percent. In this scenario, it seems impossible to address the whole of society considering the marginalized position of the HDP. More interestingly, this would also irritate the leftist-nationalists within the party and would seem unpleasant for center-right voters who vote for the CHP.

The second possible scenario is an alliance with the conservative Felicity Party (SP), which would undermine the CHP's own foundational principles. In such a scenario, CHP voters may refrain from voting for the party, given such a coalition would be contrary to the secular and Kemalist-minded voters.

The third possible scenario is an alliance with the newly founded center-right Good Party (İYİ Party), which would mean an axis shift in the CHP's founding ideology. It is precisely because it may produce the same consequences as in abovementioned 2014 presidential election in which the CHP went into an alliance with the MHP and nominated a conservative candidate.

The fourth possible scenario is an alliance with relatively smaller left-wing parties such as the DSP, TKP, İP and ODP. However, in such a scenario, the CHP could run the risk of becoming too marginalized in the face of the growing nationalism in Turkey. Moreover, this would also fix its votes around 28 percent to 29 percent and would position the CHP from the center-left to the far-left.

In conclusion, the CHP administration is facing serious trouble both in its ideology and party strategy. It is our contention that this will put extra pressure on the CHP to decide whether it will run the campaign for the presidential election alone or align itself with other parties. In this regard, the CHP will have to decide whether its precious loneliness is feasible enough to win enough votes in the election, or will it sacrifice its ideology in the name of receiving as many votes as possible. It is up to them.