Speaking truth to power in Jerusalem 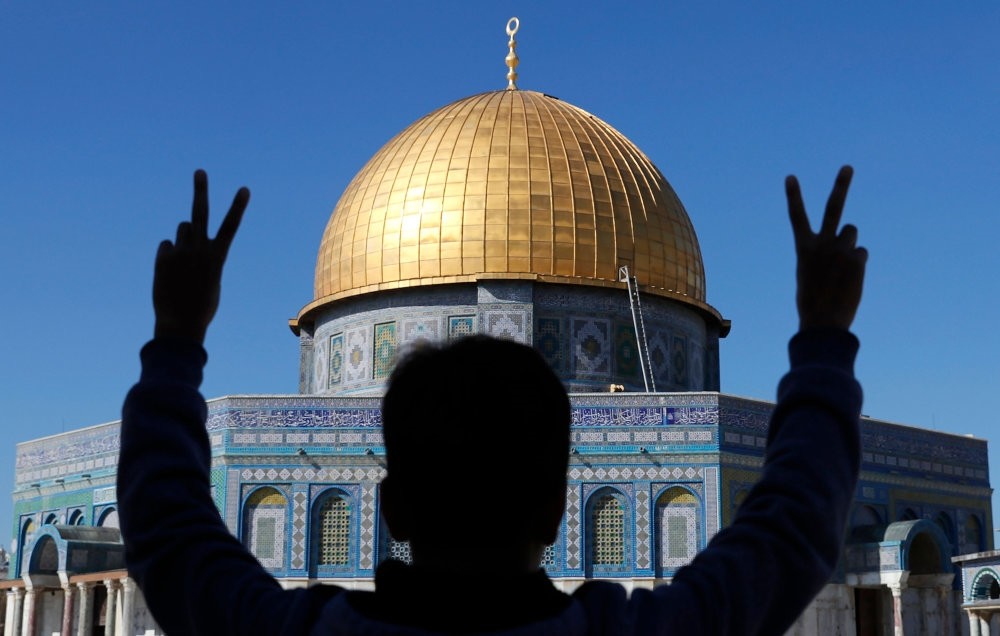 A Palestinian youth flashes the V for victory sign during Friday prayers in front of the Dome of the Rock at the Al-Aqsa Complex in Jerusalem's old city, Dec. 8, 2017.
by Mehmet Dursun Erdem Mar 21, 2018 12:00 am

Throughout its history, the ancient city of Jerusalem has come under attack and experienced occupation countless times. The most recent occupation took place in the 20th century, when Palestine, including Jerusalem, was taken from its native population, which consisted primarily of Muslims and Christians. Over the years, Palestinians came to associate the creation and territorial expansion of Israel with disempowerment, exile, discrimination, pillage and death. During the 1948 exodus alone, more than 700,000 Palestinians were forced to leave their native land. This process came to be known as the Nakba, Catastrophe in Arabic.

In recent months, the question of Jerusalem's legal status and ownership became the center of attention yet again, as U.S. President Donald Trump announced a unilateral and controversial decision to recognize Jerusalem as the capital of Israel and pledged to relocate the U.S. Embassy in Tel Aviv to the city of prophets. It goes without saying that the decision violated a number of past resolutions by the United Nations, which overwhelmingly voted in favor of a resolution condemning Washington's scandalous actions. At the same time, Turkey successfully lobbied the Organisation of Islamic Cooperation (OIC), which held an emergency meeting in Istanbul at request of President Recep Tayyip Erdoğan, to express solidarity with Palestinians. To add insult to injury, this act of provocation placed at risk peace and stability in Palestine as well as across the Middle East. After all, Jerusalem is the capital of the independent and sovereign state of Palestine currently under occupation.

Academics, like everyone else, have a responsibility to speak truth to power. Raising our voices against the most recent wave of attacks on Jerusalem, which is home to Jewish, Christian and Islamic holy sites, is not necessarily about politics. It is one's obligation to our civilization's history, our ancestors and our culture.

Against this backdrop of oppression, occupation and solidarity, the Second International Congress on Social Sciences will take place from March 23 to March 25. Jointly hosted by Gazi University, Al-Quds University and the Turkish Studies journal, the event will bring together leading academics and researchers in Jerusalem thanks to the generous support of the Turkish Cooperation and Coordination Agency (TİKA), the Turkish Historical Society (TTK), Hitit University, the Yunus Emre Institute and the Culture and Tourism Ministry. It seeks to raise awareness about Jerusalem's influence on Turkish culture and scientific projects developed by Turkish scholars. Moreover, it aims to provide fresh perspectives to academics by exposing them to the ancient city's historical, cultural and religious sites, promote closer cooperation between Turkish and Palestinian researchers and, by extension, facilitate the access of the Palestinian scientific community to international academia. It is our firm belief that joint scientific production could make valuable contributions to strengthening Turkey's already deeply rooted relationship with Palestinians and challenge the oppression, occupation and discrimination they continue to endure.

The Second International Congress of Social Sciences has three components. First, accepted papers will be presented by their authors over three days. Secondly, participants will visit Jerusalem's historical artefacts and holy sites with the help of professional guides. Finally, the organization committee will oversee the publication of a commemorative volume in print and online, which will contain the full texts of all papers presented at the event along with photographs from Jerusalem.

Under the umbrella of the Second International Congress on Social Sciences, seven symposiums will take place simultaneously on religion and society, information technologies and applied sciences, history and art studies, philosophy, behavioral and health sciences, economics, law and politics, educational sciences and applications, and language and literature. Over the course of three days, more than 400 participants from Turkey, Palestine and elsewhere are expected to present papers and share their knowledge in Turkish, Arabic and English on more than 40 subjects. Together, they will build bridges to strengthen Palestine's connection to the international academic world.

There is no doubt that their joint efforts will lay the groundwork for future cooperation, collaboration and partnerships, and create a sustainable relationship between Turkish and Palestinian academics through scientific production. At the same time, the event will significantly contribute to the international popularity of Turkish universities and institutions of higher education, promote closer cooperation between Turkish research centers and the international scientific community and provide an unparalleled international experience for Turkish scholars and academics.

Another important goal of the congress is to contribute to the peaceful resolution of the Palestinian question by engaging in academic diplomacy. At a time when Jerusalem's history, culture and identity are under threat, that a large number of Turkish academics and scholars will travel to the city to exchange views with their Palestinian colleagues alone is an unmistakable statement. By gathering in Jerusalem to attend this important event, hundreds of scientists and researchers will send a strong message to the international community that Palestinians are not alone and that the state of Palestine is more than just another pawn in great power politics. Indeed, they will reiterate Erdoğan's power to the United Nations that the world is bigger than five.

For those reasons, to peacefully stand up for the righteous cause of Palestinians across the board, including in academic circles, is absolutely crucial at this time. By taking more than 400 academics, researchers and scientists to Jerusalem, which is at times inaccessible even to individuals and small groups of visitors, Gazi University, one of Turkey's oldest academic institutions known as a great center of learning, Turkish Studies and Al-Quds University will facilitate the publication of more than 300 academic papers and also take an important step toward reaching a total of 1 million people, directly and indirectly.

There is a school of thought that views academia as isolated from the outside world, detached from society and indifferent to the suffering of people around the world. We respectfully disagree with that view. By contrast, it is our firm belief that academics must serve as ambassadors of peace who promote stability, security and openness around the world, not just in their own societies. With an eye on this crucial mission, the Second International Congress on Social Sciences will bring together scientists who share our enthusiasm and concerns about the situation in Jerusalem, and help raise awareness around the world about the deafening silence surrounding the ancient city where ever-deepening injustice looms large.

* Professor of Turkish language and literature at Gazi University