Turkey's possible entry into EU should not be blocked 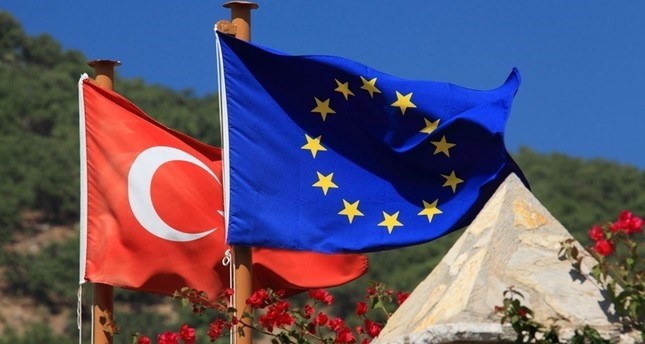 Europeans must part ways with feudalism and embrace Turkey, which had cordial relations with Europe for centuries and deserves better than being a punching bag

The Turkey-EU association agreement of 1963, the economic based customs union agreement of 1995, and Turkey's recognition as a candidate for EU membership in December 1999 are indications of a sincere desire for both the Turks and Europeans to coexist. The politically based announcement of the European Council in 2002 for Turkey to meet "Copenhagen" criteria was the climax for a possible green light. Since then, Turkey had successfully passed most of the reform packages in Parliament to be ready for negotiations by the end of 2004. Turkey accepted the U.N.'s plan to end the division of Cyprus and has taken firm steps for a stable democracy, which includes ending human rights violations, respecting ethnic minorities and upholding the rule of law.

Turkey has received positive and promising feedback from EU leaders. However, some have still expressed concerns, arguing that Turkey's culture and traditions are not compatible with Europe's. President Jacques Chirac, despite his favorable approach to Turkey's membership, has shown no patience for possible EU negotiations with Turkey, promising the French a separate referendum on Turkey's acceptance at least a decade in advance in order to secure his position and appease his Union for a Popular Movement (UMP). Emmanuel Macron's approach is not that different from that of Chirac, suggesting a partnership rather than full membership. Austrian President Heinz Fischer has expressed his concern and argued that the EU is not ready to accept Turkey before it assimilates 10 other new members. Austria's Prime Minister Sebastian Kurz was even harsher, criticizing Turkey for not paying respect to human rights and therefore suggested that talks on Turkey's entry to the EU should be brought to halt. The Christian Democratic Union (CDU) of Germany has argued against full membership and proposed privileged partnership, while the Vatican has expressed concern with regard to the preservation of Europe's Christian heritage if Turkey is accepted. Still more Angela Merkel, the prime minister of Germany in October 2017, pressed very hard to win the majority in EU's Parliament in order to bring negations with Turkey to a halt. All these critiques pose a threat to both negotiations and Turkey's possible entry to the bloc.

Looking back on all of these negative approaches, it is no wonder that Prime Minister Binali Yıldırım pointed out that despite Turkey's best efforts, the EU-Turkey Leader's Meeting of March 26, 2018 was not promising and certainly not fair. In fact, this outcome was already foreseen by columnists both in Turkey and Europe. Clearly the talks delivered by European Council President Donald Tusk and European Commission President Jean-Claude Juncker were political rather than sincere. They were certainly unfair in questioning the implementation of fundamental freedoms in Turkey and particularly questioning Turkey's involvement in Syria, ignoring the fact that Turkey has brought peace and tranquility to Afrin. France, Germany, Austria and other EU countries should set aside differences and consider the important contribution that Turkey can make as a valuable ally that will act as a balancing force in the EU with its predicted number of seats and save Europe from becoming a Christian club.

There is clear historical evidence of friendly relations between Turkey and most European countries, which strongly supports the case for the likelihood of peaceful coexistence in the future. Up to 1915, Turkey enjoyed strong commercial and cultural ties with Britain and France — a rapport which was only severed when Britain and France forced their way through the Dardanelles to join forces with the Russians against the Ottoman Empire, thus forcing Turkey to side with the Germans. Britain and France occupied Iraq and Mosul, while France occupied Syria and southeastern Anatolia in World War I, during which time they armed and mobilized the Arab and non-Muslim subjects of the Ottoman Empire against the Turks, forcing many to flee and take refuge in the mountains. Turks have learned to forget the British occupation of Mosul and Kirkuk where still many Turks live, as well as the French occupation of Marash and Urfa where the agricultural heart of Turkey beats with dams built on the Euphrates. They would rather remember the French for refusing to join forces against the Ottomans with the Venetians whose trade activities were stopped in the Aegean by Mehmed II (1451-1481) because they were threatening both Ottoman and European interests.

Similarly, historical events demonstrate that the French have benefited considerably from favorable relations with Turkey. These events go back as far as the 16th century when Suleiman I, upon the recommendation of the pope, supported Francis I of France instead of the Hapsburg Charles V, both of whom were contenders to the throne of the Roman Empire in 1521. Suleiman generously extended freedom of trade within the Ottoman Empire to the French in 1535, and later commercial privileges were granted to other European countries which had earlier traded under the French flag. By the end of the century, French trade activities supplanted those of Venice, and their vessels trading in the Ottoman territories generated an income equal to half of France's total trade. Ottoman-French relations were extremely influential: Turks copied French-style furniture, art and architecture, while the Ottoman military adopted French textbooks and modernized accordingly, and French became the language of elite circles and bureaucrats. Germany and Britain have also enjoyed strong relations with Turkey. After the Balkan Wars from 1912 to 1913, Germans helped Turks rebuild their army and later built a railway line for the Ottomans stretching from Berlin to Baghdad, while the British acted as advisers for the Ottoman navy.

Now it is time for Europe to show its gratitude and extend a helping hand. Turkey's entry into the EU will be advantageous for most, if not all, European countries, particularly Germany and France. Both Germany and France with their long-standing policies and interest in the Middle East have the potential to liberate themselves from the lobbies of fundamentalist, nationalistic and religious groups, make independent judgments and support Turkey's acceptance into the EU as a Muslim country with a secular government modeled on French laicism and democracy. France, particularly with its positive approach to Turkey, no doubt will gain power and prestige in the eyes of not only other members of the EU, but also of Arabs in the Middle East and North Africa with whom it has long-standing historical relationships. Such a step, in the long run, will lessen the tension between its native French and Arab citizens, particularly those of Algerian origin. As such, France can prove to the other members of the EU that laicism works perfectly well for both for itself and Turkey. Indeed, Turkey has successfully kept religion away from the political arena and has been able to maintain peaceful relations between its 99 percent Muslim population and 1 percent non-Muslim population, notably by supporting freedom for individuals to practice their own religions. This in itself is proof of strides toward democratization that even some of EU member countries have not been able to achieve. Turkey as a regional power established successful peace through Operation Olive Branch in Afrin and hosts almost 4 million refugees from Syria and Iraq, proving that it can bring peace to the region and also pave the way for peaceful and close relationships between Muslim countries and Europe. No doubt every country deserves and is in need of peace. Ultimately, suggesting or holding a referendum in any European country, as France has done in the past, on the issue of Turkey's acceptance into the EU would be unwise as it would allow scope for Christian conservatives to vote against a country which they wrongly see not as secular, but Islamic.

A decision in Turkey's favor on the part of European countries will also put an end to the negative lobbies against Turkey and save their parliaments from unnecessary and disturbing discussions. Such a decision will also provide opportunities to European countries to contribute not only to political development in the Middle East and Central Asia, but also to the peace process in the former, and development and democratization in the latter. They could also contribute to solving the Cyprus question and demonstrate to all EU members that the referendum in Cyprus that blocked the acceptance of Cypriot Turks but not Cypriot Greeks into EU was neither democratic nor the solution to the problem. Rather, it aggravated the relationship between the two communities.

Living in the 21st century should mean leaving behind the feudalism of the Middle Ages and the devastating two world wars that followed industrialization. It is now time for the nations of the world to reconcile, putting aside their religious, ethnic, racial and economic differences. The formation of the European Union should be taken as a sincere step toward a global peaceful existence. Bearing in mind this concept, none of the member countries of the EU, let alone France or Austria, should block the way for negotiations with Turkey and its possible admission into the EU.