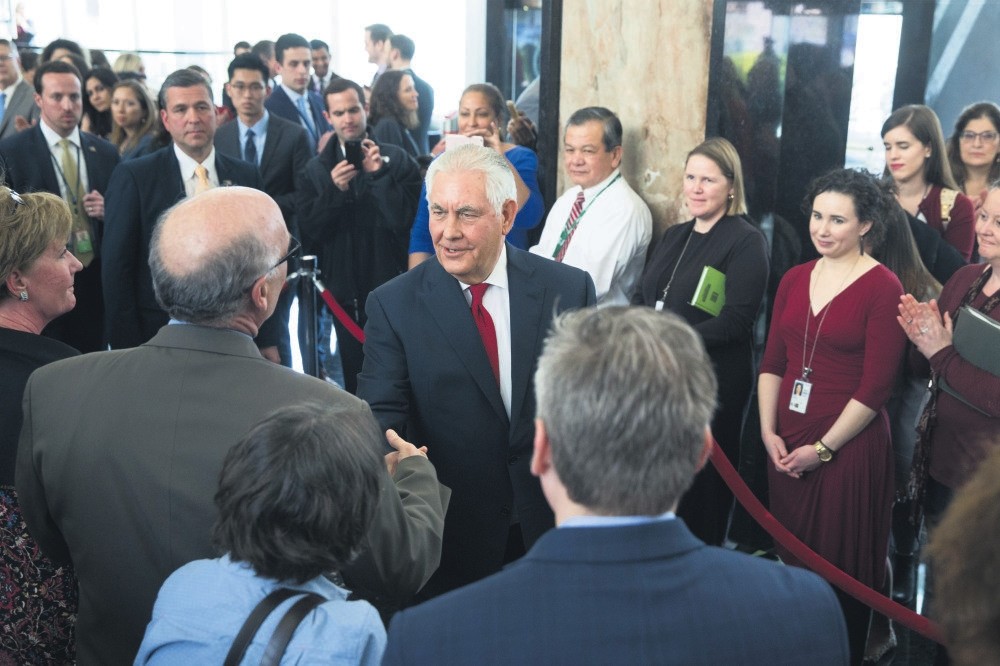 President Trump has come up with a new kind of diplomacy, of sharing tweets on social media to either shape U.S. foreign policy or fire his top officials whenever he finds it necessary

On March 24, 2018, U.S. President Donald Trump held a press conference on spending bills. It was interesting that his previous press conference had taken place on Feb. 16, 2017 – more than a year ago. Keeping in mind Trump's disdain for the media, perhaps this should not be considered surprising. Over the past year, the U.S. president found another way to announce his decisions and share his views on foreign policy with the American people and the world: Twitter. This has come to be known as Twitter diplomacy, which appears to be a core component – perhaps the only component – of Trump's legacy.

In recent months alone, Trump has turned to social media to voice support for the Qatar blockade, make the case that the mounting pressure on Doha was a direct outcome of his visit to Riyadh, threaten North Korean leader Kim Jong Un by bragging about the size and effectiveness of his nuclear button, repeatedly attack the "fake news media," argue he is "a very stable genius," humiliated Pakistan and, more important, sack members of his administration.

Since Trump assumed the presidency on Jan. 20, 2017, no less than 19 people from the administration and the White House staff have been fired or forced to step down, including Secretary of Veterans Affairs David Shulkin, who was fired last week via Twitter. At least nine others have resigned. Those numbers suggest that the Trump administration is the most unstable presidency in U.S. history.The ongoing series of high-profile resignations and firings started with National Security Advisor Gen. Michael Flynn, who was forced out on Feb. 13, 2017. In March 2018 alone, five others were either sacked or compelled to step down, including two key members of the administration – Secretary of State Rex Tillerson and National Security Advisor H.R. McMaster. Tillerson apparently learned that he was fired over Twitter while in Africa. Briefly thanking Tillerson, Trump also wrote that Mike Pompeo, the previous CIA director, would be the new secretary of state. Just eleven days after this tweet, Trump's second national security advisor, Gen. McMaster, was forced to resign. Trump shared via Twitter that starting from April 9, McMaster will be replaced by John Bolton, a previous U.N. ambassador during President George W. Bush's time in office.

Again, on March 28, less than one week after McMaster, Trump announced the replacement of Secretary of Veterans Affairs David Shulkin with Rear Adm. Ronny L. Jackson, who has been serving as the White House physician for years. Interesting enough, and outrageous for the Trump administration, is the fact that while White House Deputy Press Secretary Lindsay Walters told the media that Shulkin resigned, Shulkin himself denies it.Turning to foreign policy, Tillerson and McMaster were among the main figures in the Trump administration, and the same can be said for Flynn and Steve Bannon.

Unfortunately, their end was similar. It appears Trump is replacing top officials with high reputations in the private sector who were part of the administration at the beginning of the presidency. While they were important at that time and Trump could turn a blind eye to their differences, now these top officials are replaceable with lower stature people but who have the same ideas as he does and, most importantly, will be more loyal than Tillerson and McMaster, especially when Trump is planning to make important foreign policy decisions, namely in terms of Iran and North Korea.

The main reason behind the firings of Tillerson and McMaster was the divergence these two officials had with the president regarding foreign policy. Trump and Tillerson disagreed on many points, e.g., the Qatar crisis and the nuclear deal with Iran. McMaster found himself at odds with Trump in terms of the escalation of war in Afghanistan. Once Trump even criticized McMaster publicly on Twitter for saying that the proof that Russia interfered in the 2016 presidential election was "incontrovertible."

Tillerson and McMaster, accompanied by current Secretary of Defense, James Mattis were considered as key actors to balance Trump's fickle foreign policy decisions. Now the Trump administration is taking a hawkish turn as the substitutes for Tillerson and McMaster, Pompeo and Bolton, respectively, are more hardline with hawkish views and more amenable to Trump's unstable Twitter diplomacy. How long Pompeo and Bolton will last in their positions is unknown, but it should not be a surprise if they are fired as well. Both Pompeo and Bolton do not share the same positive look on Russia as Trump does. Moreover, Bolton has advocated pre-emptive strikes on Iran and North Korea, which is a more hawkish view than that of Trump.

As time has passes, Trump is starting to be more confident in his what he believes to be foreign policy capabilities and his juvenile tweets show us that despite him being the commander-in-chief, Trump has started to consider himself the diplomat-in-chief who can conduct diplomacy via Twitter. In October 2017, Trump wrote on Twitter that while Tillerson was wasting his time with the "Little Rocket Man" – referring to the leader of North Korea – only Trump would be the one that would not fail. Of course, such comments negatively affect the credibility of officials in the Trump administration. Still, for Trump, this seems to not be a problem as his family members are the only constant in his administration, and it is through them, namely son-in-law Jared Kushner and daughter Ivanka Trump that Trump conducts his foreign policy.